The Daily Barometer • May 25, 2019 • https://dailybaro.orangemedianetwork.com/4663/daily-barometer-sports/osu-baseball-ends-season-with-series-loss-to-usc/ 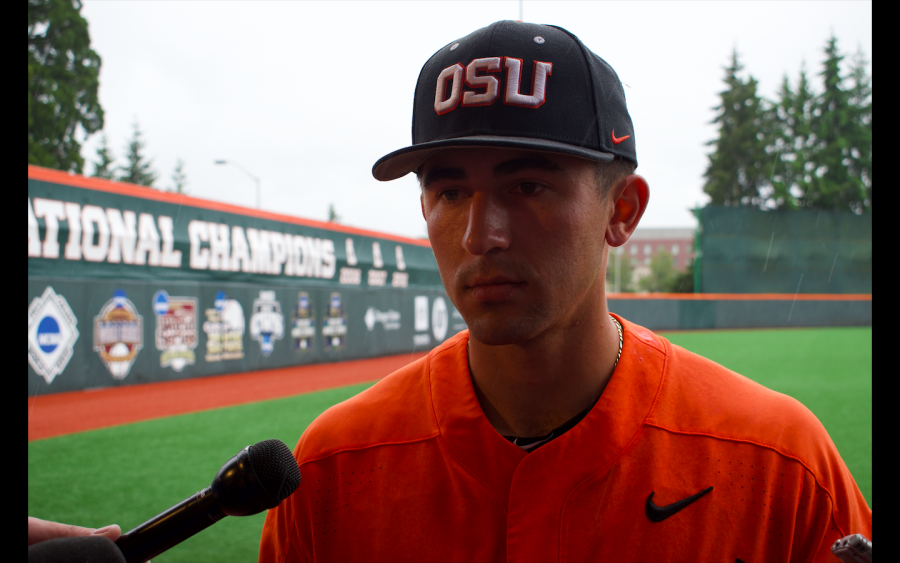 OSU Junior infielder Beau Philip talks with the press after Oregon State's 5-0 loss to USC on Saturday. The day prior, Beau helped the Beavers earn their solo series win against the Trojans by nailing a home run over the left wall, which landed on a fans windshield in the process.

No. 12 Oregon State Baseball was unable to close out their regular season with a series win against USC this weekend at Goss Stadium, losing the third game of the series with a final score of 5-0.

The reigning College World Series champions ended their 2019 season with an overall record of 36-18-1, going 21-8 in-conference.

This was the second time in the series that OSU was unable to score any runs. In the game, USC struck first in the second inning with a run, then again in the sixth.

In the seventh inning, the Beavers had a chance to put some points on the board when redshirt-sophomore George Mendazona singled out to middle field, sending junior infielder Tyler Malone to third base. However, OSU was unable to convert.

According to junior infielder Beau Philip, he and the team want to move on from these losses and hope they’re able to host the NCAA regionals once again.

“Obviously we’re disappointed in our performance but it is what it is, and we’re going to put it behind us and continue on our journey,” Philip said.

In an eventful bottom if the eighth, OSU Interim Head Coach Pat Bailey was ejected from the game after the officials questionably called Zack Zalesky out on a ball in a dirt.

“We need to be more competitive at the plate with runners in scoring position,” Bailey said. “We’ve had an issue with (situational offense) probably the last five, six games. That was a big issue.”

Undergraduate assistant Bill Rowe also ejected from the game by the officials. Bailey will not serve a suspension for his actions, but Rowe will be required to miss their next contest.

In the top of the ninth inning, things started to fall apart for OSU. Senior infielder Zak Taylor scooped up a ground ball near first and looked to throw to second but hesitated, only to mistakenly tossed the ball to first when the Beavers weren’t expecting it, allowing USC to get to third. On the next play, the Trojans converted on a sacrifice bunt, and that’s when fans started packing up their things.

Oregon State Baseball will find out who they’re playing against in the NCAA Regionals tomorrow morning.