Survivors, allies take back the night 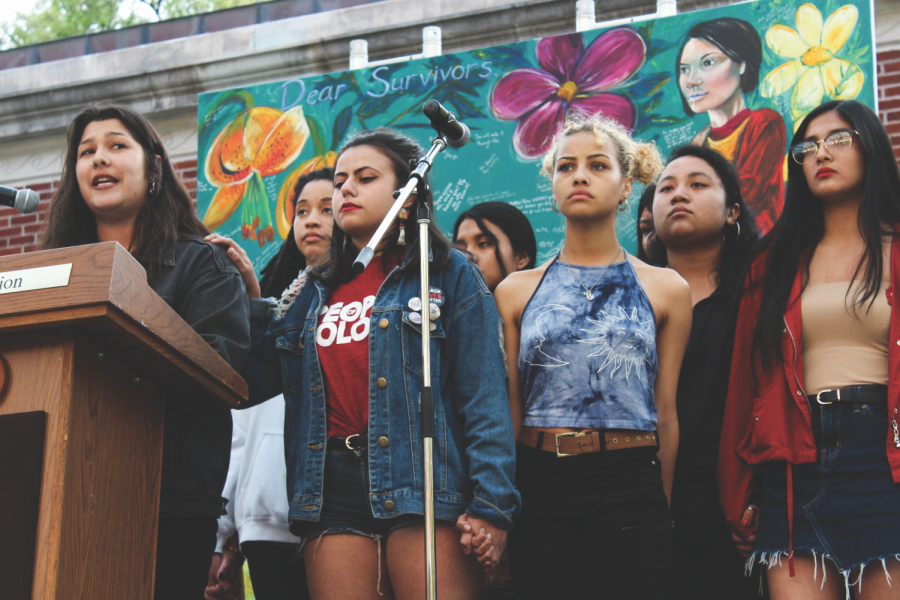 Marching through campus, survivors and allies rallied to take back the night on Thursday.

Take Back the Night, a yearly event held at Oregon State University during sexual assault awareness month, brought survivors and allies together to declare that sexual assault will not be tolerated. Through sharing their stories of assault and healing, survivors are able to feel heard and believed by their allies.

Maddie Hansen, coordinator for  the sexual assault awareness month events and graduate assistant for the survivor advocacy resource center, opened the event with a small introduction explaining the purpose of the night. Hansen said that she wanted Take Back the Night to make survivors feel supported, heard, and believed.

“Trauma is with you your whole life and having support is one of the only ways to get through it,” Hansen said.

After the welcome by Hansen, three speakers stepped up to the microphone to inspire and inform the audience. Indica Stephenson, a student speaker, was first to speak followed by Mehri Shirazi, a member of the Women, Gender, and Sexuality Studies Department, and finally activist Melissa Bird was last to address the audience.

After the speakers presented, the crowd gathered to march around campus to rally against sexual assault and raise awareness. Led by volunteers, survivors and allies marched side by side while chanting to make themselves known. Upon returning to the SEC Plaza, the speak out portion of the event began.

During the speak out, anyone is welcome to go on to the stage and talk about their experiences or feelings. Many chose to share their stories of assault, some explained their healing process, and others offered words of encouragement to survivors.

Kimberly Hack, advocate for the Survivor Advocacy and Resource Center, participated in her first speak out in college. Hack said that while she was extremely nervous, she knew that it wasn’t important how eloquent she was, it only mattered that she was able to share her experience and feelings. By telling their stories, Hack believes survivors are breaking stigmas around talking about sexual assault while also expressing themselves in a place full of people who chose to be their to support survivors.

“Even if you’re telling complete strangers in the audience it can be really amazing and empowering just to be you and share that piece of yourself,” Hack said.

Hack suggests to those who know a survivor that one of the best ways to support them is to listen without judgement and believe them. According to Hack, it doesn’t have to be hard, supporting a survivor can be as simple as attending an event such as Take Back the Night with them.

Tarantino Pachote, OSU student and attendee of Take Back the Night, said that it’s hard to know how someone is feeling when they’re going through a difficult experience, so attending the event is a good opportunity to be informed and understanding about the experiences of survivors.

Remi Foggetti, OSU student, said he attended the event because he believes it’s important to address this issue now. Foggetti said if people don’t know about it and learn about it, sexual assault will continue to occur.

“You should want to be educated about this,” said Foggetti.