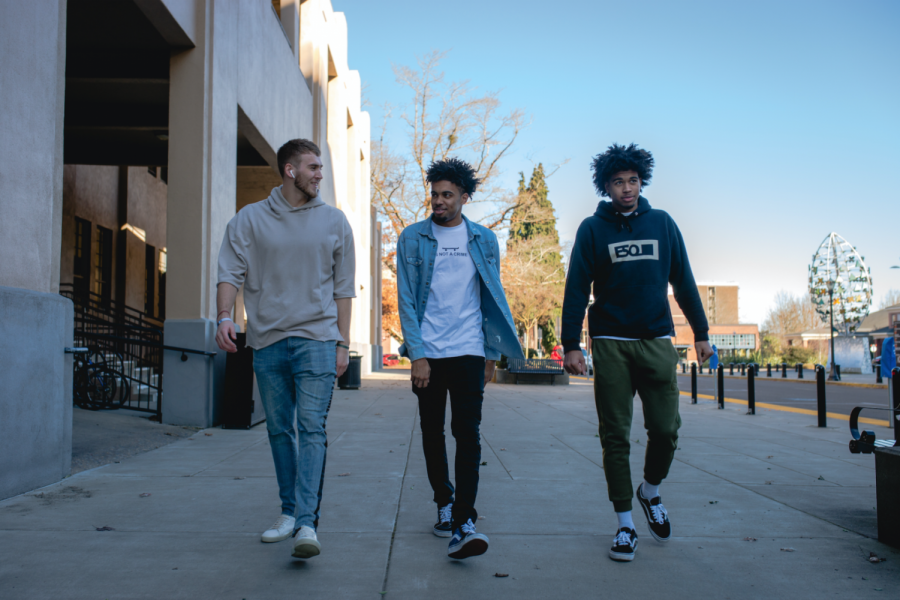 Being the few players on the team who occasionally dress up on gameday, Tinkle, Ethan and Thompson Jr. dive deeper into sports fashion and the benefits of dressing up before dressing down.

Before their final home game of the 2019 season and Thompson Jr.’s last career bout in a white uniform, the three stars came together to serve some looks outside of Gill Coliseum.

Gameday fashion can mean many different things to the player sporting the look. Some follow the philosophy ‘look good, feel good, play good,’ while others use clothing to represent who they are.

According to Tinkle, who is from Missoula, Montana, his hometown was judgemental of fashion outside of the standard jeans and a flannel.

“Dressing up is a cool way to express yourself,” Tinkle said. “Being a part of basketball culture, I saw players dressing up and thought it looked good. If I were to wear what they wore back home, people would look at me weird.”

After moving to Oregon to play basketball for OSU in 2015, Tinkle’s interest in fashion was sparked by the accepting Corvallis community, making it easier for him to wear what he wanted.

“One of my favorite things to do on my own time is cutting up my own jeans,” Tinkle said. “I’ve cut jeans for a lot of the football players, my friends and teammates. It’s just fun to be creative in that sense and has become a hobby of mine.”

Although personal representation through clothing is a statement for Tinkle, Thompson Jr., uses his wardrobe to get into the right attitude and mindset before the game.

“I try to feel good, look good walking in and boost my confidence when it comes to the game. I have to get into that mind-state early,” Thompson Jr. said.

Both star basketball prodigies from Los Angeles, the Thompson brothers look to Southern California based style as a fashionable representation of their own.

“I find inspiration from a lot of SoCal people,” Thompson Jr. said. “I don’t like to get too drastic with the colors and things like that. But, I try to look nice.”

As most collegiate players do, Tinkle and the Thompson brothers generally draw inspiration from the professional athletes they grew up watching as kids. For the Thompson brothers, looking up to certain NBA players such as Nick Young, a guard for the Denver Nuggets known for his far-out wardrobe, helps find fun and intricate outfit ideas to wear before games.

“I’ll probably just throw something on that looks nice,” Ethan said. “A nice pair of Vans to match the shirt I’m wearing, Vans are definitely my go-to shoe. “

Along with having a stylish reputation, comes a large social media presence. According to Tinkle, who highlighted his style by featuring yellow pants with a blue and green Nike windbreaker jacket, he likes to stand out for his followers.

Fashion does not always have to be based on a person’s public image. A person’s outfit of choice can be based on many different factors, including their schedule. A busy day can be the difference between sweats and a pair of jeans. Men’s athleisure has been a recent trend that has taken comfort to a whole new meaning.

“One of the first things people notice when they look at you is your style,” Tinkle said. “If I do wear sweats, I still have a nice shirt and shoes on, a kind of comfortable swag.”

According to Tinkle, his gameday fashion depends on the mood he is in. He will often wear sweats to the gym if he is coming straight from class and wants to be comfortable. However, If Tinkle has time to get ready, he will throw on a more intricate outfit. For the junior guard, that’s usually a pair of jeans, a clean pair of shoes, shirt and a jacket.

When asked who has the best fashion sense on the team, all three players pointed at each other. Thompson Jr. admitted he wanted to say himself, but voted Tinkle and Ethan instead, taking himself out of the equation. His brother had a similar idea.

“I would say that Stevie has the best fashion sense because we have a similar style, outside of myself,” Ethan said. “Tres as well, he has a pretty nice style too.”