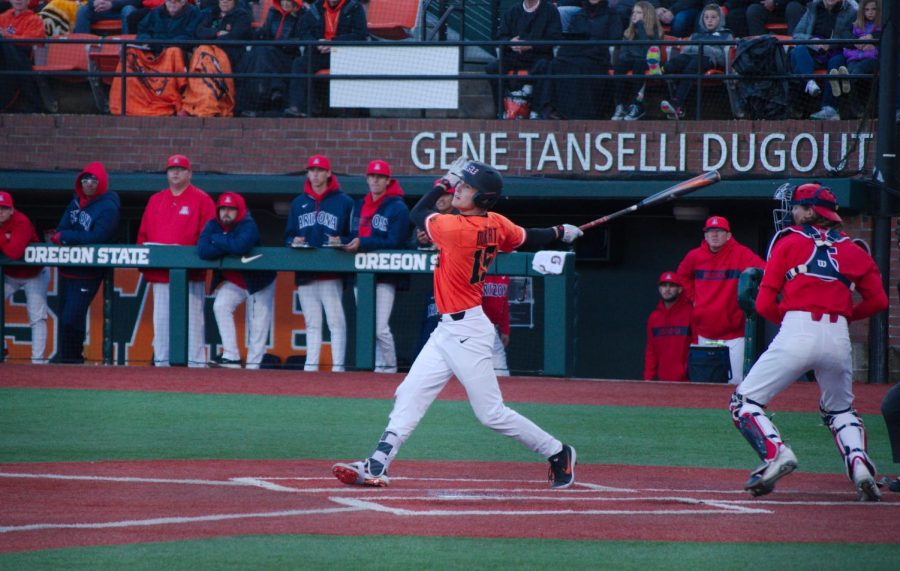 Despite making just 19 appearances in the previous 36 games, freshman third baseman Jake Dukart made himself known to the Wildcats, ending the series with five hits and two RBIs.

No. 2 Oregon State Baseball came out and won the final game of their series against Arizona in front of a sold-out crowd at Goss Stadium, taking the series and the win with a score of 9-3.

The Beavers wasted no time in building their lead, with consecutive singles by sophomore catcher Troy Claunch and sophomore right fielder Elliot Willy scoring three runs, making the score 3-1 at the bottom of the first.

After an Arizona run in the top of the fourth inning brought the score to 4-2, the Beavers reacted quickly. In the bottom half of the inning, junior infielder Preston Jones hit a solo home run over the left fence.

With a 5-3 lead in the top half of the sixth inning, the Beavers’ two run lead was in jeopardy. That was, however, until Jake Mulholland came into the game.

“I thought the key to the whole game was when Mulholland came in with the bases loaded and no outs and we got out of it without giving up a run,” Interim Head Coach Pat Bailey said. “The player of the game for me was Jake Mulholland.”

Mulholland’s ability to quickly end the sixth jam proved pivotal, as OSU would score three runs in the bottom half of the inning.

A double by junior first basemen/catcher Adley Rutschman was followed by sophomore designated hitter Ryan Ober and Willy singles – the hits combining to bring three runs across home and extending the Beavers’ lead to 8-3.

Despite making just 19 appearances in the previous 36 games, freshman third baseman Jake Dukart made himself known to the Wildcats finishing the series with five hits and two RBI’s.

“I struggled a little bit early, kind of had to wait my turn, and finally got that chance last weekend to contribute to the team and had a solid day at the yard today,” Dukart said. “Just helping win ball games.”

After another run in the ninth inning, Oregon State ended the game with a strikeout by sophomore pitcher Mitchell Verberg sealing the 9-3 victory.

During the game, it was announced that the attendance for Saturday’s game was 3,931 – a record breaking sell-out crowd that is the fourth largest in Goss Stadium history and the most ever in the regular season.

The Beavers return to Goss Stadium on Friday, April 26, where they will start a home stand beginning with a matchup against Washington State.