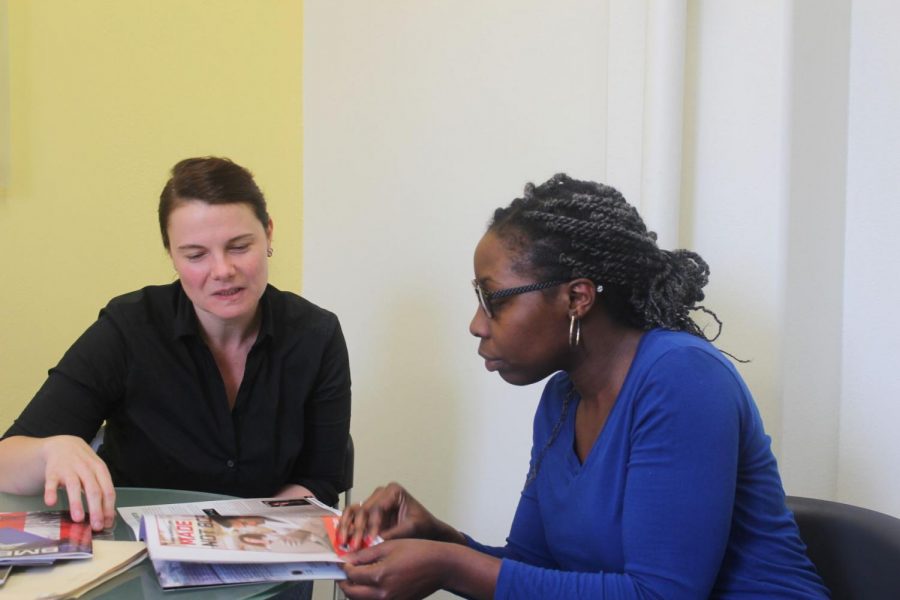 On Oct. 11, the College of Science recognized and celebrated research and administrative excellence at its 2018 Fall Faculty and Staff Awards ceremony and reception.

The college holds seasonal faculty and staff award ceremonies that range in a variety of different accomplishments. From research and administration to teaching and advising, the College of Science recognizes faculty who have done outstanding work in their field.

“This is an important ceremony because it recognizes research and excellent administration across the college,” said Debbie Farris, director of marketing and communications.

Formerly known as the College of Science Impact Award, the Science Research and Innovation Seed Program (SciRis), provides funding in three stages and awards collaborative research teams anything from $10,000 to $125,000 for various stages of their research proposal.

Four research teams won the SciRis award in the Fall. Their work in projects relating to human health, drug development and marine science contributed to the SciRis achievement.  Each team received an amount of $10,000 to go towards bettering their research initiatives.

Assistant Professor of mathematics, David Koslicki, and Thomas Sharpton, assistant professor of microbiology and statistics, received the SciRis award for their work in the analysis of voluminous microbiome data with the goal of understanding, and potentially engineering, the microbial effect on human health and environmental processes.

They have been honored for their work in the area of metagenomics, the study of genetic material recovered directly from environmental samples.

“It’s great to have the dean and the college recognize the potential in the project that Tom Sharpton and I proposed and to have their support in developing potentially transformative computational methods in the area of metagenomics.”

According to Koslicki, the team is using this award to fund the development of a new computational approach to quickly determine what genes are produced by a community of bacteria, thus figuring out what the bacteria are doing. Instead of slowly comparing DNA sequences one-by-one to previously seen genes and proteins, Sharpton and Koslicki aim to significantly speed up this process by creating a ‘fingerprint’ of all the DNA of all the bacteria in the sample. This fingerprint can then be used to quickly figure out which proteins were in the sample to begin with.

Assistant Professor of Chemistry, Sandra Loesgen, and Assistant Professor of Integrative Biology, James Strother, are collaborating on a project that will identify microbial natural products with pain-relieving activity. According to Strother, their project seeks to identify novel compounds that alter how painful or stressful stimuli are processed, which could lead to new pharmaceuticals for treating conditions such as chronic pain and anxiety.

The project combines the Loesgen Lab’s expertise with natural products and the Strother Lab’s experience in neuroscience to forge a new approach for neuroactive drug discovery.

According to Strother, the SciRis Award will enable them to scale up and substantially accelerate their research by helping them purchase the materials they need to streamline the process of testing compounds.

Strother said these new drug leads could serve as alternatives to opioids, which are effective but very prone to issues of dependency and misuse.

Associate Professor of Integrative Biology Francis Chan and Stephen Giovannoni, Distinguished Professor of Microbiology, are pursuing research on oxygen declines in the ocean, which are associated with climate change. These oxygen declines are called hypoxic events. They sometimes happen after phytoplankton blooms. On the Oregon Coast, hypoxic events have happened more frequently in recent years and are a threat to local fisheries and coastal ecosystems. Giovannoni and Chan are studying the biochemistry of oxygen declines to identify the causes in order to make more accurate predictions of future hypoxic events.

“We’re using the money to perform and experiment that we hope will help us prove that our ideas about how oxygen minimum zones form are correct.  But we’re testing a hypothesis, so the results might also prove we are wrong, that is how science works,” Giovannoni said. “I’m glad we have these awards and am very proud to be part of the College of Science community, where I can be a scientist, teaching, learning and discovering.”

On Wednesday, the team were out on the OSU Research Vessel Elakha, collecting seawater so that they can simulate a natural phytoplankton bloom in the lab.

Assistant Professor of Microbiology Maude David and Kenton Hokanson, instructor of microbiology and biochemistry and biophysics, are involved in molecular research for the purpose of address anxiety disorders. These disorders affect 40 million people in the U.S. Although women are twice as likely as men to suffer from anxiety disorders, most research at the molecular level has exclusively studied male humans or animal models. The goal is to identify specific mechanisms underlying sex-differences in diseases affecting behavior.

“It is always difficult to get that first foothold as a new researcher, especially when trying to launch a novel or interdisciplinary project. The SciRis award provided support and encouragement at a critical time, and we are very grateful for it,” Hokanson said.

According to Hokanson, the team is researching the connection between the microorganisms that live in the human gastrointestinal tract and the development of conditions such as anxiety. His collaborator, David has identified microbes that are either less or more prevalent in children with neurological disorders.

With the support of the SciRis award, they are investigating the impact of one of these microbes on the behavior and neuronal electrical activity of mice. If they discover that the microbe alters brain function in mice, this research may help them understand the development of diseases in humans and point towards possible treatments.

“This award means that the college of Science is investing in basic research funding and believes this project is a good fit for this goal” David said. “It is encouraging and gives us the means to do this research, because without this type of funding, it would be difficult to implement this high risk / high reward type of project.”