Comeback kid in the outfield 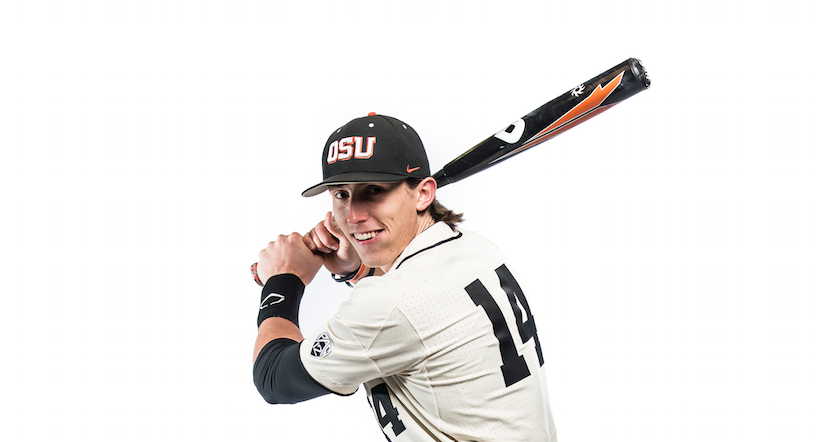 After being in recovery for six months, redshirt-sophomore outfielder Elliot Willy of the Oregon State Baseball team had his first official home start this season March 1, against West Virginia, a moment that was inches away from never happening.

In the summer of 2017, Willy was working 30 feet up on top of his grandfather’s grain bin in Pullman, Wash. because it wasn’t shooting grain correctly. Since there wasn’t much for him to hold on to, he balanced himself by putting his hand on the machine, but it unexpectedly started before he could clear his hand. His hand got accidentally caught in an auger wheel and lost a part of his right index finger.

“Once I realized what was happening, I pulled my hand out and that’s when everything was all cut up,” Willy said. “My index finger was cut and hanging on by skin threads, my penden and my middle finger were lacerated, my ring finger was broken and my pinky was just bruised,” Willy said.

Initially, Willy’s first reaction was to sit on top of the 30-foot grain bin and wait for help. Be he realized that he was the only person who could get himself down. Once he got down, Willy went to his mom, Theresa Willy, and the two of them tried to stop the bleeding and rushed to the hospital. According to Willy, the doctors claimed they did not have the tools or training to save any part of his finger, so he and his mother life flighted to Harborview Medical Center in Seattle.

According to Willy, the life flight surgeon told him that if the pieces of his finger were not getting at least 60 percent oxygen, they were going to amputate it.

“I was hoping that the doctors could fix what they needed to fix. I was trying to be optimistic,” Theresa said.

Willy added that not only was his injury a physical adjustment, but dealing with the mental aspect of recovery was just as hard.

“They said they had done a partial amputation and I didn’t really know what that meant until I took the bandage off a week later,” Willy said. “During the first couple weeks, mentally understanding it’s gone now and there’s nothing I can do about it and mentally grasping the fact that I don’t have a finger there anymore was one of the biggest things.”

Willy said that some of his biggest fears about the injury were not being able to do activities such as play baseball, but Elliot’s father, Roy Willy, helped ease his son’s doubts by putting a rubber band around his own finger to mimic Willy’s damaged hand.

“He went out in the backyard and played catch with my little brother and he told me don’t worry about baseball, you’re going to make a full recovery and you’re going to be the same player you were before you lost your finger,” Willy said. “Every step of the way, there was no doubt in his mind that I was going to play again and since he believed it, I believed it.”

According to Roy, he never doubted his son would play baseball again, as Willy still had much talent and determination left with his nine and a half fingers.

“It didn’t look like it was a substantial impediment, so I think that may have motivated him even more,” Roy said. “It was not a question of if he had what it took, it was a question of opportunity.”

After his surgery, Willy was unable to play from August 2017 to February 2018, and during that time he was itching to get back on the field.

“It felt incredible to be back at Goss,” Elliot said. “Beaver fans are the best in the country and will go to battle with you.”

During his recovery, Willy said he couldn’t wait to get back on the field again and prove that his injury wasn’t going to hold him back from being the player he knew he was.

“There were people out there that doubted I would play baseball again, let alone for Oregon State at the D-1 level and that was always eating at me and kind of bugging me,” Willy said. “So to finally get back out there and do what people said I wasn’t going to be able to do was really fulfilling.”

According to Roy, after seeing his son play again for the first time, he felt relieved, not because he didn’t believe he would be able to get back on the field but because he knew that’s where Elliot wanted to be.

Interim Head Coach, Pat Bailey, said he felt what happened to Willy was tragic and is glad to have him back on the field.

“For him to come out and even play baseball again I give him credit. He is a tough minded guy, a hard worker and just a great young man,” Bailey said.

According to Theresa, about 24 hours after the incident, she got a call from Jeremy Ainsworth, the assistant trainer for the baseball team, assuring that her son would be back on the field.

“He said we can handle this, Elliot is going to be in good hands and that actually made me feel really good,” Theresa said.

Roy said the he and the rest of the family were grateful for the trust and support from the coaches.

“Props to the coaching staff for not making any assumptions of what impact, if any, it would have on his abilities,” Roy said. “They put everyone on a level field and that is much appreciated by the whole family.”