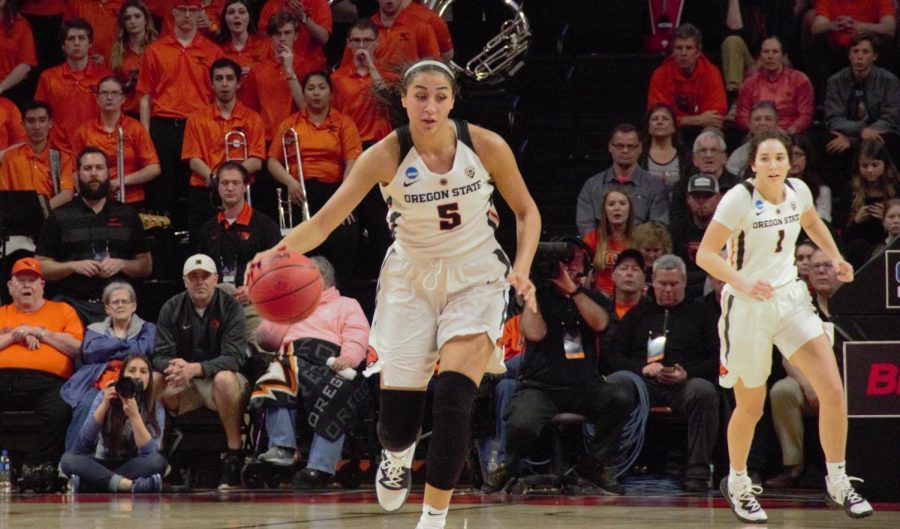 OSU sophomore forward Taya Corosdale dribbles the ball down court against Boise State on Saturday, March 23. Corosdale scored 12 points against the Gonzaga Bulldogs on Monday evening, helping the Beavers advance to their fourth Sweet-16 appearance in a row.

Oregon State Women’s Basketball took a 76-70 victory over the No. 5 Gonzaga Bulldogs in the NCAA Division-I Tournament on Monday night at Gill Coliseum, earning a trip to the Sweet-16.

The Beavers, who are fourth-seeded in the tournament, were suffocated by the Bulldogs for a majority of the game, unable to gain a lead larger than three points until the fourth quarter.

OSU junior guard Mikalya Pivec hogged the stats sheet in the game, putting up 19 points, 11 rebounds and six assists, all categories which she led the team in.

Pivec joined four other Beavers in the double-digit scoring column, including Destiny Slocum, Taya Corosdale, Madison Washington and Aleah Goodman, all of whom scored 12 points individually.

Putting up 20 points, GU’s Zykera Rice helped her team lead in the game for over 25 minutes compared to OSU’s nine.The Bulldogs, who once led by as much as six points in the third quarter however, suffered largely from having six players enter foul trouble.

Gonzaga lost their lead at the six-minute mark of the fourth quarter and were unable to regain the deficit despite multiple 3-pointers late in the game. The Beavers ran away with the win, 76-70.

Oregon State will travel the Albany, New York, to take on the No. 1 Louisville Cardinals in the Sweet-16 portion of the NCAA Women’s Basketball Tournament on Friday, March 29.