Heritage Trees connect present to past 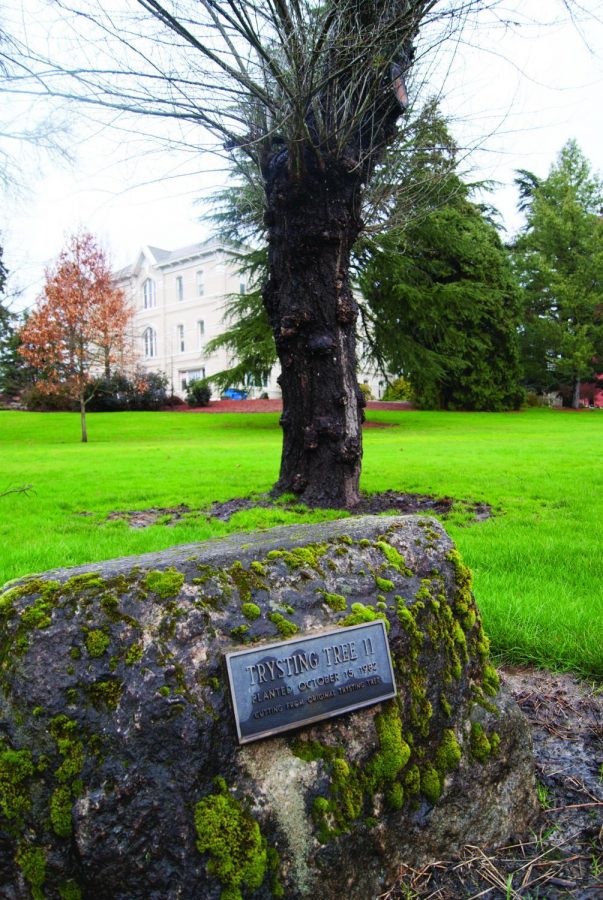 At Oregon State University, many of the trees students pass by each day, whether covered in snow, blooming or bare, have a unique story to tell about the history of the university, says Staff Archivist Karl McCreary.

With Heritage Tree programs at both the local and state level, these stories are being uncovered. The Oregon Heritage Tree Committee works to preserve trees that they have found to be associated with a historical place, person, or event.

Paul Ries, an OSU instructor who directs the graduate program in urban forestry, was a founding member of the committee in 1995 and remained a member for around 20 years. According to Ries, the committee was founded because Oregon did not have a state program to recognize trees for their historical value.

“In fact, there was really no state heritage tree program in any of the states,” Ries said.

Currently, this program recognizes over 50 heritage trees in Oregon. One is on OSU’s campus – the Trysting Tree, a gray poplar located near Benton Hall.

The Trysting Tree has been celebrated as an icon of OSU dating back to when it was first planted. According to McCreary, the original tree was likely planted between 1880 and 1885 by a professor named George Coote.

Back then, according to McCreary, mixing between genders was strictly regulated. The tree was a place where students could meet up and briefly escape from restrictive rules.

McCreary believes that trees like the Trysting Tree give us insight into aspects of life in the past.

“They point to a much deeper culture. They represented something really important in their time and we might not understand just by looking today, but for students a hundred years ago that tree was a very special thing,” McCreary said.

According to McCreary, by the 1890s the tree appeared on a commencement program, showing how quickly it became an icon of the school. In 1913, OSU’s alma mater song “Carry Me Back” was written with mention of the Trysting Tree in its lyrics.

The original tree was cut down in 1986 due to disease. According to McCreary, it was cut down during a sporting event, presumably to attract as little attention as possible. However, a clone of the Trysting Tree was planted from cuttings taken by the OSU Department of Horticulture.

According to Ries, because of the famous nature of the second-generation Trysting Tree, it was accepted easily into the program.

With other trees, the process of proving its historical importance is usually not as easy.

“Often times we have to go back through historical records, or libraries to come up with the documentation that proves a tree’s history,” Ries said.

A heritage tree designation does not always protect trees from being cut down. However, it can lead to communities valuing trees more.

“It carries some weight in terms of the court of public opinion,” Ries said.

Benton County also has its own heritage tree program that lists different historical trees on OSU’s campus. Among these is the “Moon Tree” outside of Peavy Hall, grown from seeds taken into orbit around the moon in a 1971 Apollo 14 mission.

According to Ries, heritage trees connect us to Oregon’s history.

“These are trees that tie us to our historical roots. It’s a way to recognize these trees which are silent witnesses to the history of Oregon,” Ries said.