Stewart: It’s time to break up with Valentine’s Day 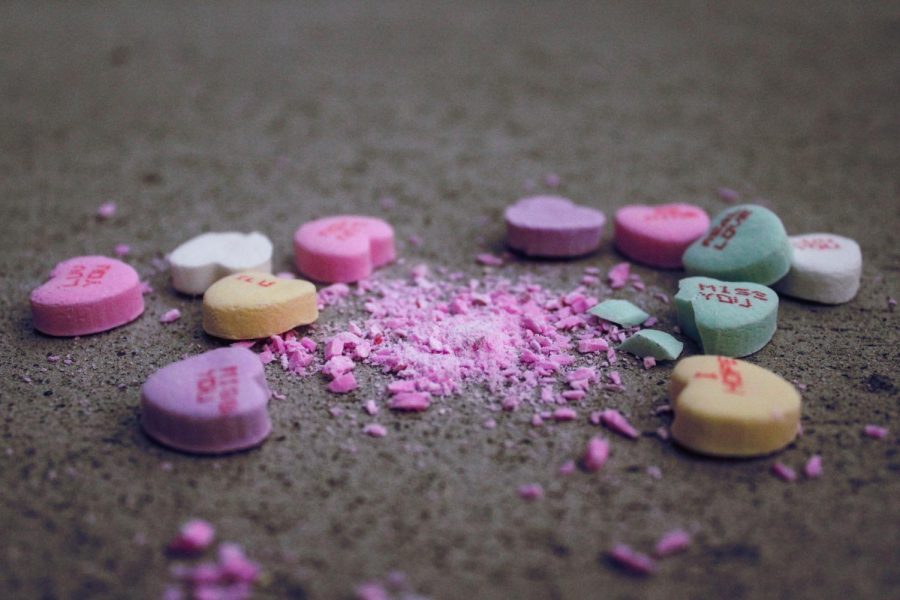 Let me break it down for you: it’s overly commercialized and expensive, it perpetuates harmful heteronormative gender stereotypes and focuses on wildly unhealthy relationship expectations.

Over the course of centuries, what began as a raucous Roman celebration of fertility that involved slapping women to make them more fertile–according to NPR–became a minor Christian holiday for honoring martyred saints and wiping out pagan rituals while still maintaining its ties to fertility. As more time passed, Valentine’s Day was further romanticized by Shakespeare and handmade paper cards.

When industry took over, factories began pumping out mass-produced cards, culminating in Kansas City, Missouri in 1913, when Hallmark began manufacturing valentines. Today, the holiday persists, manifesting itself in gaudy–and pricy–department store displays, obnoxious themed episodes of our favorite TV shows and the relatively popular alternative for folks who aren’t paired off, Singles Awareness Day (aka SAD).

Already we’re off to a bad start. Fertility slaps? Martyrdom? Industry seizure? A very SAD alternative? None of these strike me as healthy basis for a day meant to enshrine romance and love.

Jason Stornelli, assistant professor in the College of Business, said that despite the many prospective commercial pitfalls of Valentine’s Day, he believes that one’s attitude going in can make all the difference.

“I think Valentine’s Day is what you make of it. It can be a chance to spend money on things few people really need, or it can be an opportunity to spend some quality time with people you care about. I prefer to do the latter,” Stornelli said in an email.

Valentine’s Day has become so culturally pervasive that it’s even become the subject of a wide array of jokes. The Onion, a popular satire website known for being brutally honest, has taken on Valentine’s Day with some of their signature humor.

In a 2014 piece titled “Nation’s Girlfriends Admit Absolutely Everything Riding on Valentine’s Day,” The Onion described one of the most aggravating stereotypes associated with this date: unhealthy levels of emphasis placed on a single, arbitrary date. Throughout the article, the writers at The Onion take jabs at the impossibly high expectations that “the nation’s girlfriends,” hold for this day “despite anything they may have said or implied in the past.”

However accurate or inaccurate (or hilarious) this image is, it is infuriating and gross because it is grounded in gender expectations. Women are expected to be the more sentimental in relationships, and this idea that none of the gestures and care demonstrated outside of this single date really matter is a portrayal of women as irrational, moody and unreasonable. And that’s just within heterosexual couples. Because mainstream cultural depictions of romance often fail to represent LGBTQ+ folks and couples, entire groups of people can feel excluded by the holiday and its expectations.

Jim Gouveia, Staff Counselor and Suicide Risk Reduction Coordinator at Counseling and Psychological Services (CAPS), had some more biting commentary when asked how he feels about the holiday.

“Valentine’s day is a Hallmark holiday created to increase consumption and purchasing for many different industries, it has lost all meaning in regards to love and relationship and the pressure to consume is huge from flowers, to candy, to diamonds,” Gouveia said in an email.

Gouveia went on to explain that social pressures to be part of a romantic pairing take a huge toll on students year-round, but Valentine’s Day just makes it worse.

“Relationships or the lack thereof is the third reported issues for students who come into CAPS for services,” Gouveia said in an email. “We all want to give and receive love and to have a sense of connection. Valentine’s Day the way it is commercialized just increases the sense of not being loveable or feeling connected, it limits [our] ability to be a whole human being with strong connections outside of romance.”

Perhaps the single most frustrating aspect of this Hallmark holiday is how absolutely inescapable it is. Everywhere you go this time of year, bare-bottomed cherubs armed with arrows of love stare at you through their peppy, beady little eyes and coworkers accost you with personal inquiries. Even I, like many of you, have relatively festive plans.

And some small part of me will be rolling my eyes the entire time.