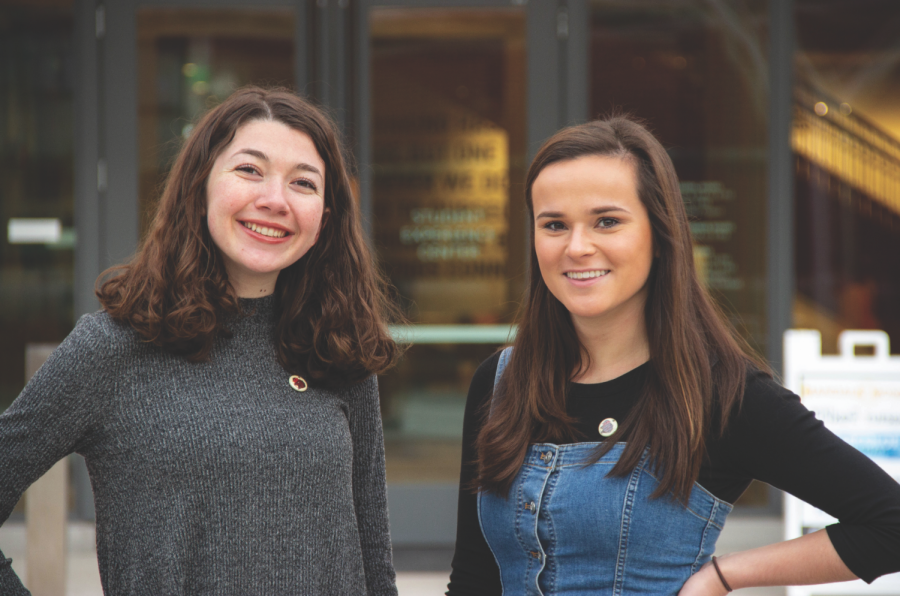 At 10 p.m. on the night of the Associated Students of Oregon State University election results release, Rachel Josephson and Kylie Boenisch excused themselves from their friends and waited in anticipation in a separate room.

It would be another half hour of waiting before they received the call from the ASOSU Elections Committee telling them that Josephson had been elected president, and Boenisch vice president.

“Kylie is screaming, ‘are they serious?’ and I’m trying to accept the position,” Josephson recalled.

Boenisch could hardly believe it.

“I thought they were kidding,” Boenisch said.

On the front porch of their friend’s house, Josephson and Boenisch celebrated with friends and made calls to their loved ones in the rain and cold. Boenisch called her parents, who live in North Carolina where the time was around 2 a.m.

Now, in the time leading up to their official inauguration as ASOSU president and vice president, Josephson and Boenisch say their most important task will be to hire the members of their cabinet. They plan to start as soon as next week.

“A lot of great people turn out for those roles, so it’ll be great to talk to everyone,” Josephson said.

ASOSU Faculty Advisor Drew Desilet works with the elects, assisting them in the hiring process. According to Desilet, the selection of cabinet members will help to begin making campaign platforms a reality.

“The primary job of the president and vice president elect is to turn their campaign platform into manageable goals with a strategy to be implemented, through the hiring of a staff,” Desilet said via email.

According to Desilet, the existing administration can be a valuable resource for elects.

“Working with the current student leaders always aids in a smooth transition, the extent to which they choose to work with them however is up to the newly elected,” Desilet said via email.

The pair has also chosen to work closely with Justin Bennett and Aiden Tariku, the current ASOSU president and vice president. According to Josephson, continuity between different administrations is an important goal to work toward.

“What’s really important is to pick up right where Justin and Aiden are leaving off,” Josephson said. “We don’t want to lose any of the ground that they gained. If they have something they’re close to completing, we want to be able to complete it.”

Aligning with their campaign goal of greater ASOSU visibility to students, Josephson and Boenisch plan to continue utilizing social media as a way to reach more students.

They hope to start a YouTube channel soon, showing viewers the different aspects of their positions leading up to and after inauguration. According to Josephson, they have successfully connected to students in the past by using Instagram surveys and reading direct messages on Instagram.

“It’s immediate outreach, instead of having to walk into an office. Modern problems require modern solutions. Why not use our most effective outreach tool?” Josephson said.

According to Boenisch, a question on the election ballot asking what ASOSU could do to better serve students received over 20 pages of answers.

“We’re going to take the time and read through all of those and see what students have to say,” Boenisch said.

Boenisch described being elected as “the greatest honor.”

For Josephson, it is difficult to believe the campaign has really ended.

For Josephson, a current ASOSU representative, and Boenisch, an ASOSU senator, Friday night’s election results marked the end of a campaign process that began nearly a year ago. Although campaigning officially began on February 4, the pair, who ran under the campaign slogan OSforU, had been planning since last spring break.

According to Josephson, some of the many campaigning tasks included asking for endorsements, making visits, presenting to different clubs and especially keeping up with social media accounts.

“It’s so time intensive, it’s unbelievable. It’s always on your mind,” Josephson said. “Whenever you’re on your phone, you’re checking Instagram, making sure no one’s messaged you on Facebook. You just have to make so many connections.”

Every Monday, Boenisch and Josephson would quite literally run between multiple different Greek houses to give speeches to fraternities and sororities during their chapter nights.

Both agreed their friends were essential to winning the campaign.

“We had amazing friends who would pick us up and drive us to houses if they were too far,” Boenisch said.

Boenisch and Josephson themselves have been friends since freshman year, when they were suitemates in West Hall. They are still roommates.

“We’re always within 10 feet of each other,” Josephson said.

According to Boenisch, it was a challenge at times to keep up with school during campaigning, especially when midterms intersected with events such as the ASOSU presidential debate.

“It was hard to balance at times. I had an exam at 8 a.m., and then class until 2 p.m., then we had to prepare for the debate,” Boenisch said. “It’s important to still give an adequate amount of time to school while also campaigning.”

Boenisch acknowledges, however, that there is still plenty of hard work ahead.