No. 12 Oregon State Gymnastics take down No. 14 California in Dam Cancer meet 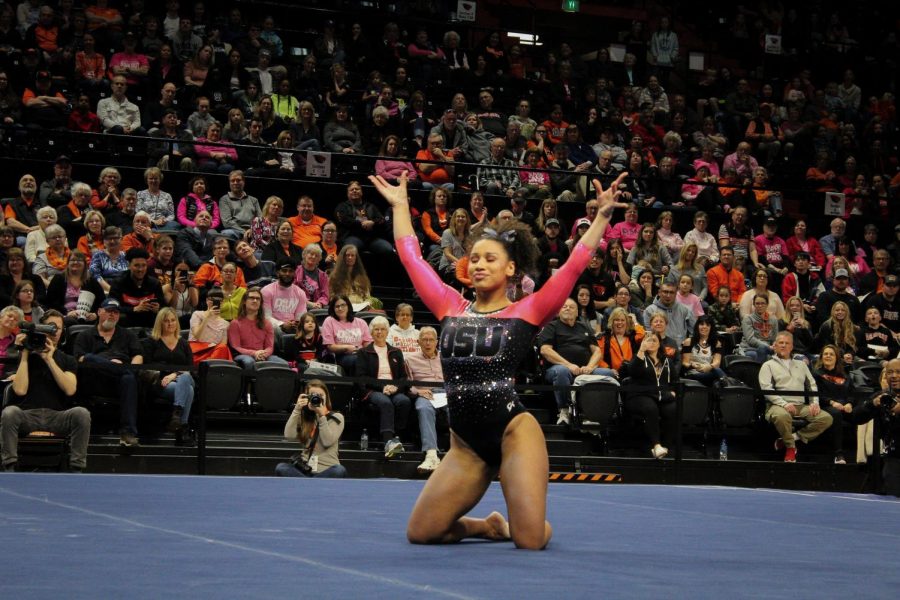 OSU junior all-arounder Isis Lowery performs her floor routine as the Beavers edge towards earning a 196.950-196.150 win over the California Golden Bears. Lowery earned a 9.875 on her routine, the second-highest mark for the Beavers from the floor in the meet.

Correction: The score from OSU’s Kaitlyn Yanish on her floor routine was previously written incorrectly in the subhead and has now been corrected to 9.950.

Oregon State Gymnastics earned their first home win of the season this Sunday afternoon against the No. 14 California Golden Bears at Gill Coliseum with a final score of 196.950-196.150.

The Beavers, who are currently ranked No. 12 in the NCAA, are now 3-2 in the Pac-12 with their other two wins coming from away meets against No. 11 Washington and No. 25 Arizona.

In the meet, things started off weird when officials noticed flash photography in the crowd while OSU senior McKenna Singley was performing her vault routine. Singley, who originally scored a 9.750, was given another go at the vault due to the incident in which she tallied a 9.800 on the second attempt. Singly also scored a 9.800 on the floor and a 9.725 on the balance beam.

Freshman Madi Dagen had the greatest overall performance for the Beavers, scoring a combined 29.575 on the vault, beam and floor. According to Dagen, she felt inspired to perform for her family and former gymnastics coach who were in attendance at the meet.

“I had a lot of fun. College gymnastics is everything I’ve imagined it to be, so I’m visually happy,” Dagen said. “I felt calm and ready, and I just went out there and gave it my all.”

Later in the meet, California suffered a devastating loss when fifth-year all-arounder Toni-Ann Williams when down with an apparent leg injury during her floor routine. Williams, who scored a 9.875 earlier in the meet on the vault, was granted a 9.100 on the floor for her efforts.

“Our hearts went out to Toni,” OSU Head Coach Tanya Chaplin said. “You always hate to see that because she’s a beautiful gymnast and those things unfortunately happen in sports.”

After the final rotation of the meet, OSU sophomore Kaitlyn Yanish scored the highest individual tally for both teams when she added a 9.950 to the Beavers’ final mark.

The Beavers will be traveling to Tempe, Arizona next Friday, Feb. 22, to take on the Sun Devils at 6 p.m.