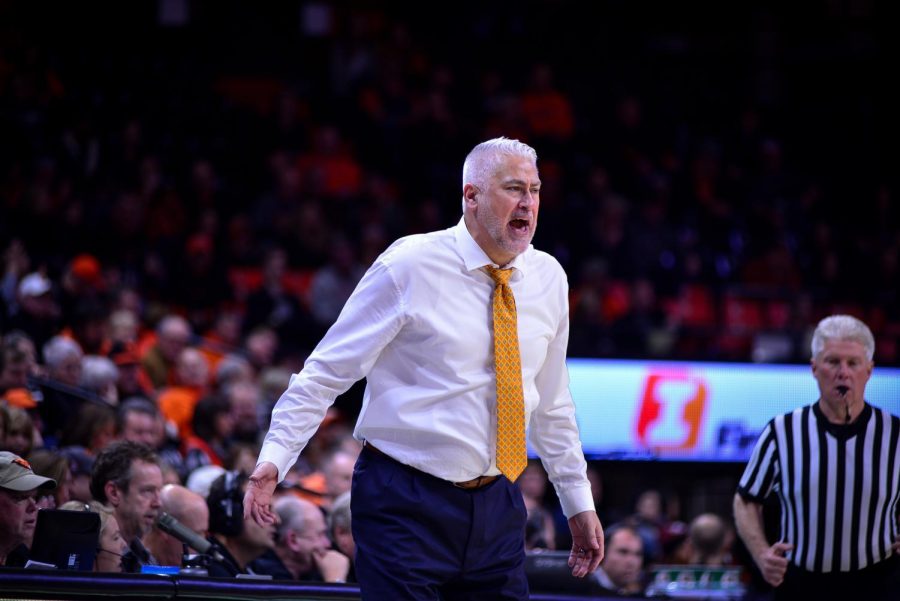 OSU Men's Basketball Head Coach Wayne Tinkle yells out to his players on the court during their game against Stanford. The Beavers were unable to secure a win against the Cardinal, taking the loss with a final score of 83-60.

Oregon State Men’s Basketball lost to Stanford at Gill Coliseum on Thursday night with a final score of 83-60.

This loss takes the Beavers overall record to 14-8 and puts their Pac-12 record at 6-4.

During the first half of the game the Beavers were down 48-35. OSU Junior Tres Tinkle, a forward from Hellgate High School, put up 16 points in the game, leading the team in scoring. Senior guard Stephen Thompson Jr. followed second with the 15 points scored in the game.

“They got everything around the hoop. They didn’t really work with their corners. They had a lot of layups around the rim and we gave them those,” Tinkle said.

Tinkle, who has been averaging 20.8 points per game, fell short of his the benchmark in the match against Stanford. According to Tinkle, he knew the game was going to be  tough, but was unable to perform as intended alongside his team.

“Every time we play Stanford it’s a game of toughness, and again, they kicked our butts and we played soft,” Tinkle said.

During the second half of the game, the Beaver’s began to pick up their momentum. However, OSU was only able to score a total of 25 points after halftime, not enough to match Stanford’s 35.

Thompson Jr. was just under his season average of 15.8 points scored per game.

“There were shots that we normally make around the basket that didn’t go in. That’s something we can take of and manage before our next game,” Thompson Jr. said.

OSU Head Coach Wayne Tinkle was surprised by the teams performance and the outcome of the game.

“The last thing we said in the locker room in Utah was ‘we have to stay hungry,’ and we said it again before the game tonight,” Wayne Tinkle said. “We need to get back to where we’re playing Beaver Basketball, defending challenging shots, rebounding, executing and making plays.”

The Beaver’s will return to Gill this Saturday, Feb. 9 at 2:30 p.m. to take on the California Golden Bears.