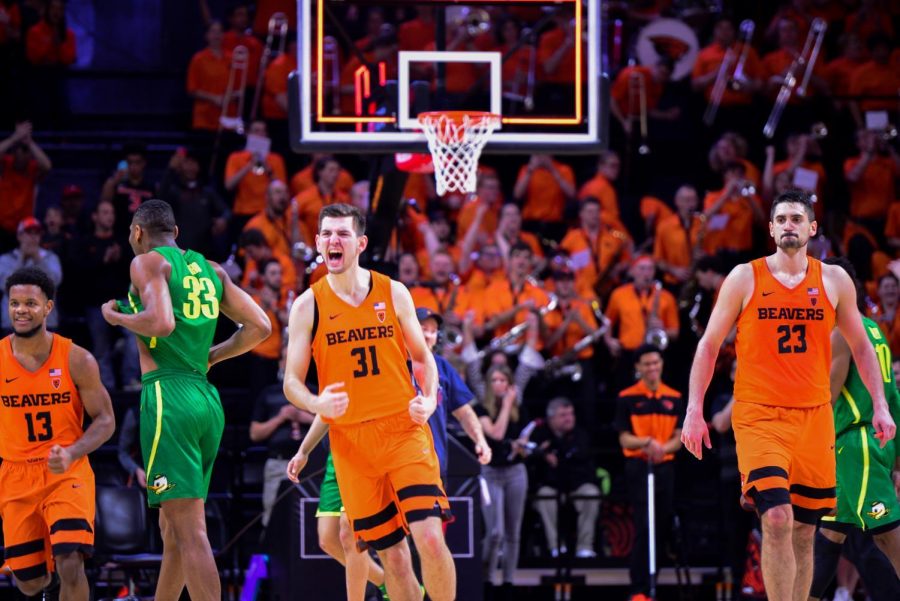 OSU walk-on sophomore forward Eli Glenzel (Middle) runs towards his teammates in celebration of the Beavers' 72-57 victory over the Oregon Ducks on Feb. 16. Glenzel only had a couple seconds of playing time in the game, but earned his first collegiate rebound in the process.

After years of trying to find his place at Oregon State, sophomore forward Eli Glenzel secured his first collegiate rebound as time expired in the 2019 Civil War game. Gill Coliseum erupted into cheers as the Beavers swept the Ducks for the first time in over a decade, but it was that last rebound that brought his father to tears.

Glenzel’s father, Matt Glenzel, said that his son made the last 10 seconds of playing time he received worth it.

“That look when he got the rebound in the game at OSU, I’ve never seen that in my son. I was in tears. That was amazing. How can you not be proud of that?” Matt said.”It’s another stepping stone to that confidence he’s been gaining since college. Every time I see him he’s a different guy. It’s a great thing to see. I couldn’t ask for anymore.”

Although his father vividly recollected the moment, Glenzel, the walk-on from Eugene, Ore., was unable to recall those last 10 seconds.

“I went in and I blacked out. It was so surreal,” Glenzel said. “I’m just a kid from Eugene. So to be playing against my hometown team, in the Civil War, in a victory, it was surreal.”

But that moment, which Glenzel’s father called amazing, may have never happened if Glenzel decided not to join the team as a walk-on.

“To end the game with the ball in my hands in that situation, with my parents and my grandparents watching, I couldn’t ask for anything more than that,” Glenzel said.

In December of 2018, the Oregon State Men’s Basketball team lost two players from their roster and were suffering from multiple injuries, causing a need for additions to the team.

According to OSU Men’s Basketball Head Coach Wayne Tinkle, the women’s basketball staff recommended him to look at Glenzel since he was a member of the the women’s practice squad.

According to Tinkle, Glenzel was excited to join the men’s team, but he was thrown straight into the fire.

“He learned quickly that he’s going to be coached like everyone else from the staff,” Tinkle said.

Glenzel was first skeptical of joining the men’s team since the coaching staff couldn’t guarantee any playing time.

“I was like ‘fine, I’ll do it. I’ll be a walk on. It will be a good experience.’ I learned quickly that I am a little fish in a big pond. I’m just making the most out of it,” Glenzel said. ”I would have never thought two years ago that I’d be here playing D-1 basketball for Oregon State.”

Despite his skepticism, Glenzel accepted the offer and became an official member of Oregon State Men’s Basketball. Upon hearing the news of Glenzel’s walk-on offer, Matt said he was ecstatic that his son’s hard work had paid off.

“I thought that it would lead into other opportunities in the future. Getting involved with any program, D-1, D-2, D-3, any level, people are going to notice your hard work,” Matt said.

Through the duration of the season, Glenzel would suit up for games, but was not given any playing time. However, On Feb. 16, Glenzel got his first opportunity to enter the game against his hometown Ducks. Tinkle said it was neat to be able to put Glenzel in against Oregon.

“That’s what we’re all about, giving people opportunities. Those who earn opportunities, that’s what they get. It’s pretty cool for he and his family. It’s easy to do stuff like that when you’ve got guys on your team that you really love,” Tinkle said.

Rueck was very happy for Glenzel and said he deserved the opportunity.

“I think if Eli played 40 minutes, he’d average like 140 rebounds a game, so Wayne might want to consider throwing him in there a little bit sooner,” Rueck said.

Now a Division-I basketball player, Glenzel didn’t take interest into sports until entering South Eugene High School. According to Glenzel’s father, his son was a late bloomer when it came to sports.

“When he was a little kid, we tried to get him into the YMCA type of basketball, he just wasn’t really into the sport thing as a kid,” Matt said. “With basketball, most kids start early, he started late.”

For Glenzel, who played four sports in his high school career, his main focus wasn’t on the court, but rather in the high jump pit.

“In high school, I wasn’t necessarily the best basketball player,” Glenzel said “I was looking back on my stats and I had 12 points my entire time on varsity. I was track all the way.”

Despite his passion for high jump, Glenzel suffered from severe shin splints during his senior year, causing him to become unsure if he would be able to compete at the collegiate level.

After graduating from SEHS, Glenzel decided to move on from athletics and focus on his education. In 2016, he enrolled at Oregon State University, intending on earning a degree in business administration. It was that year when Glenzel joined the OSU Men’s Rowing team, but quit shortly after.

Stepping away from rowing, Glenzel was determined to be active on campus in whatever way he could. According to Glenzel, his father has always pushed him to stay busy.

“Coming into college, the number one thing that my dad told me to do was to be involved. That’s the biggest piece of advice that I’ve taken throughout my college career,” Glenzel said.

Although Glenzel is unsure of his status with Oregon State Basketball in the future, having the opportunity to play against his hometown team was a surreal moment.

“I really don’t know what the future holds. So I’m not going to say anything about that,” Glenzel said. “I don’t know if this is a guaranteed thing for next year or if this is the only year they want me here.”

Glenzel has ambitions of one day earning his masters degree, as well as possibly owning his own business. That is, if he doesn’t get into coaching, which he said is an option he would like to keep open.

“I love basketball and I love the coaching aspect of it. I love our women’s team and I love the program that Scott Rueck has at Oregon State. I’ve told him ‘if you need anybody i’m here to help.’ So, coaching is definitely an option after graduation.”