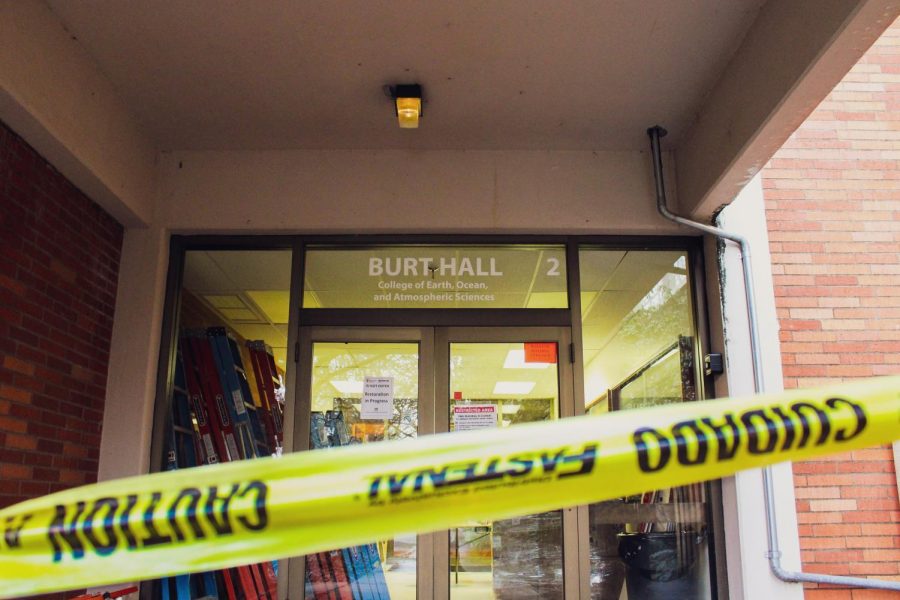 The College of Earth, Ocean, and Atmospheric Science is still reeling from the damage caused by a fire in Burt Hall that took place at the end of fall term, and subsequent efforts to evaluate and repair the damaged portion of the building reach far and wide across the university.

The fire started in a scientific microwave, in a laboratory on the second floor of Burt 2, on Friday, Nov. 30. The “2” indicates the specific section of Burt Hall, of which there are four.

According to Jim Patton, fire prevention officer at Oregon State University, Burt Hall,as well as a number of other older buildings around campus, are not equipped with fire sprinklers, which could have helped mitigate the damage done by the fire. Fire codes and other safety regulations in place at the time of these buildings’ construction did not mandate the inclusion of fire sprinklers and they have not since been updated. Current regulations allow these buildings to be grandfathered in because of these differences, making the buildings technically in compliance with the current rules.

“Sprinklers are very valuable, but they are not an exclusive measure that contributes to a building’s safety,” Clark said in an email.“Maintenance of a building and the safe storage, maintenance and use of flammable materials, including paper supplies or fabric, as well as the care and use of electronic equipment are important safety measures. So is proper emergency training of staff and students who work in and frequent campus. Safety and sprinklers are not an either or.”

According to Patton, the fire was thought to be extinguished as firefighters arrived on the scene in a single engine. However, thick, black smoke rising from the building’s chemical hood stacks and the chemical nature of the fire’s origin indicated that cause for continued concern. As the severity of the fire became apparent, additional fire engines arrived on the scene for a total of three or four.

Ultimately, the fire was contained to the lab. Patton said that the microwave from which the fire originated was “over packed,” by the firefighters, meaning that it was packed into a sealed, secured container so that it could burn out safely.

The rest of the lab was, according to Patton, effectively incinerated after it reached “flashover temperature,” meaning that the room’s temperature rose to approximately 1,200-1,400 degrees Fahrenheit, causing the entire lab’s contents to rise to their temperature of ignition and subsequently burn.

There were no fire-related injuries. According to Patton, one firefighter endured a minor wrist injury after working to help contain the fire.

However, the damage done to Burt Hall extends far beyond the lab in which the fire originated. The fire also resulted in water and smoke damage to different parts of the building.

According to Jason Balderston, Facilities and Operations Manager for CEOAS, the water from the firefighters’ hoses and water from pipes, both domestic and lab-specific deionized water lines, ruptured during the fire and flooded the entire second floor. The water then seeped down to and flooded the first floor, then seeped down to and flooded the basement.The movement and accumulation of the water has also resulted in mold growth in many of the building’s wall cavities. Additionally, the smoke from the fire penetrated the third floor of the building, causing damage to scientific equipment and a great deal of soot accumulation.

According to Balderston, Burt 2 is CEOAS’ primary analytical lab space and was home to a great deal of scientific research and equipment. The third floor in particular houses a great deal of highly sensitive equipment, including approximately 11 mass spectrometers, machines used to analyze the makeup of a material by separating molecules and isotopes.

Balderston said that he is frequently met with surprise when describing the lasting effects of the fire.

“That’s happening all across campus and out in the community: it was a fire in a laboratory and that was the end of it,” Balderston said.“People don’t realize the extent of the damage and the effect that that’s having on our research enterprise in every part of the college. Our team is still spending a bulk of our day-to-day time contending with the aftermath. It’s still a very challenging and dynamic situation over here.”

During this time of uncertainty for CEOAS,other groups from across the university have stepped in to help.

Libby Ramirez, University Architect and Director of Capital Resources, and her colleagues Christina McKnight, interim chief risk officer and Dustin Sievers, Project Manager, are part of a team working to evaluate the damage done to the building, make plans to repair the building and determine how insurance will contribute to the resultant expenses.

“We have assembled a team that includes people from the College of Earth, Ocean and Atmospheric Sciences, OSU’s offices of Capital Planning & Development, Enterprise Risk Services, Environmental Health & Safety and Procurement & Contracts to assess and serve the immediate needs as it regards the teaching and research that would otherwise occur in Burt Hall before this incident,” Ramirez said in an email. “This team also is addressing remediation of building damage and long-term planning associated with repairs.”

Clark also indicated that, in coming years, the university plans to update certain buildings on campus to include fire sprinklers and other important features.

“Meanwhile, as part of its 10-year capital forecast and also long-term university plans to deal with deferred maintenance, OSU is creating plans to update many buildings for seismic reinforcement, other safety improvements, including some new fire sprinklers and issues such as accessibility,” Clark said in an email.