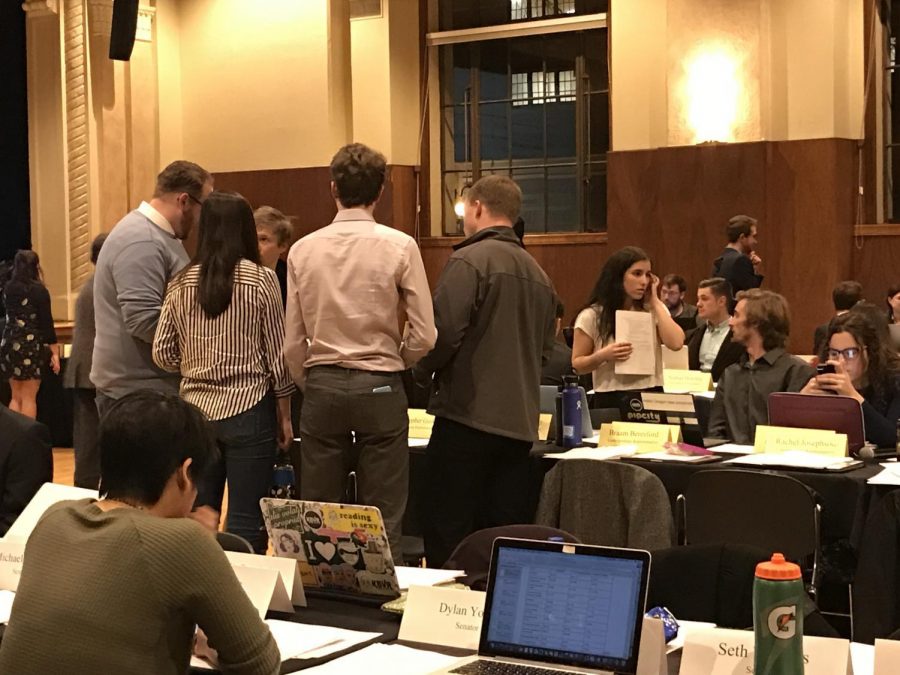 Members of the Student Fee Committee discuss budget proposals during a brief recess.

After contentious debate regarding Oregon State University Athletics’ student ticket fee at the Associated Students of OSU joint session on Jan. 16, Athletics’ proposed fee of $41 per term was rejected and sent to mediation, where it will be further reviewed by the Student Fee Committee today.

Several arguments were presented by members of Congress opposing the fee, especially taking issue with Athletics’ use of student fees to garner free sporting event tickets for all students, whether they use these tickets or not: some members said they have friends who never attend games and thus never make use of the tickets they can get for free, some believe funds could best be allocated to another unit. One member likened the vote to one against sports and for the rest of the world.

Certainly, the debate and deliberation the members go through to allocate funds and resources among groups on campus is appreciated. However, ASOSU, as representatives of their constituents—the student body as a whole—must consider the unifying nature of athletics and its vast popularity across campus.

Not only that, but the current proposed student ticket fee is actually less per student now than it was ten years ago, at $42.18 in 2009 vs. the proposed $41 today, juxtaposing other units on campus who have seen steady increases in funding.

“We still feel as though it’s a very affordable option and we’re very cognizant of trying to ask students for as little support as possible,” Deputy Athletic Director for External Operations, Zack Lassiter said.

Ultimately, if ASOSU rejects the proposed budget, students will lose one of the three pillars of Athletics’ current model: getting the best seats, student ticket accessibility or ticket affordability.

Alex Luther, president of the BeaverDam Executive Board and Athletics Liaison on the ASOSU Student Fee Committee, also stated that other Pac-12 schools have higher yearly student ticket fees, in addition to passes or tickets that must be purchased by students, particularly for high-profile sports like football and basketball. By eliminating the current ticket model, OSU students may find themselves in a similar situation, faced to pay for each individual athletic event or for additional passes to attend higher-profile sports.

One of the failures of ASOSU members who are opposed of the budget is viewing the student ticket fee from the perspective of a “pay-per-use” model. This is simply not the appropriate way to view student fees from any unit across campus; fees are paid in order to support the programs that are valuable to the students, community and experience of being at Oregon State. Certainly, one can’t justify defunding programs like SafeRide or Dixon based on the notion that the entirety of the student population fails utilizes their resources, and the same should be said for attending athletic events.

It is likely that athletics is one of the most utilized services among the units in the student fee budget. According to Student Fee Committee minutes, there have been over 23,000 unique student IDs who have claimed a ticket since fall 2016, and over 11,500 since fall 2018.

“In today’s climate, it’s often hard to find unifying moments and events where we find that level of community and camaraderie,” Luther said via email. “The student ticketing program, funded by student fees, is structured specifically so moments like these continue to be possible.”

At OSU, we are fortunate to have this low-cost fee—one which is affordable and accessible to the general student population, one which sets us apart from the other institutions at the Pac-12 level. Athletics fosters diversity, unity and community in a way which no other event or group can. By supporting and approving athletics’ proposed student ticket fee, ASOSU would ultimately reflect the views of a vast majority of the student population rather than the select few within the governing body who seemingly disapprove personally of athletics and sports as a whole.