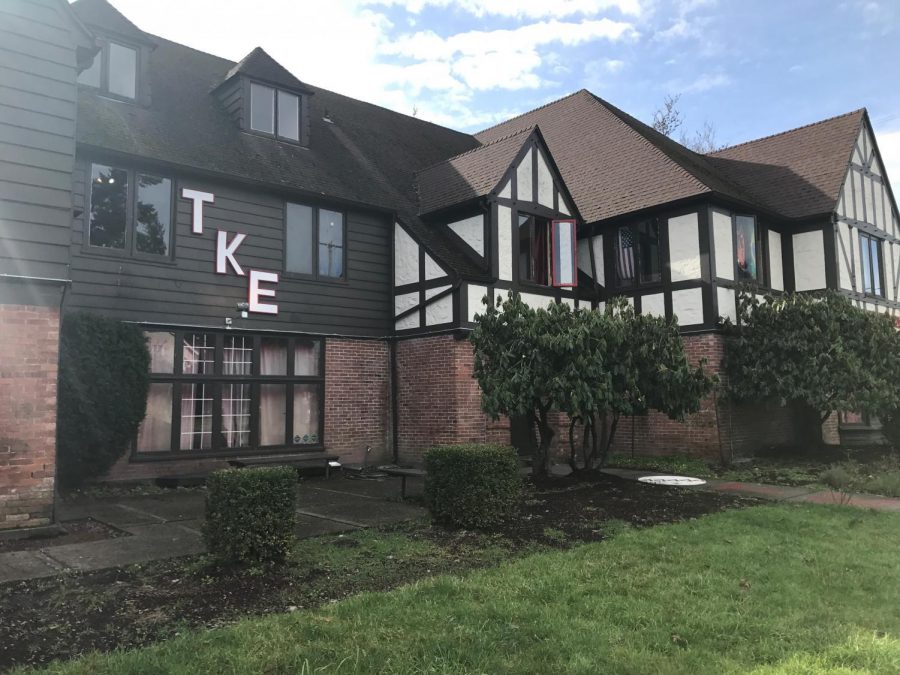 Tau Kappa Epslion is one of the six fraternities within the Affiliated Housing Program.

Tau Kappa Epsilon, an Oregon State University fraternity, is implementing extra security measures to avoid further surprises like the notification that squatters had lived in and vandalized their house over winter break.

Over the break, the Corvallis Gazette reported that six individuals had allegedly squatted in and vandalized the Tau Kappa Epsilon and Chi Phi fraternity houses, both of which were vacant at the time. As a result, Tau Kappa Epsilon will now be paying more attention to security, including boarding up all accessible windows.

Both fraternity chapters are inactive during the 2018-19 school year, and therefore are currently lacking residents.

OSU graduate and alumnus of Tau Kappa Epsilon, Erik Jaqua, is currently the chairman of the housing corporation that owns the TKE house in Corvallis. According to Jaqua, winter break is one of the most concerning times for managing the property. Many students leave town, including those that would normally be residing in the facilities.

“I can’t speak for other fraternities, but we had arranged for a regularly scheduled walk-through to happen during the break,” Jaqua said via email. “We were not expecting someone to vandalize property in order to break-in and enter the premise, though.”

As a result of the squatting incidents, security measures are now being emphasized at the TKE house. Accessible windows have been boarded to prevent another incident, yet Jaqua acknowledges that these measures are not an option for regularly-operating fraternities.

“I imagine it’d take a diligent, ongoing effort to ensure common sense practices (locked doors/windows, walk-throughs, tenants, etc.) are in place to deter where possible,” Jaqua said via email. “In case the deterrence doesn’t work, it’s good to have a plan and be ready to deal with adverse circumstances in case something goes wrong.”

Jonathan Weinberg, a third-year student and president of the Interfraternity Council, explains that the houses are property of third-parties which typically consist of chapter alumni. The houses are not owned by the university.

“I would predict that the damages will be handled by the respective owners of the property,” Weinberg said via email. “We are sorry for the damages and hope that the owners can continue to work with the City of Corvallis to prevent this in the future.”

Leslie Schacht Drey, the assistant dean of Students & Director of the Center for Fraternity and Sorority Life, also emphasized that the fraternity houses are not owned or operated by Oregon State University, but was upset to hear the news of the squatters nevertheless.

“We are disappointed that anyone, not approved to be in any vacant or occupied private house, would gain access to that property by trespassing and would use the property without permission and damage its contents or facilities,” Schacht Drey said via email.

Since each fraternity house is privately owned and operated, modes of security are maintained by the third-party organizations that own the property. However, Schacht Drey wants to help make sure owners to educate themselves on proper security measures for the properties.

“We will remind all fraternity and sorority organizations affiliated with OSU, and that operate in privately owned houses, to contact Corvallis Police and learn more about recommended property safety procedures,” Schacht Drey said via email.

In addition, the Interfraternity Council will continue to work to provide advice and assistance to fraternity house owners regarding security and safety measures.

“If a chapter house remains vacant for an extended amount of time, the Interfraternity Council will continue to advise property owners to seek enhanced security and work with relevant city services to ensure the safety of their respective property,” Weinberg said via email.