Oregon State Gymnastics falls to No. 4 Utah in home opener 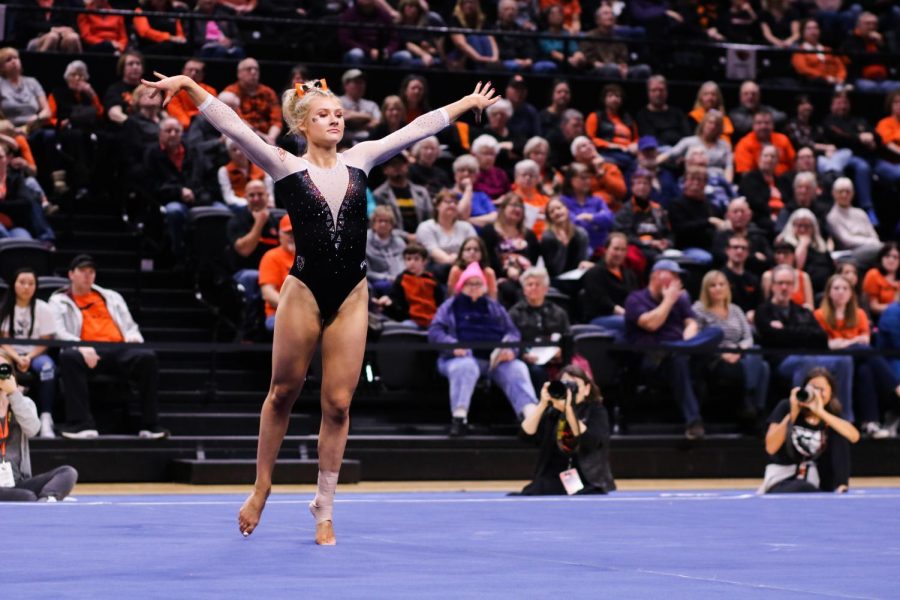 OSU sophomore Savanna Force executes her floor performance in front of a packed Gill Coliseum. Force scored first in the floor exercise, tallying a 9.925 in her only event of the night.

One week after taking first over No. 7 Kentucky in a four-way meet at Illinois, the Oregon State Gymnastics team fell to the No. 4 Utah Utes this afternoon in Gill Coliseum with a final score of 197.975-195.450.

This being their first of six consecutive meets against Pac-12 teams, the Beavers now sit 0-1 overall and in-conference.

In the meet, OSU sophomore Kaitlyn Yanish took to the all-arounder title for the second time in her career, combining for 38.925 points total on the night.

“I thought tonight was really good,” Yanish said. “I’m definitely going to calm my nerves for the next meet, I kept getting a little bit ahead of myself. I’m just going to take the experience, the good and the bad, and try to build off of that for next week.”

Yanish’s best performance, much like the Beavers team, came on the floor where she tallied up a 9.850. Her teammate, sophomore Savanna Force, dominated the floor exercise by earning a 9.925 to take first overall on the mat.

“It was just so much fun to get back out there in front of our home crowd,” Force said. “I think it just comes with experience too, like freshman year was definitely a challenge and it took me a while to figure out, but I’m definitely feeling a lot more comfortable in my gymnastics and who I am as a person. I think that confidence is helping me do the gymnastics I’ve always been able to.”

Force earned the highest event score for the Beavers for the second week in a row, adding to her impressive sophomore performance.

OSU junior Isis Lowery scored the second highest total amount of points for Oregon State as she competed on the floor, balance beam and bars with 29.425 on the night.

“We’re training for every event and it’s just a matter of whether you get called up,” Lowery said. “I’ve been ready this season and we definitely need depth on bars. It’s great that my role has extended now to be doing a few more events that I’m able to help the team in that way, but every week I just go out and do what I do.”

Although the Beavers had some highs in the meet, Utah was able to grab a higher total score in every event on the night. OSU’s main loss of points came from the balance beam, where the Beavers suffered from multiple falls.

Oregon State Gymnastics Head Coach Tanya Chaplin said although the Beavers didn’t do as well on the beam as they did in Illinois, she still sees some positive things moving forward.

“It is early in the season and half of our lineup is brand new. It was just getting that experience, they did a great job in Illinois,” Chaplin said. “It’s right there in them, so you know that what we want to work on is to really perform those routines.”

Next week, the Beavers will be traveling to Seattle to take on the Washington Huskies on Saturday, January 26 at 7:30 p.m.