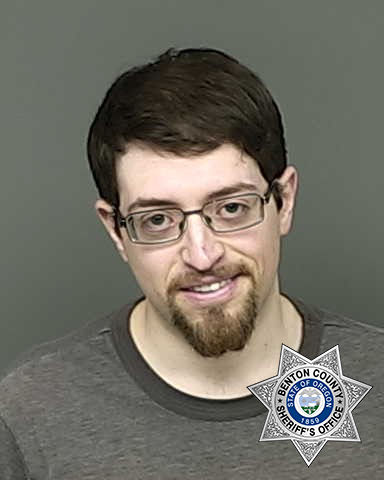 Andrew Oswalt, an Oregon State University Ph.D. candidate, was booked into the Benton County Jail today after being sentenced to a total of 40 days incarceration for a hate crime and associated criminal mischief.

Andrew Oswalt, an Oregon State University Ph.D. candidate who holds white nationalist beliefs, was relocated to the Benton County Jail on Wednesday, where he is set to spend a total of 40 days.

Oswalt was sentenced to 30 days in jail, three years of supervised probation and a $500 fine for the crime of first-degree intimidation, which is a felony. He was also barred from contact with the victims in the case. On a related charge of third-degree criminal mischief, a misdemeanor, Oswalt was sentenced to an additional 10 days in jail, a further $250 fine and 3 years of probation concurrent with his other sentence.

Oswalt is not currently registered for winter term classes.

After signing a notice of his right to appeal the court’s decision at the end of the sentencing, Oswalt was handcuffed and taken into custody by the Benton County Sheriff’s Office.

His defense attorney, Nicolas Ortiz, did not respond to a request from The Barometer for comment. In an interview with the Corvallis Gazette-Times, Ortiz said his client intends to appeal the conviction, but another lawyer will provide counsel.

All of the charges relate to Oswalt and a companion placing stickers on cars belonging to members of the activist group Showing Up for Racial Justice. The stickers contained a racial slur against African-Americans.

For placing the stickers, Oswalt was convicted on three counts of intimidation in the first degree and two counts of criminal mischief in the third degree. Chief Deputy District Attorney Ryan Joslin, one of the two prosecutors in this case, said the three separate counts were associated with three different motives for the crime: race, color and religion. These three counts, as well as one of the counts of criminal mischief, were merged for the purposes of sentencing as they all related to the same victim.

The crime of criminal mischief was connected to placing a sticker on a different individual’s vehicle, SURJ member Susan Breckenridge.

At the hearing, the prosecution asked for the maximum sentence under the Oregon legislature’s sentencing guidelines for intimidation. Defendants with no prior felony convictions, like Oswalt, can face up to 30 days in jail and the other associated punishments.

Chris Knutson, a faculty instructor who has worked with Oswalt in the OSU Chemistry Department, asked the court to “minimize the tragedy.” He does not agree with his colleague’s white nationalist views, but believes Oswalt will be negatively socialized in jail.

“At this point, Andrew’s chances of employment in his chosen field are virtually none,” Knutson said to the judge.

Despite Knutson’s and Oswalt’s own requests for leniency, Judge David B. Connell said Oswalt’s actions were responsible for “sowing seeds of hatred in this community,” and he handed down the maximum 30 day sentence. Connell went on to say he hopes the 28-year-old will abandon his white nationalist beliefs in the future.

The prosecution of this case was overseen by John Haroldson, the district attorney for Benton County, who believes justice was served in this case.

“Hate crimes should not be tolerated,” Haroldson said. “For any offense that is committed with that motive, there should be a higher level of accountability.”

At this time, Oswalt is not registered for classes during the upcoming term, according to OSU Vice President for University Relations and Marketing Steve Clark.

The university respects the court’s decision that Oswalt’s actions were in violation of state law, according to Clark.

The Office of Student Conduct and Community Standards reviews student criminal convictions and evaluates the possibility of academic sanctions. If sanctions are deemed appropriate, based on the crime and the student’s criminal record, these could include suspension or expulsion.

“The university follows procedures of due process that affords everyone the opportunity to have their case heard and fully evaluated,” Clark said.

While unable to comment on the individual case, Clark reiterated the university’s disavowal of white nationalist beliefs.

“This university’s values and mission support inclusivity and diversity in our community,” Clark said. “We have said that discriminatory viewpoints are wrong, and do not represent the university or the OSU community.”