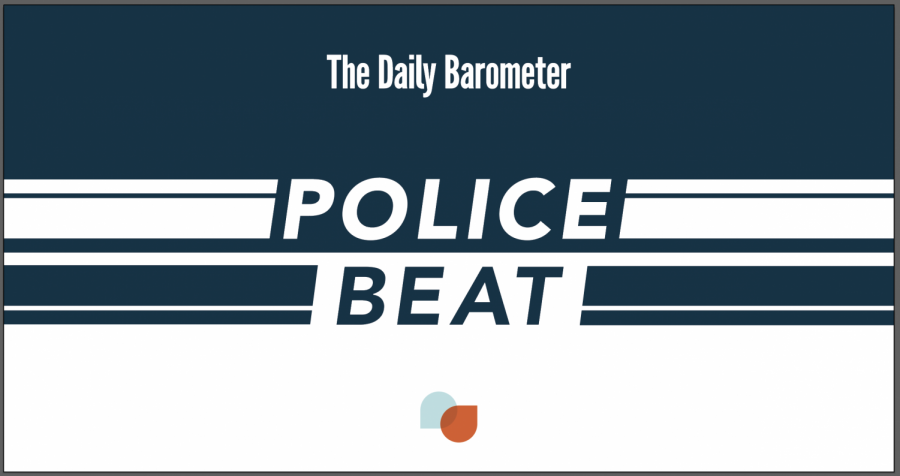 An officer responded to a report of a vehicle rear-ending an on-duty Oregon State Trooper. The trooper was in a marked Oregon State Police vehicle. According to the log, the driver stated that they reached down to pick up a scraper because their windshield was fogged over when they collided with the trooper at a slow speed. The driver was cited for Careless Driving.

An officer responded to a report of a public argument. One individual (a woman) was experiencing a mental health issue. The other party involved (a man) was trying to help them calm down. The woman pushed the man, causing him to depart. The woman was still upset, but did not pose a risk to herself or others. According to the log, she was “left to smoke a cigarette and calm down.”

The Assistant Principal at Linus Pauling Middle School called to report a suspicious male on the school campus. Staff reported that the man was standing between the main building and the north building asking students for high fives. He was also described as under the influence of drugs. Upon questioning by school staff, the man claimed he was a firefighter, then changed his position to a Parks and Recreation employee. The man left the area.

The man was later identified after he caused several disturbances at the Timber Hill Shopping Center. According to the log, the man’s behavior was consistent with a person under the influence of a CNS stimulant. The man was issued a trespass notice for Linus Pauling and advised not to return.

A caller reported that a white man with a forehead tattoo approached him at the bus stop, said he had heroin, and showed them several balls of tin foil before walking away. The description matched that of a suspect who the officer knew had multiple warrants for his arrest. Officers were unable to locate the suspect after arriving on the scene.

A caller, in Portland at the time, reported that they had seen an unknown person in their residence via video surveillance. The video was timestamped at 4 p.m., but the caller just received the alert via phone minutes before calling the police at approximately 8:30 p.m. The caller indicated that they’d been having technical trouble with their security system, but that day they had received three video alerts showing an unknown person in their living room at 4 p.m., 6 p.m., and 8:03 p.m. The officer responded to the residence and saw that the front doors and windows were secured. The caller asked the officer to check the rear doors and windows, giving consent to enter the backyard. The rear doors and windows were also secure and there was no other evidence of anyone being in or around the residence. The officer asked the caller to follow up if there were any missing or damaged items when they returned home. The case was discontinued due to the lack of evidence.

An officer was dispatched to a local store for a welfare check on a woman lying on a bench inside the lobby. On arrival, the officer contacted and identified the woman, who had a valid trespass notice on file for the store. The manager, however, opted not to press charges. The officer directed the woman to leave and reminded her of the trespass notice. She walked out of the store.

After driving around the side of the building to make sure she had left the property, the officer located the woman in a flower bed area along the wall of the building. She was squatting with her pants pulled down and, according to the log, the officer “could see a stream of liquid coming from her genital region.” The woman was in the open and within public view. When the officer asked what she was doing, the woman responded “I’m peeing.” The officer issued and explained a citation for Human Waste.

Officers responded to a burglary in progress. The caller reported that an unknown person was inside their garage. The caller indicated that they knew this because they could see a flashlight and heard someone moving items inside the garage. On investigation, officers concluded that the suspect entered through an unsecured garage door and then ransacked the garage’s contents. The suspect was located nearby and arrested.

An officer was dispatched to a local apartment complex after receiving a report of a male camping in the building’s shared laundry area. The reporting party indicated that the complex is secured, however there is a history of issues with people making their way into the complex to sleep in the hallways.

The officer located the suspect and identified them with the help of their passport and several Albany Police citations, which they handed over to verify their identity. The suspect had five confirmed Albany Municipal Court Warrants. The officer completed a citation for the warrants.

An officer responded to a report of an unconscious male in a toilet stall at a local park. On arrival, the man was identified from prior police contacts. Dispatch confirmed that the man had three Corvallis Municipal Court Warrants. Because the man was unconscious, unresponsive and unable to care for himself, the officer issued a citation in lieu of an arrest and the man was transported to Good Samaritan Hospital for treatment for intoxication.

Police received report of shoplifting at a local grocery store. On arrival, the reporting party stated that she contacted a woman they recognized who had previously been trespassed from the store. The caller escorted the woman out of the store after she had concealed an alcoholic beverage under her jacket. According to the log, the caller stated that the suspect “she would steal whatever she wanted,” refused to give the drink back, and asked if the caller was going to touch her to get the drink back. The caller said no. The suspect is on video exiting the store with the caller. The caller also indicated that the woman was on video concealing alcohol and then leaving the store the previous day as well.

The officer located the suspect nearby. She indicated she was on her way back to the same store. The officer explained that she was not allowed back there and that she was currently under arrest for stealing from there. The suspect denied all accusations despite the video evidence. The officer issued her a citation for two counts of Trespass I and two counts of Theft III. The video was entered into evidence and sent to the District Attorney’s Office.

After receiving a wireless panic holdup alarm, an officer responded to a local bank. On arrival, the officer recognized a male suspect standing next to the building near trash cans. According to the log, the suspect then said “I’m guessing you’re here for the button I just pushed.” The suspect explained that he had found a remote in a nearby trashcan and had pushed the button.

According to the log, the officer recalled from earlier in the week that the suspect had several warrants for his arrest. Dispatch confirmed that there were five warrants for various different charges, including Possession of Meth and Felon in Possession of a Weapon. The officer issued citations rather than taking him into custody and explained his court requirements.

An individual reported theft of mail. An officer made contact with the reporting party, who provided an opened and emptied envelope. The reporting party indicated that the envelope was sitting in that condition in their mailbox that morning and that they believed the envelope could have contained a financial aid check from OSU. However, they were unable to confirm with certainty of it had the approximately $2000 check or university paperwork enclosed. The officer forwarded the envelope to the OSP Crime Lab for fingerprinting in hopes of finding an investigative lead.

An officer was dispatched to a local grocery store. On arrival, the officer spoke with an employee who stated that she had asked a woman to leave the store multiple times. The employee also indicated that the woman had locked herself in the bathroom. The officer located the suspect in the bathroom and arrested her for Criminal Trespass II, Resisting Arrest, and a warrant for Open Container. The woman was taken to jail.

A man came to the Law Enforcement Center to turn himself in on a confirmed Benton County warrant for Failure to Report as a Sex Offender. The man’s identity was confirmed by his Oregon ID social security number. The police took custody of him and then left him in the custody of the jail staff.

An officer was dispatched on a report of possible drug activity. The caller reported seeing a female with a pipe and an unknown substance in her hands. On arrival, the officer located the suspect and dispatch confirmed that she had warrants for her arrest. Additionally, she had foil with black residue consistent with heroin. The suspect was arrested for her pre existing warrants and Unlawful Possession of Heroin.

An officer responded to a call for a welfare check on a woman who was seen yelling obscenities and repeatedly falling to the ground. Upon arrival, the officer located the suspect, who was lying face down on the ground. The officer identified the suspect and noticed that she was bleeding from the face. She said that she had injured herself when she fell down. According to the log, the officer could also smell alcohol on the suspect, and she admitted to consuming alcohol about an hour prior. Medics were called and arrived shortly thereafter to evaluate the suspect.

During her medical evaluation, the suspect alleged that someone had stolen a bag of groceries that she sat down at a bus stop. However, officers could find no evidence supporting this claim after speaking to several witnesses in the area and a search.