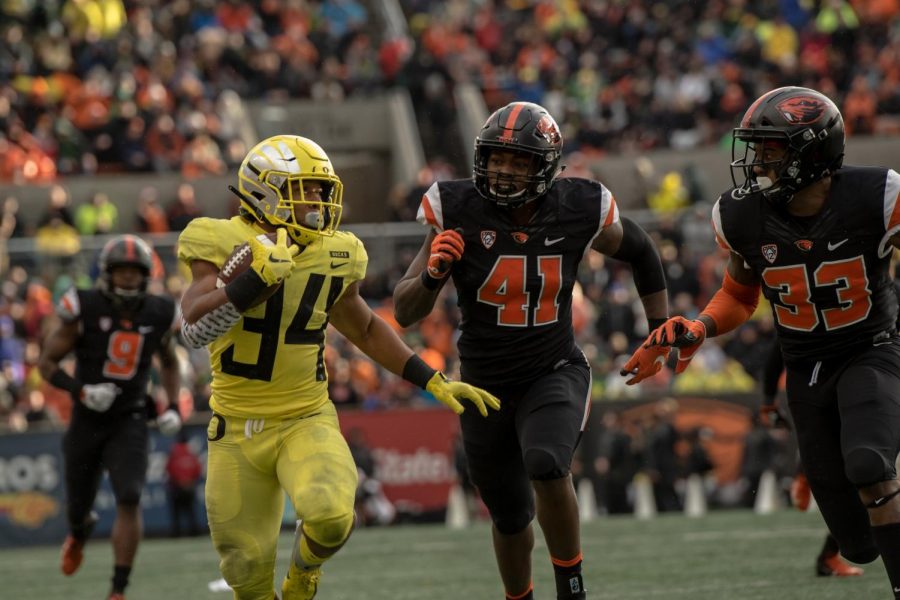 Oregon running back rushes down the sideline as part of his four touchdown performance in the 122nd Civil War matchup.

After posting a 2-10 (1-8) record, the Oregon State Beavers will kick off their clean state against the currently bowl-eligible Oklahoma State Cowboys. This is the first year Oregon State will open the season at home, and the first time the Beavers will host an FBS team on opening day since 2012 against Wisconsin.

The contest against the Cowboys is part of a two-game series where the Beavers will head to Stillwater in 2020.

Oregon State’s schedule features nine teams that are bowl eligible this season, and they will compete against three teams that finished their 2018 campaigns in the AP Top 25.

This matchup will be the 123rd edition of the Civil War series against the Oregon Ducks. Although this perennial matchup may hold regional importance, the recent score lines have made the rivalry hard to watch as the Beavers have lost two straight with a combined score of 124-25. The Beavers will have the entire 2019 season to get things into shape prior to traveling to Autzen Stadium during Thanksgiving weekend.

The Huskies have been consistent as they have been crowned the Pac-12 champion two out of the last three years. Washington finished this season first in the conference in total defense, and after finishing this year’s campaign with the 15th best rushing defense in the nation, good enough to be the best in the conference, OSU’s rushing attack featuring freshman breakout running back Jermar Jefferson will have its hands full to keep the game competitive.

The Beavers home opener will also be the season opener for the first time since 2015 when they defeated Weber State. But Oklahoma State faces tougher competition than Weber States since the Cowboys compete in the Big XII conference, so it is not a typical squash match usually scheduled for early games. For what it is worth, both schools use the initialism OSU and both schools wear the orange and black.

The Utes had a quiet surge to the top of the conference, although they finished the season without a victory against a team that finished the season in the AP Top 25, they were still able to claim the Pac-12 South title. Their losses to No. 9 Washington and No. 13 Washington State were by no means blow outs. By the time this matchup rolls in, the Utes will be able to show if this team is the real deal.

The Washington State Cougars have been a team on the rise after senior transfer quarterback Gardner Minshew II led the team by posting the second-most passing yards in the entire nation. With college football eligibility running out for the breakout Pac-12 star, it leaves offseason question marks for a Cougar team looking to improve upon their 2018 season and stay competitive against their in-state rival.