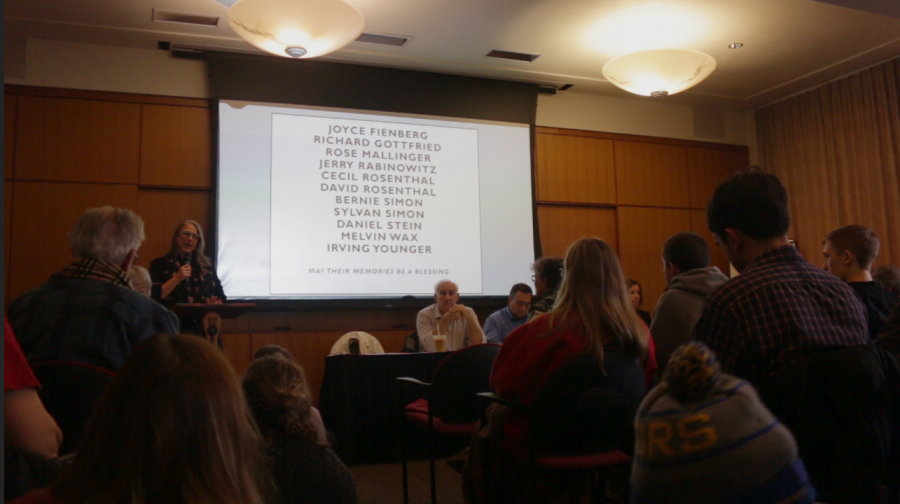 On Wednesday, four professors in the School of History, Philosophy and Religion, and one professor from the School of Writing, Literature and Film held a panel in the Journey Room of the Memorial Union to address the recent shooting at the Tree of Life Synagogue in Pittsburgh, and the current climate of anti-Semitism in the United States.

The panel gathered approximately 100 people, filling every seat in the room, and occupying every aisle between. Professors, priests, rabbis, students and parents of all ages came to this discussion.

Amy Koehlinger, a professor for the school of History, Philosophy and Religion, opened the panel by asking the audience to pause and reflect on this exceptional moment in American history.

“Speaking as a historian I am especially alarmed by the mass shooting of American Jews, because understood in its context, the shooting is a rupture and a reversal of the history of Jews in America, and it’s a red flag that signals a dangerous depending of currents of nationalism, anti-Semitism and intolerance in American culture,” Koehlinger said.

After the shooting, Koehlinger says she revised how she taught the history of American Jews in her classroom by devoting an entire lecture in her course to anti-Semitism.

“While there has certainly been violence perpetrated against Jews, I have always emphasized with my students that anti-Semitism in the U.S. has never took on the truly murderous edges that have visited the communities of African-Americans and indigenous peoples in the U.S.,” Koehlinger said.

Another professor in the school of history, philosophy and religion, Kara Ritzheimer, continued by talking about fascism, and whether or not the United States is living in an age resembling that of the 1920s or 1930s.

I find myself grappling with these comparisons quite a bit,” Ritzheimer said. “This past Saturday the shooter who murdered these Jews in the Tree of Life, Pittsburgh synagogue, shouted ‘all Jews must die.’ This murderous statement calls to mind Nazi efforts in the early 40s to murder all European Jews.”

But she wonders if her colleagues are falling into a trap when they use this comparison as a way to measure how far we are moving away from democracy and falling into fascism. It is possible that either they’ll pull and stretch too far to make this comparison work and be called ridiculous or hyperbolic, or they’ll pull and push to little and be ignored for the fact that the 1920s and 30s seem too old and too distant to draw reasonable comparison, said Ritzheimer.

“The exceptionality of the 1920s and 1930s; an era filled with high unemployment, political street violence and even prominent assassinations may provide some false assurance that things aren’t that bad,” Ritzheimer said, “I’m wondering if it makes more sense to think of fascism not as policies, but as a style.”

She explained that fascists, both those in Italy and Germany, were typically anti-pacifist, anti-liberal, anti-Marxist and anti-democratic, meaning they rejected individual rights like free speech and equality before the law.  They projected an image of hyper masculinity and dynamism, were highly aware of the power of propaganda, and were known for belittling their enemies, condemning the press and frequently dividing people by ‘us and them.’

The School of History, Philosophy and Religion was also the area of study for the final speaker, Professor Paul Kopperman, who began by reminding the audience that there is still a lot to be learned from history, usable to combat the anti-Semitism taking place today.

“Pope John the 23rd and the fundamentally important Council known as Vatican II would put a final declaration to the Jews. These were nice words, as were the words by the council of churches, but the point is, they were followed up on by church after church after church, and denomination after denomination, fundamentally changing what they were going to say, and what the children would be learning about the Jews,” Kopperman said.

Continuing, Kopperman explains that this new teaching goes on for decades until the present, and more dialogue is opened up between Christian and Jews throughout the process. Along the way, bigotry is marginalized within Christianity, and while there were still anti-Semitic clergy and congregations, the denominations they represented disowned them.

After the speeches ended, Professor of history Jonathan Katz talked about how flash panels are very important to have when a troublesome current event is still in the consciousness of people’s minds.

“Historians in particular have an ability to look at how complicated issues are, and not look for simplistic explanations, but to explain the roots of a contemporary issue,” Katz said.

Katz explains that his background is in the study of the Middle East and Islam, and his focus is on the currently complicated issues of anti-Zionism and anti-Semitism in the region.

“I think people have made the connection to the president and his rhetoric in terms of what he says actually does,” Katz said. “He is not pulling the trigger, but I think he does enable some people to come out of the woodwork, and feel confident that they can do these things.”