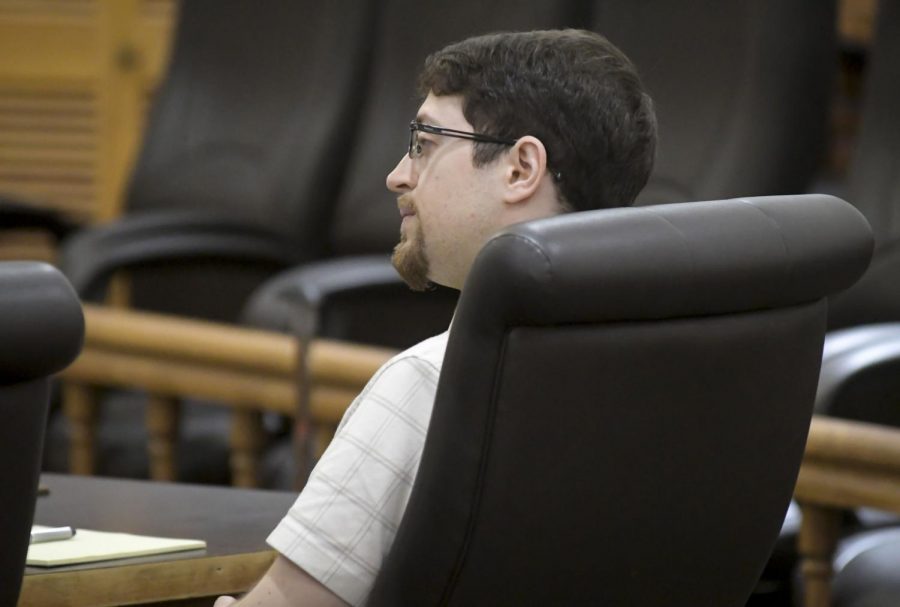 Andrew Oswalt, an OSU Ph.D. candidate, in court during the first day of his criminal trial. He would later be found guilty on all counts, including three felony hate crime charges.

Oregon State University Ph.D. candidate Andrew Oswalt was found guilty beyond a reasonable doubt on three counts of intimidation in the first degree and two counts of criminal mischief in the third degree.

Judge David B. Connell came to this verdict on Thursday after a two-day trial where seven witnesses were examined and more than 60 pieces of evidence were considered. Oswalt’s sentencing is scheduled for Dec. 12 at 11 a.m. in the Benton County Courthouse.

All of the charges relate to Oswalt and an unidentified companion affixing racist stickers on cars belonging to members of the activist group Showing Up for Racial Justice on June 17, 2017. The stickers read ‘Racism is a horrible disease, you catch it from n——.”

Security camera footage from the First Alternative Co-Op, where SURJ holds their monthly meetings, shows Oswalt and the other man believed to have been involved in attaching the stickers. The pair also placed anti-Semitic flyers on cars in the staff overflow parking lot.

“There was an intent to cause terror in the hearts and minds of minority individuals,” Joslin said.

During his closing statements, Joslin argued that Oswalt had caused substantial inconvenience to the property owners by violating their ability to express their beliefs on their own vehicles. Even if the cars were still mechanically operational, the racist stickers obscured the owners’ own decals and prevented them from driving in public once they discovered the stickers.

In Oswalt’s defense, his attorney Nicolas Ortiz argued that there was not enough evidence to suggest the defendant was aware of the identities of the car owners beforehand, including their race or religion. This, he argued, should lead the court to rule that Oswalt was not targeting them based on these characteristics.

In response, Joslin pointed to the harm done to other Corvallis community members of color and people of the Jewish faith, who were targeted by the expression of these views. The flyers depicted caricatures of Jewish individuals as well as unsubstantiated conspiracy theories about the Jewish people’s control of the American government. This kind of anti-Semitism is a common white nationalist belief.

“We have an ethical duty to only pursue charges that we think are supported by fact and the law, and we did in this case, so we’re pleased with the outcome,” Joslin said in an interview.

Oswalt, who chose not to testify on his own behalf, declined a request for comment.

Corvallis Police Department Officer Luke Thomas, who searched Oswalt’s residence in connection to the crimes, said during cross-examination that the police received information from an individual claiming to be a relative of the other man thought to be involved in placing the materials, but could not find probable cause.

This conviction makes Oswalt the eighth person to be convicted of first-degree intimidation in the state of Oregon in the last five years, records obtained by The Oregonian indicate. It is the first time this crime has been prosecuted in Benton County since 2010, where the charge was dismissed by Connell, the same judge who found Oswalt guilty.