Champion on the field and in the classroom 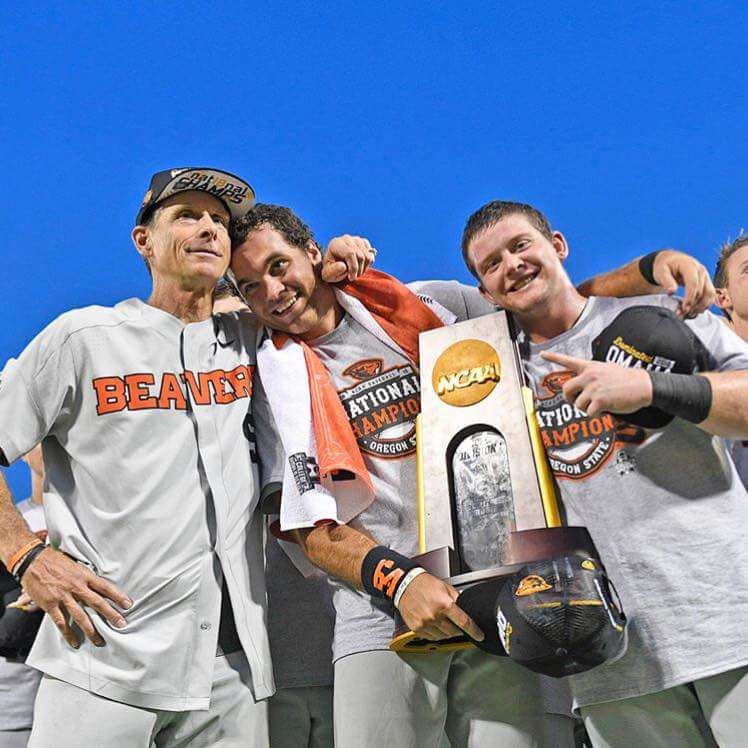 From becoming a walk-on to winning a national championship, former outfielder Jack Anderson ended his baseball career living a success story. Though his impact on the field was monumental, it was what Anderson did beyond the fence that defined who he was as a person, and as a student.

Graduating from Oregon State University in 2018 with a degree in kinesiology, Anderson’s next step in life was not to advance to Major League Baseball, but to attend Regis University with the hopes of one day becoming a physical therapist.

Before he had accepted admittance to Regis, however, Anderson had a shot at making it in the MLB by declaring for the draft. He instead declined, deciding to attend Regis and become part of an 82-student physical therapy program.

Anderson, who held a 3.69 GPA in the midst of his final term at OSU, explained that the MLB was never his end goal and he would rather spend his time working towards the opportunity of a career.

“I loved the game of baseball, but didn’t want to lose the opportunity of physical therapy school,” Anderson said.

Pat Bailey, Oregon State Baseball Interim Head Coach, said Anderson made his own decision to continue his path of education instead of taking a bigger risk and declaring for the MLB draft.

“I was very proud of him,” Bailey described. “Jack is a wonderful young man, who has a bright future ahead of him.”

In his baseball career at OSU, Anderson earned Pac-12 All-Academic First Team in 2016, 2017 and 2018. Before Anderson was in college however, he knew he wanted to be a doctor even if he was going to play baseball.

The idea to work in physical therapy sprouted while taking an anatomy class in high school, according to Anderson. As a multiple- sport athlete at Lake Oswego High School, he had lots of experiences with trainers and sports injuries.

Prior to walking on to the baseball program in 2015, Anderson spent his first year focusing on school as a declared kinesiology major at OSU while working out at Dixon Recreation Center in preparation for baseball tryouts.

Jay Penry, clinical assistant professor with the College of of Public Health and Human Sciences, said Anderson fit right in to the major and was a positive influence in the classroom.

“He was kind of a quiet leader, he never really made a show of himself in the classroom but he did speak up, and when he, did he had really good things to say,” Penry said. “He was a very solid student.”

According to Penry, Anderson would often stayed after class to discuss the material, including injuries Anderson had sustained during his time of the field.

“He was in my kinesiology class, so we would often talk about muscles and bones and how they work together, and health and injuries,” Penry said. “He was great, he was very into the material and you only have a few students that talk about things and he was one of them. He’s a good guy, I liked him.”

Without any teammates in the kinesiology major, Anderson described how he would sometimes have to show up to practice an hour late because he had to take certain classes and labs during baseball season.

Anderson added that his daily schedule usually consisted of two classes, one lab and a baseball practice for about three years straight. With his major, he did not want the coaches to have to keep a closer eye on his schoolwork.

“I took it upon myself to not let coaches become worried about my classes,” Anderson said.

According to Bailey, however, the coaches do not have to stay on top of their players often to make sure that they’re doing well in school due to proper recruitment.

Anderson said the coaches came to understand that when he was on the field, he would give his all and school was not going to affect his performance.

According to Bailey, although Anderson may have missed some practice every now and again, it was never a problem.

“All of our guys miss practice at some points, but the guys are students first and athletes second,” Bailey said.

Former teammate, junior outfielder Joe Casey, said all of the school and team commitments did not keep Anderson from having his own time. Casey explained that he learned about time management from Anderson during their time of being teammates.

“He showed that you can take a hard major and still find time for yourself and your teammates,” Casey said.

After the team won the 2018 NCAA College World Series Finals, Anderson was named the Pac-12 Scholar-Athlete of the Year in the midst of retiring his baseball career a national champion. According to Anderson, it was a culmination of five years and meant a lot to his close ones and himself.

In 2017, former Oregon State pitcher Max Engelbrekt won the same award, which made an impression on Anderson, who knew about the honor since his sophomore year. To win the award, the athlete has to be at senior standing and must play in at least 50 percent of the scheduled games, a challenge on it’s own for Anderson.

Throughout his college career, Anderson said that he got to make other connections with people in his classes because no one on the team had the same schoolwork. Now attending Regis, Anderson said he tries to treat his classmates as if they were his teammates, but the camaraderie he had on the OSU baseball team is something he will always miss.