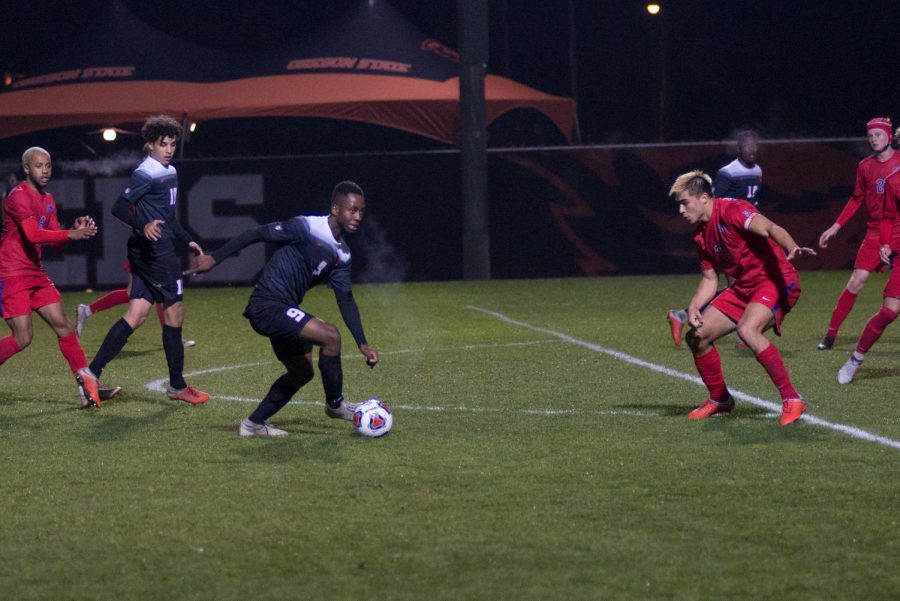 In 2017, Oregon State University Men’s Soccer was ranked second-to-last in the PAC-12. Yet, with the ushering in of a new coaching staff and culture, the Beavers have propelled to second in the conference this year, qualifying for the NCAA tournament for the first time since 2014, the fourth time in the program’s history.

The Beavers completed their PAC-12 season on Nov. 9 against Washington, finishing with their best win total since 2014, a 10-5-3 record. The team’s newfound success can be largely attributed to Terry Boss, who was hired on as the men’s soccer head coach in the winter of 2017.

Boss, who grew up in Philomath, played professional soccer with the Seattle Sounders and had a short stint as an assistant coach at OSU in 2013 prior to coaching at the University of Virginia, where he led the team to a national championship in 2014.

He was selected in a committee process led by Senior Associate Athletic Director for Student-Athlete Development and Sports Administrator, Kimya Massey. The committee hoped to find someone with ties to the northwest, previous success as a player and a vision for OSU as a top-25 program.

“His level of preparation about what his plan would be was really strong. He also just has a great presence about him in terms of how he presents himself, which is very genuine and authentic,” Massey said.

Boss has brought  multiple  new student-athletes to the team this year, including some international players. Consequently, he has strived to reconstruct the team based on the philosophies and very specific visions he has for the program.

“I am more concerned about who you are and who you want to become than where you are from. Foreign or abroad, we are looking for young men who exemplify characteristics that honor the badge, value academics and who believe in our brand of football,” Boss said.

Don Tchilao, a fourth-year and captain of the OSU men’s soccer team, described his initial hesitation about the influx of new players.

“I wasn’t quite sure how that was going to look. But now, looking back, bringing in those new guys, it was good for the transition we were in, the change of culture,” Tchilao said.

Boss selected his coaching staff after arriving in late 2017, focusing on their ability to lead by example.

“Locker rooms care about what your staff cares about, to some degree. I knew the core values I wanted our locker room to represent, and so it was a really easy decision to go out and find a staff of men that could organically mirror those core values,” Boss said.

These core values, as described by Boss, include a pursuit of excellence: in the classroom, on the field and in relationships. Boss also emphasized the importance of continuous improvement and pushing the envelope, guided by the coaching staff, but stated that they are lucky to work with players who are intrinsically motivated.

“We always talk about having a passion,” Boss said. “Next, you need to find a purpose that’s bigger than yourself. I think that leads to performance. Then from there, you build a platform to be able to impact the world around you.”

In addition to values, Boss has brought an entirely new style to the team. Tchilao describes the changes in tactics, formation and style of play, in addition to the way in which these changes have led to the team’s success.

“Everything [Boss] is about aligns with how us, as the players, have wanted to play,” Tchilao said. “I think he’s been the coach that we’d all been dreaming about getting.”

Despite the change in tactics, the team’s focus has largely been on themselves, rather than on the opposition. Boss describes the goal of the team as achieving the best version of themselves, focusing not on the wins, losses or accolades, but the process.

As a result, Massey has noticed a significant difference in the team’s confidence.

Boss also described the change he has noticed among the team since arriving at OSU.

“For us, the greatest joy we’ve had as a staff is watching the young men in the locker room become men of resolve that we knew they were,” Boss said. “Don’t get me wrong, we’ve had some heartbreak along the way, we’ve had some rough moments. But I honestly believe it’s those kind of rough moments that forged and galvanized this group into the team they are today.”

Tchilao, who considered transferring schools last year, feels fortunate to be a member of the team this year under the leadership of Boss.

“I’m glad everything worked out the way it did, and that I’m still here, because what we’re doing this year and the fact I’m able to do it as a Beaver has been special,” Tchilao said. “This year is going to be the year that propels everything forward.”

Looking forward, Massey emphasized that the administration is working to invest more in both the men and women’s soccer programs at OSU, in order to ensure that both teams have better facilities and support.

“I think we can be a perennial top-ten, top-fifteen team. I really do,” Massey said.

Ultimately, Boss described how fortunate he feels to be back in Corvallis, as the leader of the cultural change taking place with OSU men’s soccer — not only leading the team to a strong conference season finish, but looking forward to future years.

“To come back and be a part of this program, and continue to build on the foundation of what this place can be is something that’s near and dear to my heart,” Boss said.