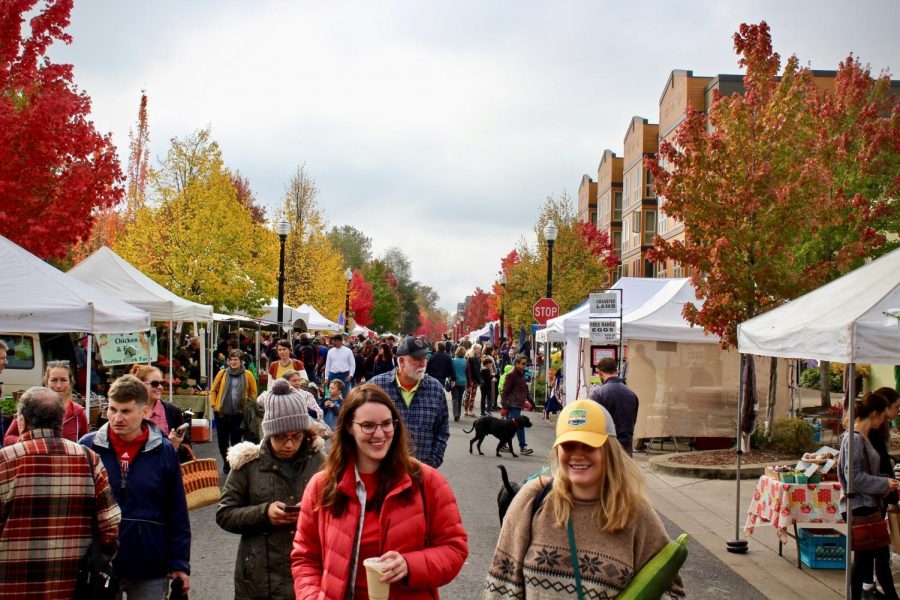 It’s early morning, and a warm fog has rolled in over 1st Street. Damp, bright leaves are blown off the trees by the light wind, and early rising farmers start to set up their stands for the weekly market. In the summer and fall seasons, the Corvallis farming community gathers every Saturday morning downtown to sell their harvest and give back to the community.

One of those farmers, Tom Thieme, runs a booth for his farm at the market. He sells a wide variety of apples, pears and other apple products like apple cider. He and his wife have been running the booth for many years now.

“It’s been easily 20 years, you know. We used to do Albany and then we started to do Corvallis, all under the same organization,” Thieme said. “Previously I’d been in Tigard and Beaverton and other markets, but we’re getting old, so we decided to consolidate to the Corvallis/Albany area.”

“We have a 17 acre farm, and grow peaches and apples,” Thieme said. “And pears, and plums and a lot of other minor crops.”

Thieme said that he and his wife enjoy the sociability and the excitement of the fair, until it gets too hectic. Regardless, they enjoy meeting people and talking about fruit and food with their customers.

“We’re probably making less than a dollar an hour. All the work we do on our farm, the work my wife does drying apples, making cider, all that,” Thieme said. “We have to do it for some other motivation that I can’t quite define right at the moment. It’s a hard way to make a living.”

Across the street from Thieme’s stand, Ash Sigl and Eden Olsen ran the Lucky Crow Farms booth, selling a variety of assorted produce.

“The market is amazing in Corvallis. It’s really farmer-centric, you have to grow what you’re selling at the market,” Olsen said. “A lot of farmer’s markets are craft-based, but this market is really hyper-local and really supportive of small farmers.”

The Lucky Crow Farms booth is relatively new to the market, as Olsen and Sigl said this year was their second season setting up shop. They went on to say that the time it takes to set up the booth varies throughout the year. In the summer, it takes them at least an hour.

“We harvest and get all of our produce for the market on Friday, and Saturday morning we’re up at 5:30 a.m. getting things ready to go at 7 a.m.,” Olsen said. “The market starts at nine, we don’t get out of here until 1:30 p.m., when we take everything out.”

This Saturday was the end of the market season for Lucky Crow Farms, Olsen went on to say. However, Olsen and Sigl are looking forward to seeing the farm progress and evolve.

Down the street from the Lucky Crow Farms booth, Mario DiBenedetto and Dylana Kapuler are set up working the Peace Seedlings booth. The pair make a living selling seeds, tubers and seasonal flowers. Peace Seedlings has been coming to the farmer’s market for at least the last ten years, DiBenedetto said.

“We’ve been coming here at least a decade, maybe 12 years. We started out primarily focused on more seeds, like vegetable and flower seeds, but we’ve sort of branched out into multiple areas,” DiBenedetto said. “Obviously we’ve got fresh flowers, but we also specialize in root crops and rare South American root crops.”

DiBenedetto went on to talk about Peace Seedling’s transition from seeds to flowers as their main focus.

“When you’re breeding, especially flower breeding, there’s certain things you want to grow a lot. It can take thousands of plants to see one unique one. When you see that, you want to chop out everything else so you don’t cross-pollinate,” DiBenedetto said. “Then you end up saying ‘Oh, I have all of these flowers to cut out. Well, let’s start selling fresh flowers.’”

According to Kapuler, the pair’s business is very small scale, operating out of two and half acres of land off of Highway 34.

“It’s a fun niche, no one’s selling organic flowers. You can make decent money,” DiBenedetto said. “And yeah, compared to organic produce and fruits and vegetables, there wasn’t as much competition. We do full time for the both of us.”

“We love selling fresh organic flowers at the market, but seed production and breeding for the public domain are the most important things we do,” they said via email.

The agricultural work that DiBenedetto and Kapuler do with Peace Seedlings not only provides a living for them, but also happiness, they said.

“We get a lot of comments about just how beautiful they are or how they just uplift people. That’s sort of a good aspect. We’re really passionate about representing organic agriculture and making sure people realize that their flowers and their food don’t have excessive chemicals and poison sprayed on them,” DiBenedetto said. “That’s probably the most important part, just representing what agriculture should be, you know. I feel it should be natural.”