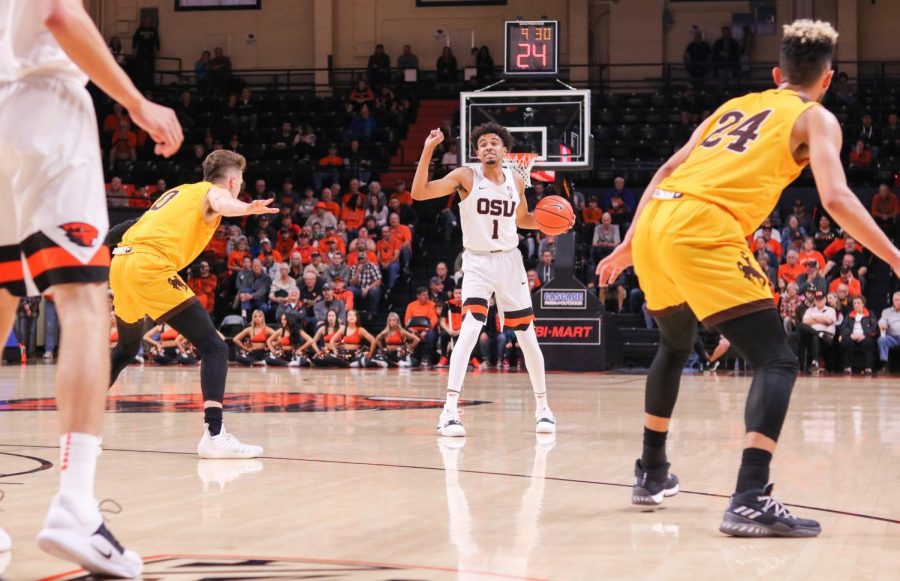 Senior point guard Stephen Thompson Jr. dribbles up court and calls for an offensive set up from his teammates. Thompson Jr. ended the night with 16 points, four assists and two steals to help the Beavers advance to 2-0 overall.

Oregon State Men’s Basketball came away this Saturday with a decisive 83-64 victory over the Wyoming Cowboys, bringing their record to 2-0 in their second game of the season.

Junior forward Tres Tinkle led the team in overall scoring with 28 points, and junior forward, Kylor Kelley, followed behind with 12, including four alley-oops and four blocks.

OSU Head Coach Wayne Tinkle expressed pride with his teams effort, and said that the team’s goal of playing better than Tuesday was accomplished.

If they had all their players, Tinkle said, “It could’ve been a different outcome, but I’m proud of our guys for understanding that during the game and not playing with less effort and focus. We came out and did what we had to do; had a couple lulls, but all in all, I’m really proud of the guys for the way they took it to the court.”

Coach Tinkle acknowledged the importance for his team to have big players like his son Tres, sophomore forward Alfred Hollins and Kelley who can bring a lot of physicality, but said that they have to develop more than that.

“Hollins really stepped up, and he continues to learn and understand what a nightmare he is matchup wise,” Tinkle said. “Big Kylor is another guy who’s a work in progress, but today he had four blocks and some great finishes at the rim, so I’m excited for these two and the way the rest of the guys contributed.”

Hollins gave his perspective, saying that it was important for him to be driving on the glass, being aggressive in the key, fighting for hard points and boosting the teams moral.

“Also me buying into the system, figuring out matchups problems for different teams, playing to my strengths in our system and getting out and doing what we do best, grinding and as coach says, being on the gas with no breaks,” Hollins said.

Kelley said that it was important for him to be able to get around guys, put himself in the position to get rebounds and assists near the basket for quick alley-oops.

“I feel pretty well about my progress so far, definitely have to get bigger because we’ll be playing against bigger guys soon,” Kelley said.

Coach Tinkle said that it was a point of emphasis to combat Wyoming’s pressure and grit.

“We thought that our size advantage was something that we had to exploit on the glass and guys really responded to that challenge so I’m proud of them for that,” Tinkle said.

Looking towards their next game, Tinkle added that the team needs to clean up some of their zone shifts, work on getting forwards up to the corners by improving recognition and working on forward and guard bumps.

“The focus coming into this game was being better on transition defense than we were on Tuesday, and they had a few in the first half, but the second half, when the game got to be an up-and-down deal, our guys really stuck to that plan of making them play into half court and giving them nothing in transition, so A-plus for that effort on the guys for sure.” Tinkle said.

Next Friday, the Beavers will be facing off against Old Dominion at the U.S. Virgin Islands Paradise Jam.