International student graduates find ‘home is nowhere and everywhere at once’ 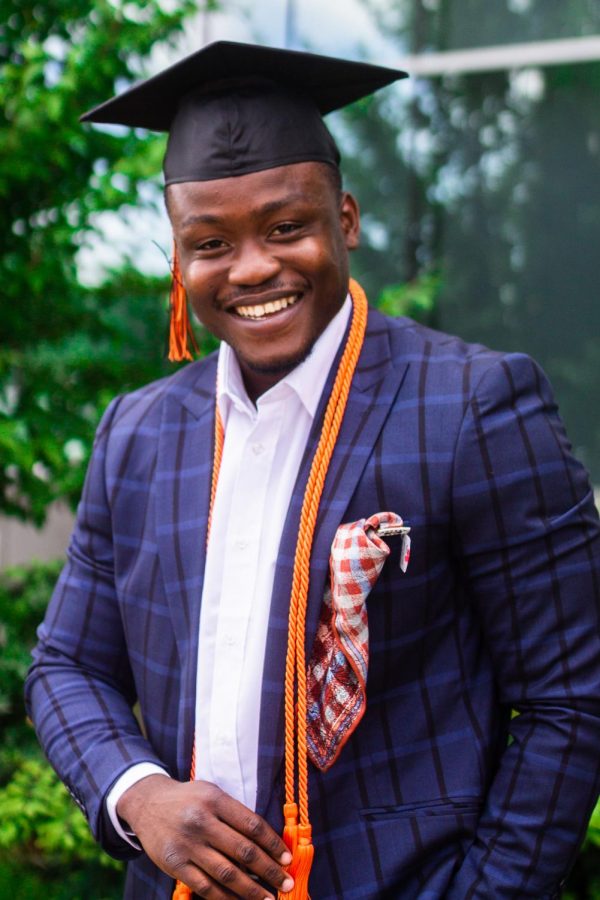 Godson Ehiemere, an Oregon State University international student and industrial engineering graduate, in front of the International Living-Learning Center on the OSU Corvallis, Ore. campus. After graduating, Ehiemere plans on moving to Portland, Ore. to begin a position at a manufacturing company.

Oregon State University graduate student Godson Ehiemere is graduating with a Master of Science degree in industrial engineering this June, and he is one of many international students who will be graduating this spring.

Ehiemere is from Nigeria where he got his undergraduate degree before coming to the United States to attend OSU.

“My overall college experience has been pretty good,” Ehiemere said. “It started off bumpy because I’m the only one in my family who’s here in the United States, everyone is back home. So my first few months here, it was really difficult to adjust, but after some time I found a community of people and thingseventually got easier because those people were helping me solve problems.”

OSU international students graduating this term look back at their time spent in college pursuing their bachelor’s or master’s degree away from home and look forward to their future plans after graduation.

Ehiemere said he adapted to the American system, which is much different than what it is like in Nigeria.

Shuyan Zhang, OSU fourth-year student, is from China and is graduating with a Bachelor of Science degree in mechanical engineering.

“It was very nice to live in Corvallis, [Ore.] and the people in the college are friendly and supportive,” Zhang said.

Fatuma Ali, an OSU graduate student, is from Kenya and is going to graduate with a Master of Public Policy degree. She said she has also attended OSU for her undergraduate degree.

Ali said her experience coming to the U.S. in the beginning was a culture shock.

According to Ali, she was eventually able to find that support through the university’s Lonnie B. Harris Black Cultural Center and African Students Association which played a big role in her feeling like she belongs at OSU.

Vania Halim, OSU fourth-year student, is from Singapore and is going to graduate with a Bachelor of Science degree in chemical engineering.

“I’m a third culture kid, so home is nowhere and everywhere at once,” Halim said. “My family is Chinese-Indonesian, and I was born in Indonesia. We live there now, but I grew up in Singapore for almost a decade so I consider it my home. Even there, the distinctly American accent I picked up at the international school I went to made me stick out, so because of that, and my Indonesian citizenship, I could never really claim to be Singaporean.”

Halim said she came to OSU as an International Cultural Service Program speaker and scholar. She said she was soon able to meet other ICSP scholars and have a meaningful way to contribute to the campus.

According to Halim, she was involved in OSU’s community through cultural organizations, campus ministries, the International Peer Mentoring program, residential education and undergraduate research. She said she made a lot of good friends through these involvements and her experiences have been instrumental in her growth as a person and leader.

“From a young age, my parents instilled a deep love of learning in me, and the opportunity to meet brilliant, dedicated people here and to work and learn alongside them has been an amazing experience that I will always cherish,” Halim said. “There’s nothing quite like the feeling of pure joy I get when I finally understand a concept after countless calculations, textbook pages, failures, office hours, diagrams, revisions of diagrams and discussions with my friends.”

According to Ehiemere, being away from his family, which includes his three sisters and his parents, was difficult.

“I talk to my mom every day just to still get that sense of family that I had when I was back home and that helps,” Ehiemere said. “I think missing home was the most difficult part.”

Ali said it was a challenge being away from home and on her own especially because she is family-oriented. She said she also felt a lack of community at OSU.

“In classes, where you’re the only Black person and trying to find people who are able to understand you or able to engage with you in those classes and my professors, that was a little bit challenging as well,” Ali said.

According to Halim, school was a challenge because chemical engineering did not come naturally to her. The program is rigorous and she had to constantly push herself after each failure. She said this took a toll on her physically and emotionally to where she started to think of herself as a machine instead of a person. She said the challenge now is finding a more healthy relationship with the work so she can do what she loves with excellence.

Halim said winters were more challenging at OSU than she expected and that she struggled emotionally during her freshman year. She said this helped her appreciate the rest of the seasons in Oregon.

“But I also vividly remember looking up one day, seeing the entire campus covered with flowers, and realizing that the world had come alive while I was busy looking down,” Halim said. “For the first time in my life, I realized how wonderful the sunshine was, and how beautiful spring could be.”

Ehiemere said his favorite part about going to OSU was the surroundings. He said he never appreciated nature as much as he does now since after coming to the U.S. He has been able to go on hikes and walks with friends and being in touch with nature was a new experience for him.

Ali said she enjoyed learning a lot about different cultures and people while going to school in the U.S. She was able to experience that during her time as a graduate teaching assistant. She said she got the opportunity to engage with students, learn different opinions and perspectives and be understanding and empathetic.

“The challenges might be language and cultural differences,” Zhang said. “Sometimes it is not easy to form very strong relationships [and] friendship with domestic students, and sometimes [I am] not very comfortable being in a English-speaking environment when alone.”

Zhang said she plans to work in the U.S. for three years then attend graduate school afterward.

Ali said her plans after she graduates include applying for jobs. She said she also plans to get experience and use her Optional Practical Training for a year before returning home to work in the public policy field. OPT is a period where students can find a job in their major or find areas of interest to work in. After a year, students can either become fully employed or return to their home country.

Ehiemere said he is going to work for a paid manufacturing company in Portland, Ore. after he graduates starting in June. He said he is also going to get a graduate certificate in engineering management.

“I came back to get my master’s done because I wanted to change career paths,” Ehiemere said. “Now that I’m done, I’m starting in that line of industrial engineering and engineering management. So in my new job, I get to manage people in a paid production facility and I’m excited for that.”

Halim said she got accepted for an internship with Genentech’s Global Supplier Quality team in San Francisco, Calif. She said she is still waiting for her employment authorization document before she can start but is excited to go into the biotech field.

“Knowing that I’ll never be able to truly call one country home is a little bittersweet, but I love that I get the best of all these different cultures,” Halim said.