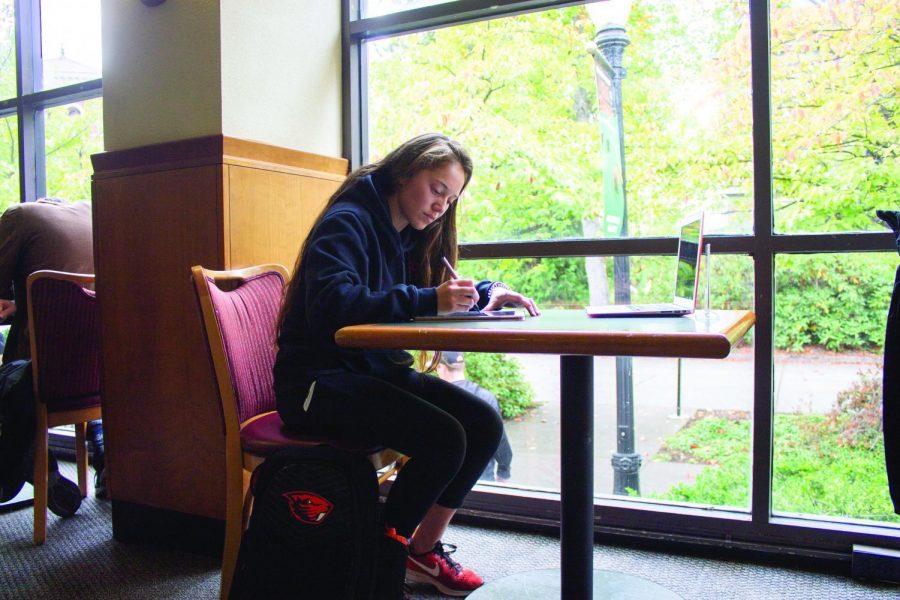 Imagine a cheerleading stunt: three or four athletes using all their power to lift someone up. The work put into it is hard, but the results are stunning. Being on a team of any kind requires that type of effort year round, as some athletes at Oregon State have found. The women’s rowing team, for example, works 20 hours each week on their sport, only cutting it down to eight hours a week during winter term. The cheer and dance team keep their schedules full too, by starting each morning with a 6 a.m. practice. The members of these teams all have a severe dedication to their sports, but do they always have the time?

Junior Women’s Rowing member Cassandra Lozano has some tricks to keep time on her side. She currently works 2 on-campus jobs, is the secretary of a school club, attends rowing practices, and still makes time for school and studying. Organization is a major component to her time-management, according to Lozano.

“Taking it day by day is the best way to keep it under control,” Lozano said. “I keep a bullet journal that helps me lay out my week ahead of time.”

In a typical week, Lozano spends 20 hours at practice, 8 hours at work and 14 hours studying. Rowing practices are on Mondays, Wednesdays and Fridays, and when she has the time, she picks up a late shift at one of her jobs. To her, practice comes first. After her practice schedule is made, she makes time for her first job at Memorial Union. With whatever time remains, Lozano works in a lab on campus. With a schedule like hers, Lozano makes sure she still has time to herself.

“Sundays are the days I save to not think about everything else in the week. I use Fridays and Saturdays for homework and chores so I can make sure I have Sunday left to me. Whatever my mind or body is needing, I save it for Sundays,” Lozano said.

Keeping time to herself is important to her because it gives her time to regroup and check in before a new week starts, Lozano said.

Down time is always needed, no matter when it comes. For Sophomore Gracie Thompson, down time doesn’t come until the end of the day, if it comes at all. Thompson is a second-year dance team member who also works as a dance instructor in Lebanon once a week and is part of a sorority. Her practices are in the morning, and classes typically start sometime after practice is done. Dance team practice takes place from 6 – 8 a.m., leaving most athletes time to shower and change before their classes for the day start. Thompson also uses a planner to keep herself organized, but mistakes still come up.

“I’ve definitely overbooked myself before when it comes to personal appointments like a doctor’s visit. I just always tell myself that it’s school first, then my sport, then my sorority,” Thompson said. Working, studying and dancing all constantly compete with each other for her time.

Sophomore Kira Perdido is a second-year cheerleader who also works at Kidspirit on campus. She has had to learn a lot about time-management since starting at OSU, but she got some of her knowledge and skills from her high school experience.

“When I was in high school I ran track and did cheerleading for the school, and I also did All Star Cheer,” Perdido said.

Keeping a planner and looking ahead are some of the tools she uses to keep her schedule under control. Perdido and Thompson’s coach, Paul Thorpe, is always helping them make the most of their time at practices.

“What works the best for time management is having morning practices,” Thorpe said. “Most of them have practice in the morning, then classes, and then those that have jobs go to work in the evening”.

Thorpe has only been working with this team since April, but before he coached here he was a cheer coach at Weber State University in Utah, and he also did cheer at Weber when he was in college. Something that keeps the team busy aside from practices and performances are fundraisers and clinics. The cheer and dance teams don’t get funded by the school, so most of their funds come from clinics like the one held on October 13.

“The college prep clinic is for anybody who is interested in joining the team ready for next year’s tryouts,” Thorpe said. The team also does about 5 community events each month. An example of a community event they’ve done in the past is cheering for events like Portlandathon, according to Thorpe.

Joining a team or club in college can be extremely rewarding if your time is managed well. Finding priorities and organizing your day based off of them is the best way to get the important things done.

“Buckle down,” Lozano says to incoming athletes. “Prioritize and organize. If you talk to them, coaches will understand if you are a few minutes late to practice for something like a midterm or a teachers’ office hours. Lastly, don’t overestimate yourself. Understand what you can actually get done with the time that you have in a day.”