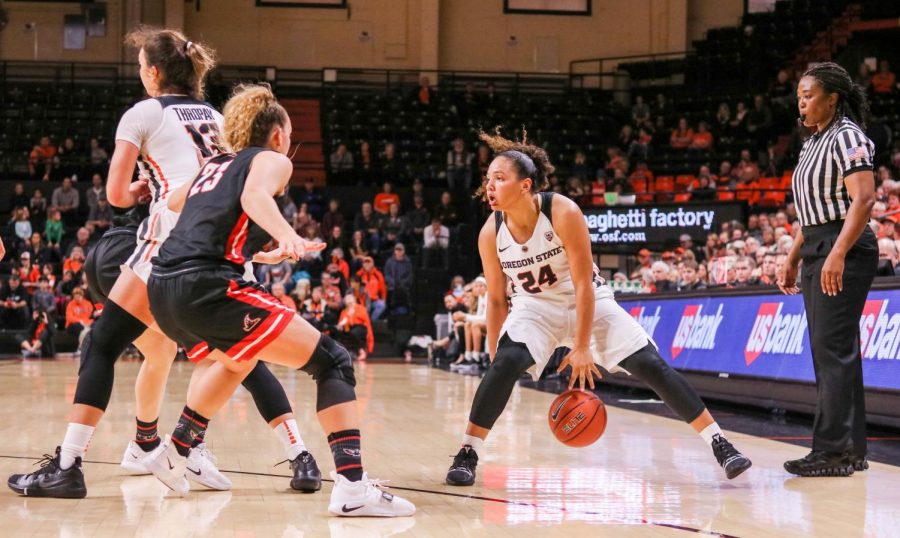 OSU redshirt sophomore guard Destiny Slocum being guarded by NNU forward Erin Jenkins. Slocum tallied up 11 points on the night including a three point shot just before the halftime buzzer.

With less than a week until their season officially begins, OSU Women’s Basketball competed in an exhibition game against the Northwest Nazarene Nighthawks this weekend at Gill Coliseum. The Beavers pulled forward early in the game and never looked back, ending the game with a final score of 95-58.

At the beginning of the first quarter, the Beavers and the Nighthawks battled it out for the lead, with 11 lead changes occurring in the first five minutes. According to sophomore guard Aleah Goodman, it was an issue of defense.

“Defensively, we had a little bit of a rough start at the beginning, but we kind of locked in on that and it helped us a lot,” Goodman said.

By the end of the first quarter, the Beavers captured the lead over the Nighthawks and kept it through the end. In addition to tightening up defense they were aided by a strong offense, achieving 11-0 runs in both the first and second quarters.

Senior guard Katie McWilliams led the Beavers in scoring by putting 17 points during the game. Rueck reflected on McWilliams’ growth as a player.

“Last year, we saw glimpses of it when the light bulb went on for her and she began to understand what she’s capable of and what the team needs,” Rueck said. “She’s the one fourth-year senior, so certainly we need her to produce for us.”

The Beavers shot 50 percent overall from the floor on the night while making  13 three-point shots. In comparison, the Nighthawks ended the game having made 22 out of 67 shots overall.

OSU redshirt sophomore guard Destiny Slocum scored four points in the first quarter. However, She picked it up beginning in the second quarter, hitting a three-point jump shot with three seconds left in the half to help the Beavers stay in the lead.

As the game drew to a close, the gap between the Nighthawks and the Beavers widened. The Beavers won by 37 points, which was their highest lead throughout the game.

In reflection to OSU’s 21 turnovers, Slocum said the Beavers have room for improvement in terms of defense.

“In general, there’s always something we can improve on. For us, just playing better transition defense. Offensively, just finding the open shot and getting a good shot for everyone,” Slocum said.