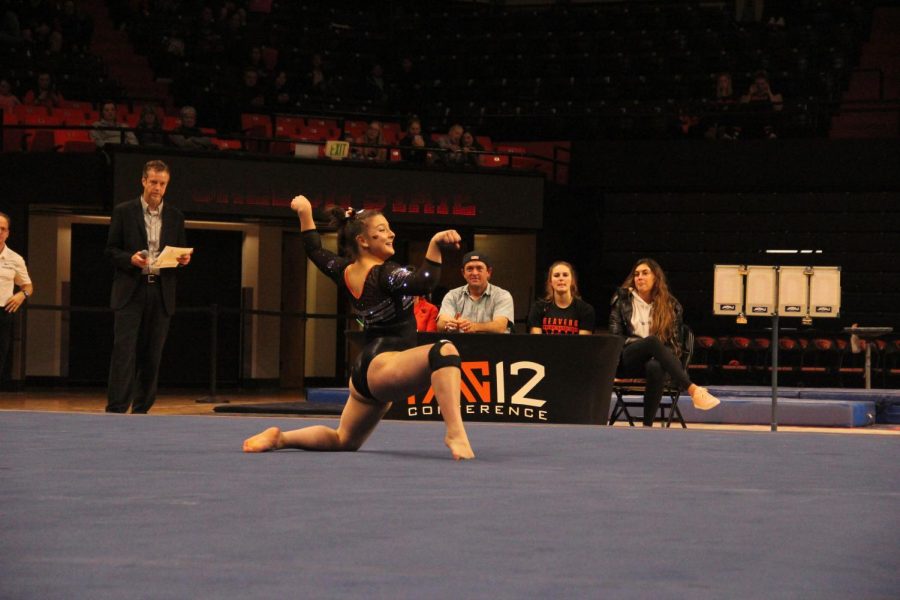 OSU freshman all-around Kristina Peterson performs her floor routine in front of the fans and judges. Her performance was largely inspired by the 'Austin Powers' films.

Oregon State Gymnastics had a friendly competition this evening as they took part in the annual Orange & Black Exhibition match at Gill Coliseum.

With no official scores being taken, the gymnasts had the opportunity to compete against each other in teams of orange and black. In addition, guests such as OSU Volleyball Head Coach Mark Barnard and Women’s Basketball junior guard Kat Tudor, made appearances as judges for the event.

Tanya Chaplin, head coach of OSU Gymnastics, said the match was a good for the inexperienced members of the team to get out and compete in front of the fans at Gill Coliseum.

“It was a great opportunity, there is a lot of promise,” Chaplin said. “I’m happy to see that they’re solid and making the routines that they put out there.”

OSU freshman all-around Kristina Peterson said it was a lot different than club gymnastics, but she felt amazing in the match.

“The team has taken me in so fast. Before I even got here, they were like family to me,” Peterson said. “They were contacting me through out my own club years, so when I got here it was more like a family.”

One highlight of the night was the reveal of Peterson’s floor performance. Inspired by the ‘Austin Powers’ movies, Peterson said the idea was choreographed by another individual.

“He thought I was a lot like Austin Powers, like my bubbly kind of way. I’m really happy with my floor routine,” Peterson said.

Out of all of the gymnasts on the team, this night was especially important to redshirt junior Lacy Dagen. According to Dagen, she would’ve just gotten out of knee surgery at this point of last year.

“It was super fun,” Dagen said. “It’s feeling good, my two legs are feeling good and I’m excited for the season.”