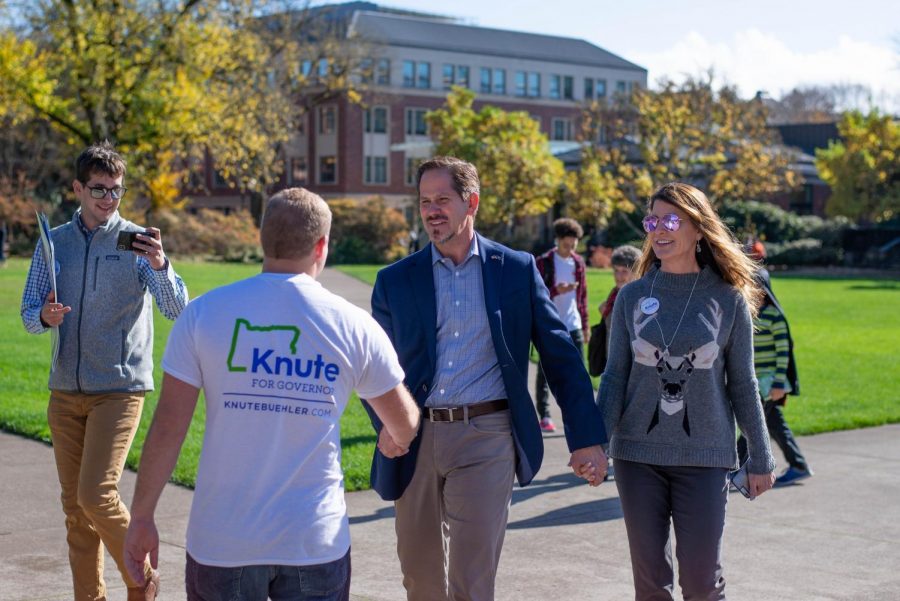 With the midterm election just four days away, the College Republicans at Oregon State University hosted Republican candidate for governor Knute Buehler on Friday afternoon in the Memorial Union Quad.

Buehler is not the only gubernatorial hopeful to visit campus this cycle. Current Oregon Gov. Kate Brown visited campus this past Saturday in a final push before the general election.

Like his Democratic opponent, Buehler posed for photos with a crowd mainly made up of supporters. He said his main goal for the campaign stop was to meet with civically engaged students.

“It is important that the millennial generation votes,” Buehler said. “In traveling across the state I’ve made it a point of this campaign to talk to people from all walks of life.”

Buehler believes he can offer a different kind of message than other Republicans, including President Donald Trump. One issue that separates the two politicians is climate change. Buehler noted his opposition to the Trump administration’s views on the environment during his time in the state legislature, as one of the few Republicans to support a bill moving away from coal power in Oregon. In contrast, the president has been an enthusiastic supporter of continued use of coal.

Another issue on which Buehler diverges from many Republicans is abortion, with the candidate describing himself as pro-choice in a largely pro-life party.

“I’m more than willing to stand up to the party, even my friends, if I think they are wrong,” Buehler said.

This independent streak appeals to Peter Halajian, the president of College Republicans and a moderate who hopes conservatives nationwide will follow Buehler’s lead.

“If we continue to appeal to everybody, even non-affiliated voters, we will survive some of the divisiveness we’re seeing now,” Halajian said.

With nearly 30 students and community members showing up to meet the candidate, Halajian said the event had the highest turnout his organization had seen in recent memory. Despite the perception that younger voters only support liberal politicians, Halajian believes OSU students will not support Brown’s re-election bid.

“I think with Buehler there’s something there for everybody,” Halajian said.

If Buehler is able to defeat Brown, he will be the first Republican governor of Oregon in over 30 years. A poll released Wednesday by the Hoffman Research Group suggests Buehler, who opened the event saying he expects to win the close race, is still behind Brown by three percentage points among likely voters.

One of the major issues Buehler believes can push him over the edge is public education, from primary school performance to the cost of tuition at colleges and universities. The Republican hopes to expand the practice of dual enrollment for high school students to receive college credits for certain classes.

“I would be an independent-minded governor who will solve problems for you no matter who you are, who you love or how you’re registered to vote,” Buehler said.