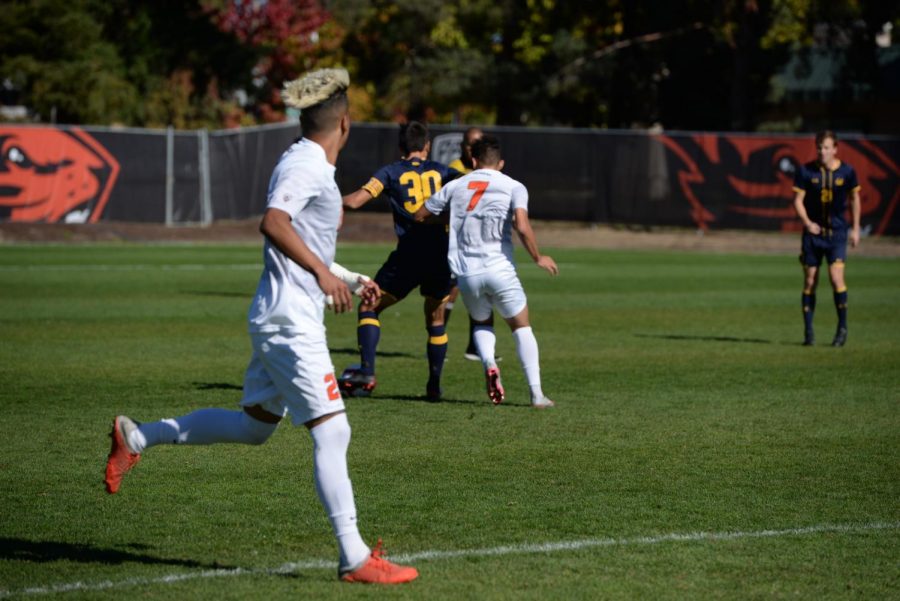 Coming off a win against the Stanford Cardinal Thursday, the Oregon State Beavers (5-4-2) are heading into their thirteenth game of the season against the California Golden Bears (5-5-2).

Pedra takes a shot on goal from the far right of the field, misses.

Churchill takes misses a shot on goal from the far right.

Beavers senior midfielder Hassani Dotson dribbles up the field past four defenders and takes a shot on goal. The ball bounces off the right post, returning back into the play. Cal keeper Noah Texter successfully stops the ball, ending the play.

After many passes back and forth in the goalie box, Beavers freshman midfielder Albert Pedra takes a missed shot on goal, sending it high over the net.

With 10 seconds left in the half, Dotson takes a final shot on goal. Cal keeper Texter is able to stop the ball.

During the first half, Cal shot on goal a total of three times, one successful. Cal senior midfielder Shinya Kadono took the only successful unassisted shot from inside the goalie box in the fourth minute.

The Beavers had a total of four shots on goal, however were unable to score. Two of the shots came from senior midfielder Hassani Dotson. Freshman forward Gloire Amanda had one unsuccessful shot on goal, and freshman midfielder Albert Pedra took the final missed shot in th3 43rd minute.

Pedra takes an unsuccessful shot on goal, sending it wide right of the net.

Pedra takes another shot, high over the defense. Texter easily catches the ball and returns it into play.

Cal freshman forward Alonzo Del Mundo shoots from the far left, arcing the ball wide past the goal. OSU defense is able to recover the ball, sending it back up the field.

Beavers unsuccessfully try to penetrate the Cal defense. After multiple passes back and forth between Pedra and freshman defender Alex Cover, the ball is sent back out of the goalie box and a shot is taken on goal, sent high over the net.

Pedra takes an sliding shot on goal inside the goalie box, which is barely deflected by Texter. The shot is the closest to being successful yet taken during the game.

After a collision, the clock is stopped for an injury of Texter. Cal senior midfielder comes on to replace Davlia, while  Beavers Anthony Atilola and Adrian Crespo replace Cover and Pedra.

Play resumes and Beavers senior defender Adrian Crespo has a breakaway, dribbling up the east side of the field. He takes a shot on goal just outside of the goalie box, but sends it high, roughly 10 feet above the net.

After an unsuccessful shot on goal, Cal sophomore forward Tommy Williamson subs on for Del Mundo.

Beavers freshman midfielder Carlos Moliner dribbles up the middle of the field past two defenders and takes a shot, sending the ball wide left of the net.

Yellow card called on Cal junior forward Simon Lekressner. The penalty kick is taken by the Beavers and is stopped by Cal defense.

Lekressner gets a breakaway, dribbling up the west side of the field. He shoots on goal, sending it high over the net.

A Beaver corner kick sends the ball into the goalie box. After Cal defense headers the ball out, Beavers freshman midfielder Sofiane Djeffal recovers the ball and passes it to Amanda, who scores from the right side of the net. The game is now tied at 1-1.

Cal freshman midfielder Taylor Davila comes on for senior midfielder Halil Beqaj. Cal takes a corner kick from the right side of the net. The ball is sent wide and Beaver defense is able to recover it and send it up the field back into play.

Del Mundo is back on to replace Fernandez.

Senior forward Don Tchilao attempts to maneuver past two defenders, but the ball is kicked out of bounds by Cal. Beavers take a corner kick and Cal defense is able to recover the ball.

The corner kick drops into the middle of the penalty box, but is successfully headered out of bounds by Cal defense. The second corner kick is sent wide out of bounds. Cal freshman forward Stefan Jung substitutes for Ebstein.

Crespo passes to the center of the field to Djeffal, who scores from the penalty box. Beavers now lead with 2 goals and Cal follows with 1 with three minutes of regular play remaining in the game.

Kadono headers the ball from the center of the goalie box straight to Fernandez, who is able to catch the ball and return it to play.