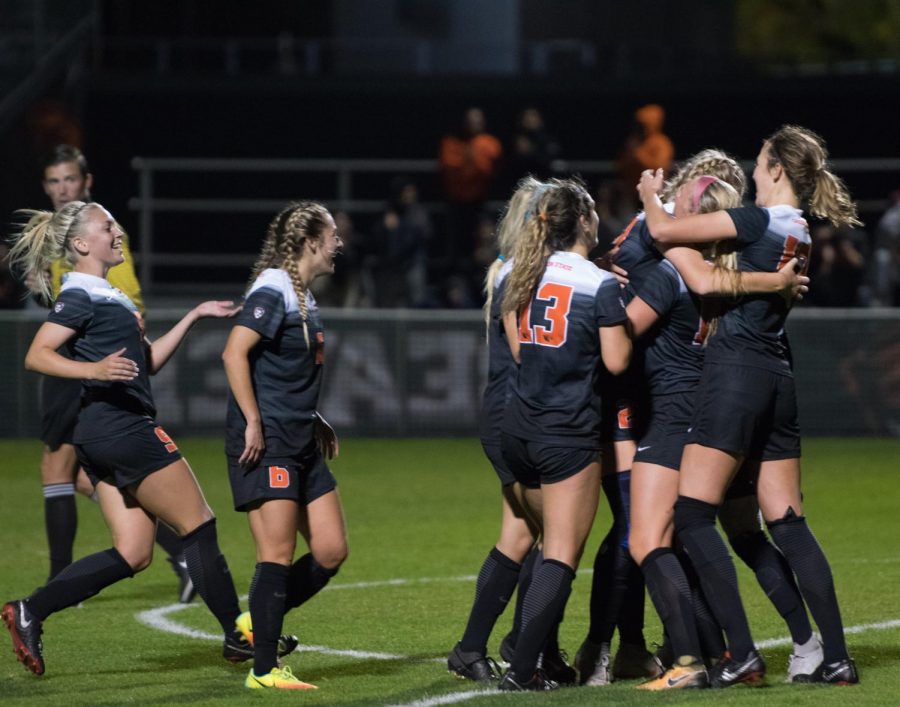 Oregon State Women’s Soccer won their first Pac-12 game tonight at their home stadium with a 2-1 score over the California Golden Bears. This being their second win of the season, the Beavers are now 2-10-1 overall.

With both teams looking for their first conference win, California spent most of the game on Oregon State’s side of the field, taking a total of 24 shots at the goal compared to OSU’s 12 on the night.

The game came down to a tough OSU defense, which succeeded in remaining calm during tense situations around their goal with redshirt-junior goalkeeper Lindsay Lamont who saved seven shots on her net.

Senior midfielder Allison Pantuso was the first to put a point on the board with her penalty kick over the left side of the Golden Bears goalie. In the game, Pantuso played while wielding a cast over her right arm and four fingers.

“I’ve been playing center back for most of the season, so it was really nice to take that penalty kick,” Pantuso said. “It wasn’t that bad playing with the cast. It was hard at first, but just like anything else I got used to it.”

Twenty minutes after the first half, Senior midfielder Sydney Studer made a goal from just outside the penalty box through oncoming defenders to bring the score to 2-1.

“I always try to make the head miss as best I can and she ended up getting in front of it, but dropped it so I said, ‘I’m not going to stop’, so I went in surprisingly and wow my mind was blown,” Studer said.

According to Studer and Pantuso, they had played some games in the last few weeks that they could have won which made tonight’s win that much more sweet for the team.

“When we finally get a win, our strengths come together and we all fight for each other,” Studer said.

“It feels great, these girls have been working so hard. I’m just really happy that we got the result tonight,” Rhode said. “They fought extremely hard and it was just a really resilient effort.”

According to Rhode, the team is going to continue working on their third quarter-game and open up more opportunities for the team to make plays.