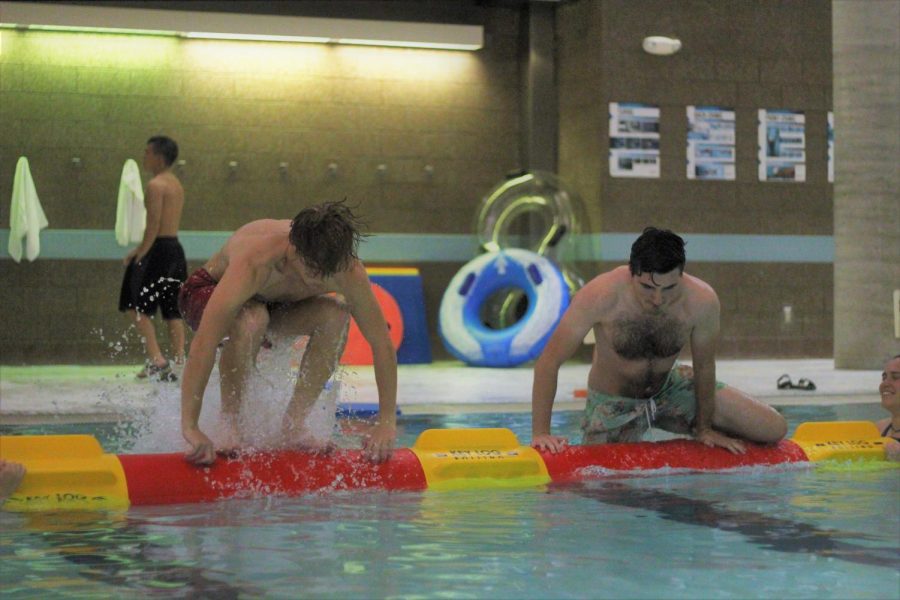 On a normal Tuesday night, Dixon pool is usually occupied by a few swimmers working out, some hot-tubbers and a couple of people swimming for leisure. This last Tuesday night, however, the normal crowd was joined by a large waterproof log and a group of students laughing loudly while falling off of it.

The Department of Recreational Sports will be providing students with a new opportunity to try log rolling in the Dixon Recreation Center pool every Tuesday of the term.

According to the Log Rolling page on the Oregon State University website, the sessions will teach participants to get on top of the log, take steps forward and backward, and compete against others by standing on the same log and trying to roll the other person off.

Brian Hustoles, the marketing and communications manager for the department, said that the choice to host the log rolling program felt like a natural decision for the campus area.

“Rec Sports adopted the program thinking it would be a fun campus fit, given the region’s rich heritage of timber sports and appetite for unique physical activities,” Hustoles said via email. “The Forestry Club provides outdoor log rolling at Peavy Arboretum, and Rec Sports provides an on-campus, indoor option.”

According to Hustoles, the sessions are overseen by Rec Sports lifeguards, who introduce students to the sport by teaching them the basics and keeping them safe.

Brendan Deal, a fourth-year student at OSU, was welcomed into the sport at the session last Tuesday.

“I mostly just got in the pool to try it out,” Deal said via email. “The difficulty was getting onto it and remaining stable, the quicker you get on the easier it was, it seems. It was fun, and I feel like, with some practic,e when you actually get good it could be a fun competitive thing.”

Justin Gordon, the aquatics coordinator for the department, said that the future of the program is definite.

“We have talked about the potential to make a league or a sport program or an intramural program,” Gordon said via email. “Conversations are ongoing within these areas.”

According to Gordon, the aquatics program is pursuing new programs that will draw people to the pool.

“We would like to add what people are seeing as an exciting and usable program that would bring them to the pool and create an interest in aquatics,” Gordon said via email. “We are always looking to add new programs that are up and coming trends. I will be attending a conference in February to look for exactly that.”

The sessions use Key Logs, a newer type of synthetic log created with the sport in mind. According to the Key Log website, their products are made from polyethylene, a material used in other water sports equipment such as canoes or kayaks, which prevents the log from suffering prolonged water damage.

As posted on the Key Log website, traditional logs can weigh somewhere around 500 pounds which limits the accessibility of the sport, as the logs would frequently be hard to carry around. To allow for easy transport, Key Logs weigh 65 pounds and are filled with water at the event location to increase the weight.

The Key Logs used by the Department of Recreational Sports in their rolling sessions come with yellow trainers that provide extra stability to the log by increasing the resistance and limiting the speed that the log can be spun. According to the website, these trainers allow the sport to be more accessible to beginners by lowering the learning curve to an introductory level.