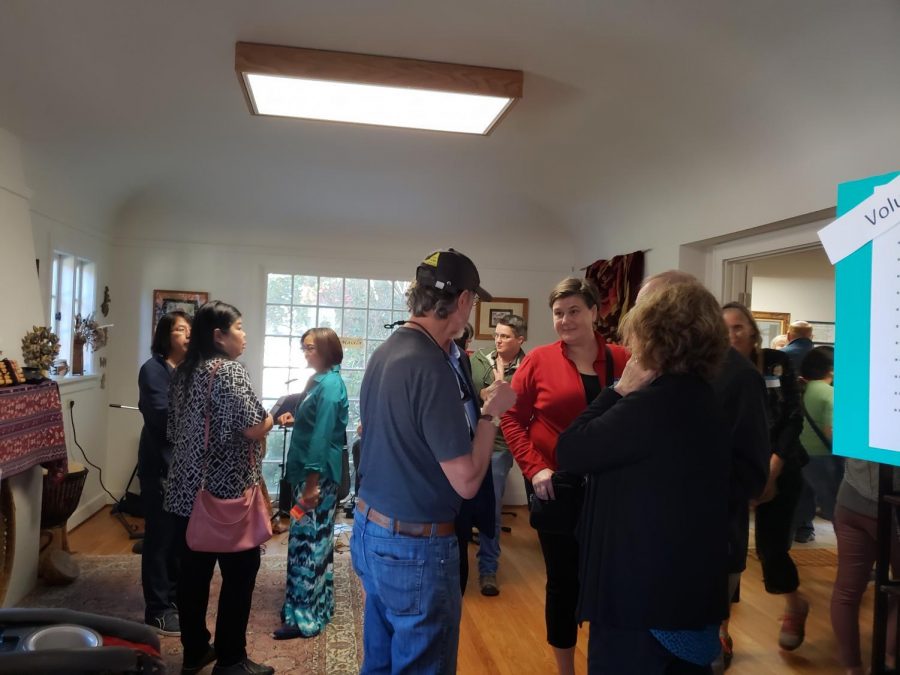 Outside the small house on Jackson Avenue, all is calm. Inside is another story. Entering the new home of the Corvallis Multicultural Literacy Center on Oct. 13, the day of its grand reopening celebration, is like walking into another world. The house is filled to the brim with guests, who laugh and talk over the music in a blur of different languages.

The organization moved to 2638 NW Jackson Ave. nearly two months ago. Its previous location, leased from Oregon State University for over a decade, was demolished to make space for new student housing. According to Interim Director Caitlin Sullivan, the main goal of the CMLC is to provide a place for people to build community, especially for those who have come to Corvallis from different countries.

“It’s really about making connections – having a space for people to feel welcome and comfortable where they can make connections in the community,” Sullivan said.

The new house on Jackson Avenue is also leased from OSU, at the same rate of $1 a month that the CMLC paid for its previous location. The university contributed the funds for all the renovations needed at the new location.

Sullivan had her concerns when the organization first learned that they would need to move.

“Would people still be able to find us? Would they still want to come to the center?” Sullivan recalled thinking.

Evidently visitors were still able to find the Literacy Center for its grand reopening. The crowded celebration began outside, with a ceremonial ribbon cutting by Mayor Biff Traber. Jody Einerson, granddaughter of the house’s original occupants, was also present at the ceremony. The house has been named the Einerson House by OSU’s naming committee, honoring the legacy of Einerson’s immigrant grandparents.

As guests packed into the small 1920s house, they were greeted with live music and platters of food.

Although the Einerson House today is a bright, welcoming place for guests, Sullivan said that it’s a far cry from what it was when the CMLC first moved in. She described the house before renovation as a dark, depressing space.

Now, newly installed French doors open up and brighten the house. What was previously a garage has been converted into a classroom area where visitors can take language classes and study for the U.S. citizenship test.

According to Sullivan, the center has helped 45 people to successfully pass the exam and become citizens. These classes are taught by around 20 volunteers.

Volunteers are an essential part of the CMLC. They help out with everything, from teaching cooking classes to providing on-site childcare for parents who want to take a class at the Literacy Center. Volunteers even helped to unpack and organize right after the move to the Einerson House, a time when Sullivan says the entire house was filled with boxes floor to ceiling.

The enthusiasm of volunteers can be seen in the huge array of foods at the reopening celebration. Vayomi Wickramanayake, a CMLC board member, said that the amount of people wanting to bring food was overwhelming.

Food is undoubtedly an important part of the Literacy Center’s mission to create cultural connections. From Peruvian causitas to horchata, all the refreshments at the celebration represented the cuisine of a different culture.

Board member Mamta Chowdhury first began visiting the CMLC when she moved to Corvallis and was unsure of how to connect with a culture that was different than she was used to.

“When people come to a new place and an international community, there is an inherent fear. The fear of, how do I make friends? How do I reach out to the community?” Chowdhury recalled.

According to Chowdhury, visiting the Literacy Center helped her to connect with other people in the area.

“At CMLC, you can make friends, you meet people from local community and all over. So you start feeling the sense of belonging and that is huge,” Chowdhury said.

Sullivan and other CMLC staff and volunteers use a particular word to describe the connections people make at the Literacy Center.