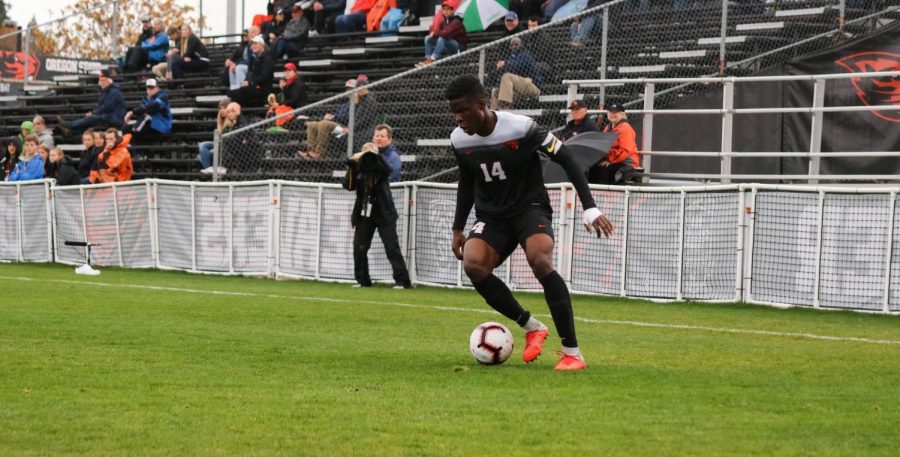 Senior Forward Don Tchilao dribbles the ball as he looks for a teammate beyond the opponents side of the field.

After an amazing senior night, the Beavers defeated the UCLA Bruins in a seven-goal game. Seniors Don Tchilao and Hassani Dotson both scored goals on their last home Pac-12 game as Beavers. Oregon State’s next game will be against the Washington Huskies in Seattle on Nov. 9.

Oregon State deflected the ball out of bounds resulting in a UCLA corner.

Foul on UCLA five yards outside of the box, resulting in a free kick shot attempt from freshman midfielder Sofiane Djeffal that sailed just over the bar.

OSU corner kick, which was headed at the goal for a shot attempt by senior forward Don Tchilao, saved by UCLA freshman keeper Justin Garces.

Shot attempt from Asiedu is high over the crossbar.

Shot on goal by UCLA defender Erik Holt, save made by OSU freshman keeper Adrian Fernandez.

Goal from Asiedu off a pass from Iloski.

A header from OSU forward Gloire Amanda is sent just over the crossbar.

After a UCLA foul,  Djeffal passed a free kick to Senior Hassani Dotson who attempted a shot, but it was saved by Justin Garces, the UCLA keeper.

After assists down field from both Senior forward Don Tchilao and Junior midfielder Anthony Atilola,  Amanda headed a goal in the back of the net to level things at 1-1.

Tchiloa attempted a shot on goal that went over the bar after the pass from  Amanda.

A foul on freshman midfielder Carlos Molinar, results in a UCLA free kick.

Ilaski scores on a free kick given after the Molinar foul.

Assists from Tchilao and Amanda lead to a two-touch goal from freshman midfielder Sofiane Djeffal. Beavers tie it up 2-2.

Shot attempt from Djeffal goes over the crossbar for a UCLA goal kick.

Off an assist from Djeffal, Dotson put the ball away to put the Beavers up 3-2.

An OSU deflection results in a UCLA corner.

first team to score in either of the overtime halves is named the winner.

Tchilao nails the game winner to beat UCLA in extra-time.