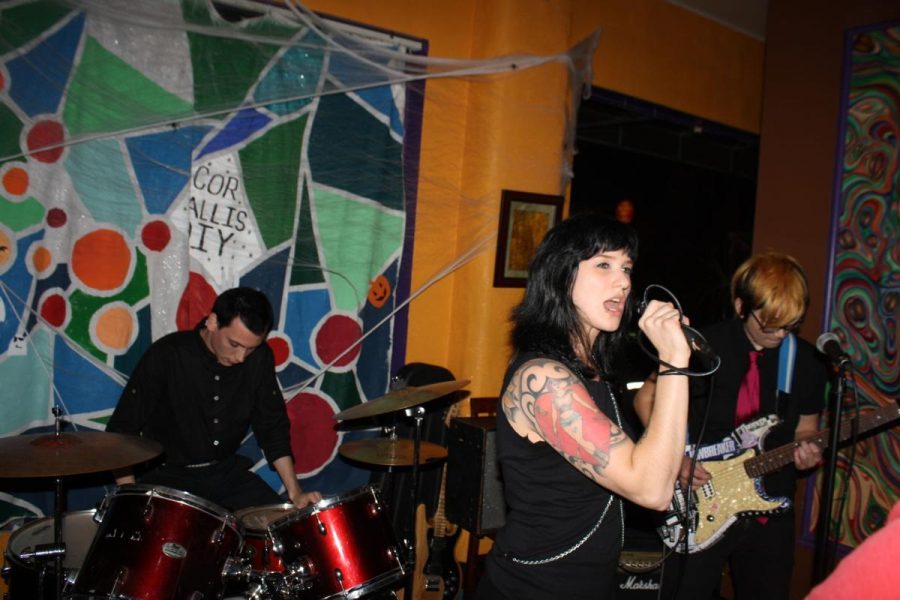 (L to R) Wes Walker, Caitlin Garets, and Indiana Laub perform as AFI at the 2016 Corvallis DIY Halloween Cover show. Garets and Laub will be returning to cover The Misfits this year.

Ghosts and ghouls won’t be the only things going bump in the night this Halloween weekend.

Community organizers, Indiana Laub and Caitlin Garets, look forward to the show being an all-ages alternative for those looking to dress up and have fun without alcohol. The two currently book shows under the name Bitter Half Booking, and have been booking shows in the DIY scene for years.

“The Halloween show is fun because it’s so familiar and nostalgic—it’s people you know playing songs you know, and it creates an atmosphere that reminds people how much we all have in common,” Garets said. “It’s a participatory community bonding experience. It’s just a really inclusive, wholesome event.”

One returning performer to the event is Macks Johanesen, the lead guitarist and vocalist for local band The Shifts.

“Playing Nirvana songs, I just feel like I’m 12 years old,” Johanesen said. “Except this time, instead of being 12, we’re semi-experienced, 20-something musicians who can do the songs really well—coming back just feels great.”

Johanesen has played DIY’s Halloween show every year since its inception in 2016. The Shifts frontman says he’s looking forward to playing with fellow musicians in the community.

“When you see bands a lot they play their sets over and over, but with Halloween it’s a one-off,” Johanesen said. “You’ll never see them do this ever again.”

While he’s excited to play the show himself, Johanesen said he is just as eager to see all of the other performers.

“The one I’m really looking forward to is Dreamt, who’s covering Mitski,” Johanesen said. “To see a very contemporary artist being covered, I think it’s going to be really cool.”

An experienced guitarist himself, Gerken is glad this show can be a creative outlet for local bands.

“This show gives artists an opportunity to do something a little different. I like this show’s set up because it really lets you dig into an artist’s work and express what you like about it,” Gerken said. “Plus it’s fun as heck.”

The third annual Halloween show is a free event, with donations accepted toward Sinking City Pop Fest 2019, an all-ages DIY punk music festival in Corvallis. More information can be found on the Corvallis DIY Facebook event.