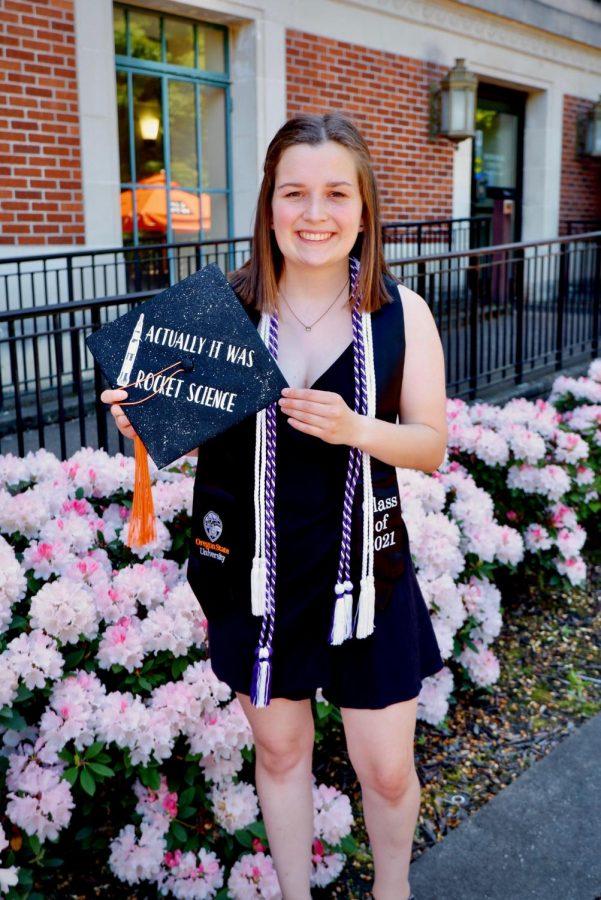 Kristen Travers is graduating with a degree in mechanical engineering from OSU, minoring in aerospace engineering. In her freshman year, Travers became involved in the Undergraduate Research, Scholarship and the Arts Engage program, a program that provides opportunities for first and second-year students to pursue research or creative activity under the guidance of an OSU faculty mentor.

Her faculty mentor through the URSA Engage program was Dr. Brian Fronk, who runs a thermal energy systems and transport laboratory.

“I was interested in working with Dr. Brian Fronk because he works with energy-efficient systems, which was what I was interested in and it was a good way for me to get my foot in the door,” Travers said. “So I ended up working for him from winter to spring term of my freshman year on solar thermal panels.”

Travers then interned for Intel that same summer of 2018, through these experiences at Fronk’s lab. Currently, she has secured a position with Boeing as a systems engineer.

Travers said one misconception about Boeing is that it builds an entire plane, but according to Travers, Boeing actually works with several different manufacturers to purchase all the necessary parts to build the plane.

As a systems engineer, Travers will see the coordination of projects through from beginning to end.

“My group specifically works on model- based systems engineering, so retroactively, going back and seeing how we could have avoided failures with the airplanes,” Travers said. “I’m hoping to move to something more propulsion-based at some point, though, because that’s closer to what I’m interested in.”

Mahal Miles is set to graduate with a major in economics within the College of Liberal Arts and holds a current cumulative GPA of 3.91.

Being in the Economics Program at OSU, Miles said the program has been very kind, inclusive and nurturing of her academic and professional aspirations. Additionally, clubs and activities involving economics have been highlights to her OSU experience.

“My work at the Office of Advocacy has [also] been a really cool way to meet people in [Associated Students of OSU] and connect with local community organizers as well,” Miles said. “I also am very appreciative for the Center of Humanities; I had an internship with them a couple summers ago and that also was a great place to find community and conduct community outreach essential to my research.”

Miles hopes to see more diversity in the field of economics in the future, particularly due to the fact that the field has among the lowest rates of underrepresented minorities and women.

“I hope to see more women in econ mentorship,” Miles said. “Doctor Elizabeth Schroeder and Camille Nelson have been incredible mentors, [and are among the few women in the economics department]. But of course, they’re asked to do a lot, so if there were more women hired on, or if alumni were compensated to serve as mentors, I think that would be really valuable.”

Kristina Tucker graduated with a 3.98 GPA through OSU’s Ecampus, majoring in psychology with minors in philosophy and human development and family sciences. She will be continuing her education through graduate school, having been accepted into an applied psychology Ph.D. program.

With her degrees and acceptance into grad school, Tucker hopes that she can become a professor and contribute meaningful psychological research to the psychology community and the world.

“I hope that I can find the one thing or many things that contribute to resilience after suffering a trauma, so that more of us who have dealt with earth-shattering pain can grow through it and overcome it, instead of remaining stuck,” Tucker said via email.

“If I failed, I would be failing them,” Tucker said. “While there are many students who do not have children, I would say find that one thing that you know you would do anything for and never forget about it as you progress through your degree. Hold onto your ‘why’ and never let go. That is what I had to do and it made every moment, every assignment, every class, a crucial aspect of my reality that I was fully present for because I knew that it contributed to the bigger picture.