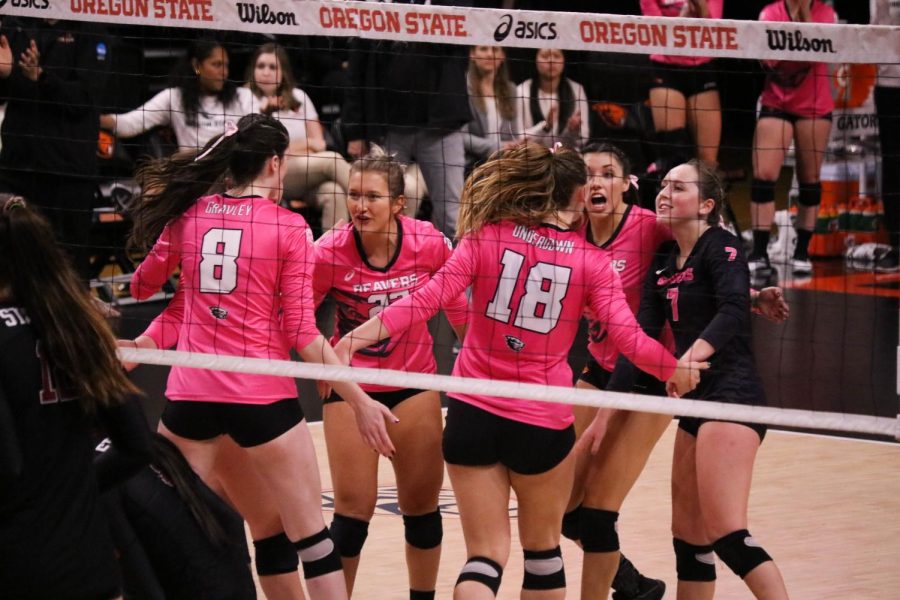 Senior middle blocker Maddie Gravley (LEFT) and junior outside hitter Amy Undertown (RIGHT) celebrate with their teammates after going up on Stanford in the fourth set.

After three consecutive losses on the road, OSU Volleyball (10-10) returns to Gill Coliseum tonight to try to earn their first Pac-12 win of the season against the No. 2 Stanford Cardinal (16-1).

Beavers pull ahead in the beginning the first set, but Stanford keeps it close.

Stanford answers back and ties it up.

Sophomore outside hitter Haylie Bennett gets a key block in the game, but Stanford pulls the point with a kill.

Oregon State takes back the lead with a huge kill from senior middle blocker Maddy Gravely.

Another Oregon State timeout after a far-out save from Maddie Goings gets struck down by Stanford’s Tami Alade.

Stanford uses their timeout after a kill from OSU’s outside hitter Amy Undertown earns the Beavers back the lead.

Oregon State takes the first set with a failed block attempt from the Stanford front court.

After Stanford established a lead in the beginning of the 2nd set, OSU calls another timeout.

Goings gets a kill and aids OSU in regaining some momentum.

Stanford ends another OSU play with their 10th block.

Beaver’s middle blocker Lindsey Schell gets her 2nd kill of the night in an attempt to turn the tide of the set.

Stanford nears winning the set as Alade ends another long rally with a kill.

As the set ends, Stanford has had another 14 kills, while OSU has added 7 in the game thus far. Both teams have tallied up a significant numbers of attacks with Stanford at 72 and OSU trailing with 71. However, Stanford proves to be more successful with their attempts having developed a hit percentage of 0.292.

Thanks to a quick save by Stanford’s outside hitter McKenzie Fidelak, fellow teammate Kathryn Plummer gets the chance to start a lead for Stanford in the 3rd set with her 11th kill on the night.

Stanford outside hitter Meghan McClure earns the Cardinal their 8th serving error of the night, allowing the beavers to tie up the score.

Underdown earns her 9th kill of the game and keeps Stanford from gaining a lead over OSU.

Both teams continue to rally points, but OSU setter Maddie Sheehan receives another kill and restores the tie for the beavers.

After her third block in the same rally, Alade helps the Stanford team earn a small lead.

After Cardinal setter Jenna Gray grows the lead for Stanford with her first kill, OSU calls a timeout.

With a kill by Alade, Stanford begins to pull away as the set reaches close to its end.

An attacking error by Goings secures the 2nd set for Stanford. While OSU may lead Stanford in attacks, amassing 23 attack errors and allowing Stanford to gain six more blocks in this set have hindered their ability to keep up.

After another kill by Underdown, OSU earns a lead and gains momentum early in the set.

Though Stanford has kept it close, an 8th kill by Goings keeps OSU safely in the lead.

As Stanford begins to gain momentum, their 18th total block in the match brings the score to a tie.

After two kills by Goings and an attacking error by McClure, OSU breaks the tie and secure the lead once again.

Despite a 16th kill by Plummer, OSU outside hitter Hailey Bennett answers back with her own kill and keeps the Beavers’ lead intact.

Underdown increases the lead for her team by earning two consecutive kills.

After a kill from Stanford’s outside hitter Audriana Fitzmorris, the Cardinal bring the score to a tie.

After a service error by Sheehan, Stanford continues to make OSU work for it if they want to win this set and stay in the game.

A 12th kill by Goings allows OSU to gain a lead as the set approaches the 25 point limit.

An impressive save by OSU defensive specialist Grace Massey allows the rally to continue while Gravely earns Oregon State another point with her 3rd block.