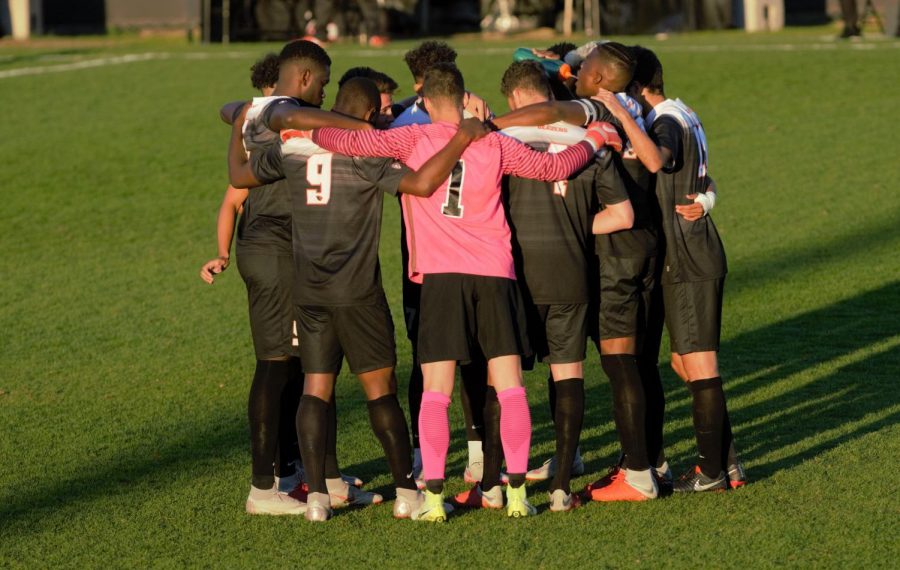 Oregon State Men’s Soccer upset the Pac-12 No. 1-ranked Stanford Cardinal and returned this weekend for a 2-1 win against the California Golden Bears at Paul Lorenz Field.

Playing at home, the Beavers saw an early goal against the Cardinal from freshman forward Glorie Amanda in the 22nd minute and were able to keep the 1-0 score through the end of the game.

The Cardinal took 10 unsuccessful shots on goal, six of which were saved by freshman Beavers keeper Adrian Fernandez.

“I hope that it has led to more belief. This team is special and I am really proud and honored to be a part of coaching it,” Boss said. “These young men should believe in themselves because they are special.”

Sunday’s match picked up quick, with a goal from California senior midfielder Shinya Kadono in the fourth minute.

It wasn’t until the last 15 minutes of the match that OSU was able to successfully score. In the 76th minute, Beavers freshman midfielder Sofiane Djeffal recovered the ball from a corner kick and passed it to Amanda, who leveled the game 1-1.

Djeffal got his own chance to score 10 minutes later in the 87th minute from freshman defender Adrian Crespo’s assist. The Beavers led 2-1 with four minutes left and were able to hold the California offense for the rest of the game.

Amanda attributes the success to overall attitude, despite a rocky start with the quick California goal in the fourth minute.

“I think it was just the attitude from the team. Obviously it went down the first half but we kept fighting and fighting,” Amanda said. “I think our attitude and resiliency not to give up showed today.”

“Football is a game of imperfections—it’s less about the events that happen and more how we deal with it,” Boss said. “I couldn’t be more proud of how these guys bounced back from what could be really easy to just kind of throw in the towel with a start like that.”

Djeffal, who finished the game with five shots on goal, saw a difference between the first and second halves.

“We put more pressure on the team. We were higher on the pitch and this half was for our team,” Djeffal said. “I think that was the most important difference between the halves.”

With their next game against Stanford, Boss is not looking to change much of the Beavers’ style.

“I think that to be able to play a team at home and play them away is a great opportunity to make little adjustments and hopefully go down there with the same intent to win and put together the same game plan that we all feel confident in,” Boss said.