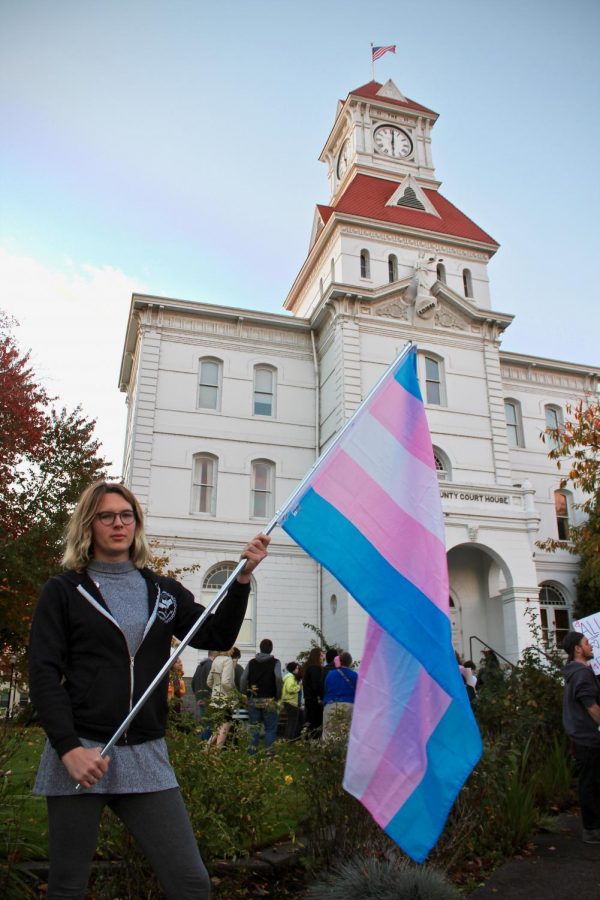 On Monday night, transgender activists and those in solidarity came out to the Benton County Courthouse to protest the Trump administration that plans to implement a policy to define gender at birth, reversing policies instituted during the Obama administration. Christopher Collins, a transgender man said that this plan could be disastrous to the transgender community. The plan could retract health care and certain needs such as medication for those who are in transition, and Collins said that his rights could be taken away if the policy is implemented.

“The [transgender] youth has so much to be scared of,” Collins said.

“As trans people, we face a lot of existential threats in this country right now, and it is really important that we come together and face this situation as our own force, with as much political power we can muster in a community together,” Kreisman said.

Kreisman is currently running in the Corvallis midterms for city council.

At one point during the protest, a man in a ‘Make America Great Again’ hat began to walk towards the protest. The protesters began to attempt to keep him away from the speakers and the group in front of the courthouse blocked him with signs and yelled into his face. The Trump supporter kept his camera out as protesters and supporters circled him.

According to Forston, this man had come out the past few days during the smaller protests. The Trump supporter would not comment on why he was there day after day, or if he came to the protest to incite conflict.

Forston said the protest turnout was overwhelming. “I chose the courthouse because every instance of injustice has started with not having the ability to be heard, and if we are going to be heard on a level to make people care, we need to start at the political level,” Forston said.

Forston has organized many events and always thinks that if protesters bring their family and those that care, many more will come.

“Each time we organize, I am so pleased the community shows up and supports us,” Forston said.