Juneteenth ‘is American history,’ and work should ‘not stop at symbolic victories’ 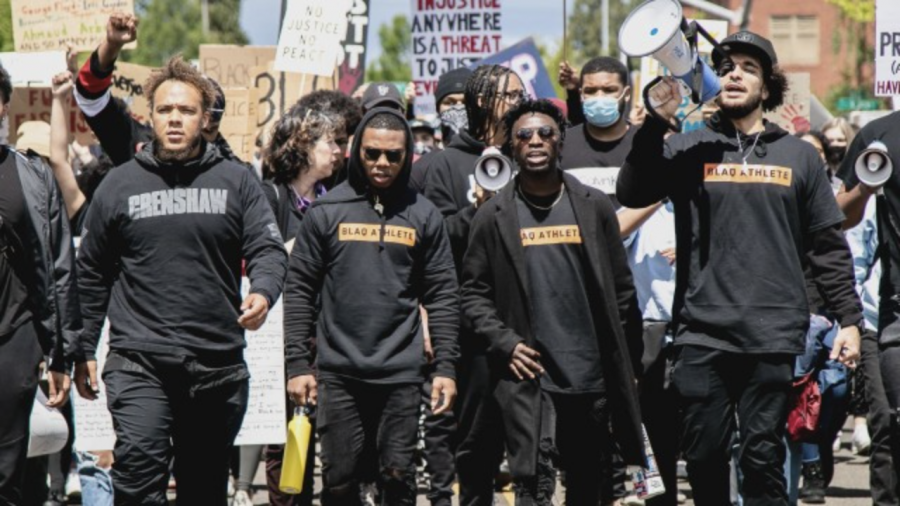 A group of Oregon State University student-athletes lead a protest for Black Lives Matter on June 7, 2020. Although Juneteenth is now a recognized holiday at OSU and federally in the United States, the institution still has significant work to do for Black liberation, according to Madison Ellsworth, a fourth-year business management student and co-president of DamChange.

Oregon State University recognized Juneteenth as a university holiday for the first time this year, and though this is a milestone, Black community members highlight that there is much more work to be done.

The holiday, which celebrates the true date of when enslaved Black people were freed on June 19, 1865, is also beginning to see recognition statewide and nationally.

Madison Ellsworth is a fourth-year business management student and co-president of DamChange, a student-athlete-led organization that focuses on using sports to encourage awareness, education and understanding about systemic racism.

Ellsworth said she is excited about Juneteenth being recognized at OSU, but she is also wary that it’s a performative measure.

“We want to give Oregon State the benefit of the doubt because we’re happy,” Ellsworth said. “But at the same time, there’s a lot of other things that need to be done to back up what Juneteenth is about.”

At the national level, Ellsworth said she feels like it is performative, given the current state of the country.

“There’s just so many systemic issues within our country that people are so close-minded towards, and [they] don’t really want to open up and look at and try to fix to improve the country for Black Americans,” Ellsworth said. “And so, by them just making Juneteenth a holiday, it just seems like a slap in the face, and they’re doing what they consider the bare minimum for us.”

Nya Buckner,  fourth-year biochemistry and molecular biology student and co-president of DamChange, said OSU recognizing Juneteenth is a step in the right direction.

“This holiday means so much to the Black community, and it should mean a lot to all Americans; it deserves to be learned about and celebrated, not only at this institution, but statewide and nationwide,” Buckner said in an email.

However, Buckner also said the work should “not stop at symbolic victories.” Similar to Ellsworth, she believes OSU needs to back up the recognition with more action by supporting and uplifting Black voices on campus and in the local community.

Director of the OSU Lonnie B. Harris Black Cultural Center Terrance Harris agreed that recognizing Juneteenth is a good step for OSU. However, he expressed worries that people will treat the holiday as just another day off.

“I think people need to understand the importance of the true Independence Day and Black liberation, especially for Black folks here,” Harris explained. “Free-ish, as we would say, because you know, there are still things that tried to keep us in bondage, or held down, but we are resilient people. And I think it’s important for people to understand the truth.”

Harris personally doesn’t celebrate the Fourth of July, for many reasons, but also because on the day the holiday commemorates, July 4, 1776, Black people were still enslaved.

Buckner and Harris both said celebrating Juneteenth is important, because it is American history.

“Black history is American history, regardless if people want to accept that or not,” Harris said. “And there are a lot of things that are within history that people don’t want to address or to  have conversations about. And in order for you to grow, you have to learn from your mistakes, and move past those and do better.”

Buckner explained similarly, “Celebrating this holiday means celebrating and embracing the Black experience in the United States. So many people do not know what Juneteenth is or why it’s important; by recognizing and celebrating this day, we pay tribute to and honor the journey our Black ancestors endured.”

Ellsworth said she personally takes the day to reflect on the history of her ancestors and all they had to endure, as well as to be grateful for her background. She also mentioned that she has only begun celebrating Juneteenth in recent years.

“Not every Black American has grown up celebrating it,” Ellsworth pointed out.

For others, Ellsworth said it’s important to use the day to educate oneself and have conversations about Juneteenth. Buckner agreed and added that it’s essential to take the information one learns and consider how they can make a difference with it.

Harris said education is important, as well as attending Juneteenth events. He also stressed not waiting until Juneteenth to learn about Black history and find ways to support Black individuals.

For OSU to continue working toward supporting Black liberation, Ellsworth said increasing the amount of Black faculty at the university is important.

“The biggest concern I have within Oregon State is just increasing the amount of black faculty to make our students feel more welcomed [and] to make our faculty feel more accepted,” Ellsworth said.

Harris had a similar sentiment, saying that the best way to support Black liberation is to better support Black faculty and staff. This not only means pay equity and financial support, but also efforts to recruit more Black faculty, staff and students, as well as not overworking these individuals.

According to Harris, there are currently only about 90 Black faculty members at OSU out of several thousand. As for students, there are about 450 to 500 Black students out of 31,000. Other institutions across the state are not doing much better on this front, Harris said

Harris expressed that there is a need for people and institutions to honor and accept Black people, recognize their achievements, push for upward mobility in the workplace and support events concerning Black liberation.

Like Ellsworth and Harris, Buckner stressed a need for OSU to bring more Black voices in.

“This can be done by increasing representation on all levels: students, professors, faculty, administration, coaches, etc.,” Buckner said. “The fight for Black liberation must be led by Black people, but we must be given the space to do so.”

Harris said despite what others contribute and do to support them, Black individuals are going to continue working toward Black liberation.

“We’re going to do it ourselves, because this is who we are as a people; we’re going to honor and celebrate us,” Harris said.

Recognition of Juneteenth was signed into federal law by President Joe Biden on June 17. The state of Oregon will begin recognizing the holiday in 2022. OSU officially recognized Juneteenth on Friday, June 18 this year, since the holiday fell on a Saturday.

The Corvallis/Albany branch of the NAACP was reached out to for comment but did not respond in time for publication.