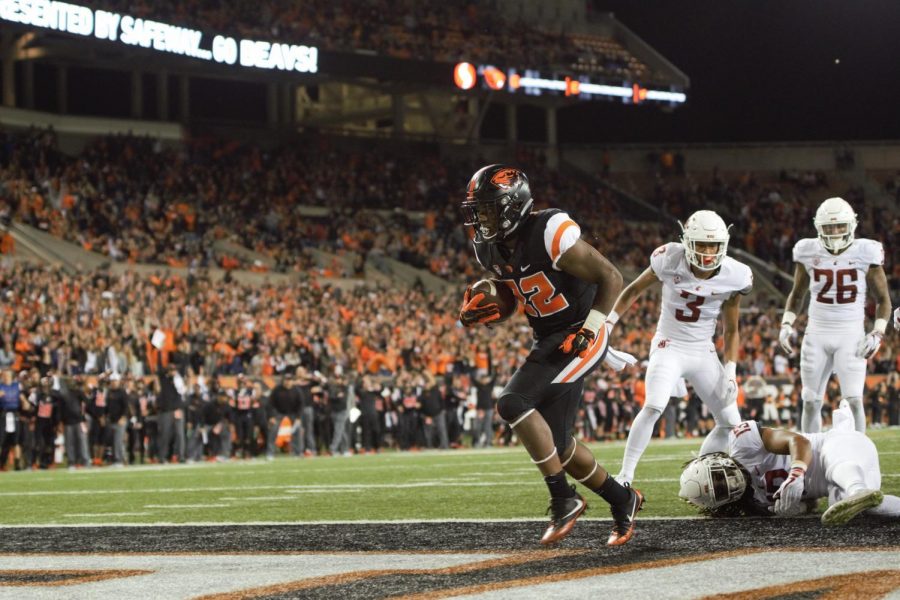 The Oregon State Beavers (1-4) are looking for their first Pac-12 Conference win since 2016 as they take on the Washington State Cougars (4-1). OSU running back Jermar Jefferson enters this matchup as the leading rusher in the Pac-12 despite the poor overall team record. Washington State is coming in with the third best total offense in the Pac-12 led by quarterback Gardner Minshew who leads the Pac-12 in passing yards and second in passing touchdowns.

First play of the game, Minshew throws a 42-yard pass to the running back in the flat. He followed that with a completion to Easop Winston to get to the six yard line. Minshew caps off the drive with a completion in the endzone to wide receiver Renard Bell for six yard touchdown pass. The three play drive puts the Cougars on the board with only a 1:16 drive.

Coming immediately off the special teams collapse from the previous drive, the Beavers marched down the field making third down conversions as running back Jermar Jefferson constantly broke tackles. Quarterback Conor Blount, on a key third down in Cougar territory, got sacked for a four-yard loss. But in the following play, Blount found Bradford downfield to continue the drive.

Later in the drive, with the Beavers facing another third down in the red zone, Blount scrambled as the pocket collapsed around him. He came up shy of the first down. Faced with another fourth down, Blount kept the ball for a QB sneak to pick up the first down to keep the drive alive.

Jefferson punctuated the drive with a six-yard rushing touchdown as he punched through the Cougar defensive line.

On the ensuing kickoff, Oregon State went for a surprise onside kick but failed to convert as the ball bounced out of bounds resulting in a penalty.

Beavers force the Cougars to punt as the OSU defense continued to get pressure on Minshew.

Jefferson brings the crowd to their feet as it appeared the Pac-12 leading running back was headed for a 75-yard touchdown. But the effort was nullified after a holding penalty was called on Beavers. The Beavers followed with a trick play which ended with another offensive penalty. When it looked like the offense was about to stall, Blount found Hernandez for a 17-yard gain along the sideline to get the first down.

After faking the fourth down conversion play and dropping into a punt, the WSU punt renturner muffed the punt which was then recovered by Bradford on the WSU seven yard line.

Jefferson followed with a 7-yard touchdown run to tie the game.

OSU returned to some trickery on special teams as they used a lateral to their advantage to return the kick to the WSU 45-yard line. But once the offense took the field they failed to gain traction. Faced with a long fourth down, OSU Head Coach Jonathan Smith’s offense stayed aggressive as Blount found a receiver in the middle of the field to keep the drive alive.

Blount then keeps the offense moving with his legs after a scramble and a subsequent QB sneak to get the first down.

Now in the red zone and threatening to score, the Oregon State couldn’t pick up another 10 yards and settled for 32-yard field goal by Jordan Choukair.

The Oregon State secondary came out swarming the ball, wrapping up runners near the line of scrimmage. On third down, Minshew had good pocket protection as he scanned the field with plenty of time to throw. After rolling left with OSU linebacker Matthew Tago finally pressuring the quarterback, the throw downfield eventually fell incomplete, resulting in a punt.

Bradford started the drive flying out of the backfield with a 56-yard run, eventually being forced out by WSU’s Marcus Strong of what looked to be a would-be touchdown. WSU’s defense dug in forcing the OSU into a third down with goal to go. But the hand off to Jefferson resulted in his third touchdown of the game.

After stout defensive plays by Oregon State to start the drive, Minshew found a receiver wide open by the left sideline on an out route to extend the drive. Eventually making their way down into Beaver territory, Minshew found Martin down the sideline on a 23-yd pass play to get into the red zone.

Once in the redzone, Minshew completed a shovel pass for a 15-yard gain to get to the OSU 15 yard line. The following play, WSU drew up a play action play which resulted in a fumbled ball recovered by the Cougars for a seven yard loss. The defense continued to capitalize off the momentum gained after forcing the fumble by pressuring Minshew to roll out of the pocket.

Faced with a third and goal from the OSU 15 yard line, Minshew dumped the pass off to Williams in the flat who shed and dodged tacklers on way to the endzone for a touchdown to cap off an unconventional scoring drive.

With a 59-yard kickoff return, OSU’s first drive of the second half eventually comes to a stop at the WSU 8 yard line. Fourth down, the Beavers came out in field goal formation, only to audible showing a fourth down conversion attempt, forcing WSU to call their second of three timeouts only two and a half minutes into the second half.

The Beavers come out on fourth down with a hand off to Jefferson who kept the drive alive with a seven yard run up the middle to get the first. OSU again refusing to settle for conventional fourth down play calls is now four for four on fourth down conversions.

Knocking on the door with the ball at the one yard line, OSU comes out in the pistol formation as they again feed the ball to Jefferson for his fourth rushing touchdown of the game. The extra point was no good.

Minshew and Williams orchestrated a Cougar possesion mixed with pinpoint throws, QB scrambles, downfield running and deep passes to keep the drive moving down deep into OSU territory. Faced with third down and inches to go on the OSU four yard line, Minshew snapped it from the shotgun and hit his receiver on a quick slant only for the receiver to drop it,, which resulted in a fourth down.

On the following fourth down, Borghi ran the ball down the teeth of the defense to get WSU a fresh set of downs on the OSU one yard line. His number got called on again, but this time he punched the ball into the endzone to give WSU the lead.

On a third and short, Blount dropped back to pass, but only to be sacked on the play for a seven yard loss. The drive resulted in a 36-yard punt downed at the WSU 22 yard line.

On this drive, Minshew and the WSU offense found success with short  completions followed with chunk yardage gained by the receivers after the catch. On consecutive plays, Minshew hit receivers for 19 and 13 yard respectively.

On a third and nine from the OSU 39 yard line, Minshew found Winston cutting across the middle of the field on another short route to pick up the first down. Williams got in on the big plays on his run by breaking two tackles to pick up 15 yards.

Minshew hits the fourth quarter at full speed after hitting Harris in the endzone for a three-yard score.

Blount responded with a 46-yard bomb to Hernandez down the field. Jefferson followed with a 14-yard run down the sideline before being pushed out of bounds. Just as the offense looked like it was firing on all cylinders, Jefferson fumbled the ball with WSU recovering it in the endzone.

With WSU getting the ball back, Minshew found Bell who took the ball down the sideline for a 33-yard gain. On third down with four yards to go, Minshew finds a receiver running over the middle, the runner picked up enough to keep the drive alive.

In the resulting play, Minshew found Martin by the near-left pylon in the endzone for a 27-yard touchdown. WSU has now scored three unanswered scoring drives.

With the game slipping away and OSU needing to score on this drive, Blount took a six-yard sack, digging the team into a 16-yard third-down situation. But in the following play, as the pocket disappeared around the quarterback, Blount slipped out and took off running with defense on his heels. Blount picked up 18 yards on the QB scramble, enough to convert for the first down.

Artaivis Pierce followed with a 32-yard run behind a convoy of blockers down the left sideline. After a missed deep ball, and a short pick up, the Beavers faced a fourth and inches. Colleto faked the hand off on fourth down for the QB keeper and got enough to keep the chains moving.