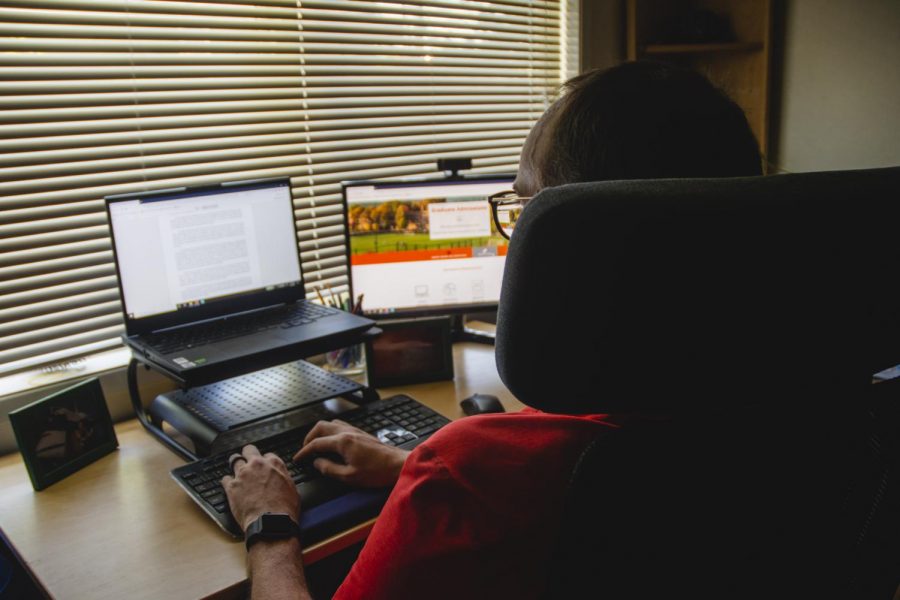 A photo illustrating one of the processes one must complete when applying to graduate school, writing a statement of purpose. Many applicants over the last year have experienced the changes in the programs due to an increase in applicants, and by proxy, competition.

The COVID-19 pandemic has undoubtedly altered many students’ plans. For the class of 2021, graduate school goals have been modified due to the pandemic, largely because of fewer available opportunities and increased competition.

Buckner knew even before the pandemic that the graduate school application process wouldn’t be easy—as a first-generation college student, he has less familial resources for navigating the higher education system than others.

Ultimately, Buckner was able to get help from his research advisor to guide him through the application process. However, he still faced a thrown-off honors thesis project due to COVID-19 restrictions, which limited his research and lab experience.

Buckner, who is working toward a career in science policy, said he had conversations with multiple graduate school professors and researchers who he was interested in working with after applying, but unfortunately, nothing worked out.

Buckner pointed to less funding for universities as a problem caused by the pandemic which impacted the graduate school application process this past year.

“There’s the whole issue of the pandemic affecting how much funding is going to the states, so the states have to read just how much money they’re affording to the universities every year,” Buckner explained. “And you know, higher education is always one of the first things to get cut.”

The graduate school application process is also known to be competitive, but Buckner said it was “intensely more competitive” than he expected.

“Anytime there’s an economic downturn people go back to grad school,” Buckner said. “It’s an easy way to pull out of reality for a couple of years.”

Karla Rockhold, the assistant director of career development at the OSU Career Development Center, echoed Buckner’s assertion. She said many graduate schools have had an increased number of applications over the past year.

This increased number of applicants during the pandemic is due to a number of reasons, including workers getting laid off from their jobs and seeking to retrain, more downtime contributing to career reevaluation among many people and because multiple graduate schools have been waiving the Graduate Record Examination, according to Rockhold.

“I think that’s encouraged people to apply to graduate school programs as well, because some people have a fear of test taking,” Rockhold explained.

Rockhold also mentioned there was an increase in applications from low-income, first-generation and marginalized communities.

More applicants means more competition, but this hasn’t been the only issue facing graduate school applicants during the pandemic, according to Rockhold.

“I think the biggest thing that’s made career planning difficult for students, especially undergrad, is a lack of internship opportunities,” Rockhold said.

Approximately 80% of internships in the United States were canceled last year as a result of COVID-19, Rockhold said, and many students struggled with this.

Beau Baca, an academic advisor for the OSU Honors College, said he has noticed the effect of fewer internship opportunities on students.

“Many students have been concerned about difficulty getting internships or job shadowing experience (this was especially an issue last summer),” Baca said in an email.

Not only do internships provide students with insight into their career desires and sometimes open up doors for job offers, but they also help build experience and resumes for those applying to graduate school.

Rockhold said resumes are really important for students—they’re a person’s “marketing tool” and the first impression one gives to employers.

At the Career Development Center, Rockhold said they have been continuing to work with students through the pandemic with a focus on building good resumes, preparing for the interview process and strengthening job search strategies.

Director of Career Education at the Career Development Center Jonathan Stoll said the center has also continued to use assessments and conversations to help students decide their future career plans in general. He said he guesses there have been more students applying to graduate school in an attempt to make themselves more marketable for when the economy rebounds after the pandemic.

Despite the struggles students have faced with graduate school applications this past year, Rockhold said she is hopeful for the coming months.

“I think the market right now is getting brighter,” Rockhold said. “We hope it continues to go in the right direction, especially with more people being vaccinated and businesses being able to have people back in person.”

“I think it’s really important that students start thinking about graduate school early and start the preparation process early,” Rockhold said. “I mean, a lot of students think about it at the beginning of their senior year and that’s kind of actually too late to start thinking about it. They really need to start preferably their sophomore year. Junior year is great, too.”

The reason for this is because going to graduate school is a big investment of both time and money, according to Rockhold. She said students need to start thinking early about whether or not graduate school will provide a good return on their investment for their chosen career.

Buckner, who is now job hunting and will be applying to graduate schools again in a couple of years, said starting the preparation process and research early is important. He also recommended focusing on getting good letters of recommendation, which was another difficult COVID-19-related issue that came up for him.