First-generation students construct their own path 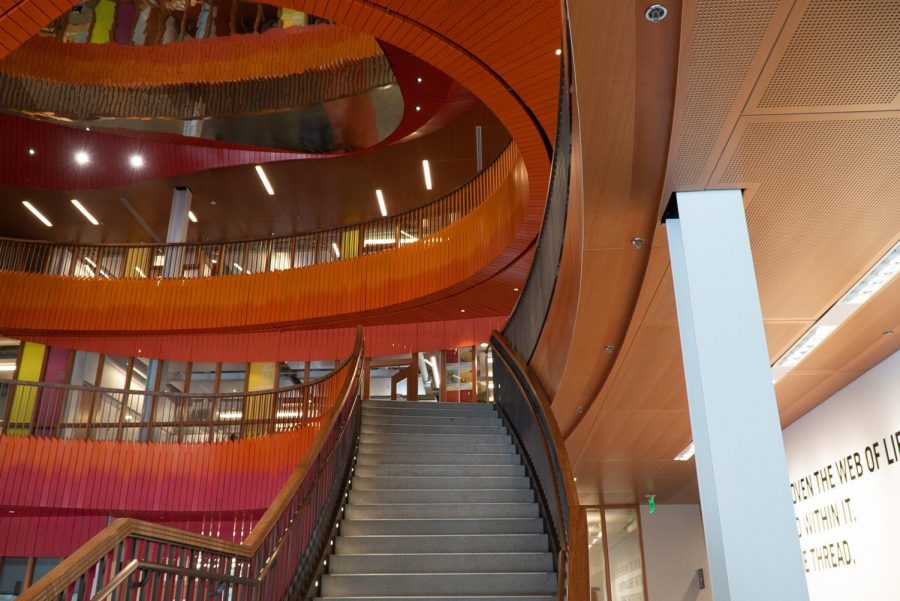 The Student Experience Center is designed to take learning outside of the classroom and houses programs such as Student Leadership and Involvement, Diversity and Cultural Engagement and the Center for Civic Engagement.

Oregon State University is home to almost 32,000 students on its Corvallis campus, some who are the first in their family to attend college. First-generation student and President of Oregon State University Ed Ray is an example of what success can look like after a higher education. Ray is just one student out of many that was able attend college and create a better life for themselves and their family.

OSU employs many staff and faculty that were the first in their families to attend college including Educational Opportunities Program Director Janet Nishihara. Being a first-generation student, she realized early on there was a storehouse of knowledge she didn’t realize she didn’t  have, Nishihara said.

“In talking with current students who identify as first-generation, I have heard them talk about not knowing some of the little things like how to buy books and how to utilize the library,” Nishihara said via email.  “More important were the big things they didn’t realize; how important it is to meet and talk with their professors, the value of internships, research and other experiential learning opportunities.”

According to Nishihara, students often don’t have knowledge on how much to study for classes or how to balance work and other obligations they may have.

OSU provides resources such as the EOP, TRIO Student Support Services, FIRST! and U-engage classes all focused on first-generation students.

“The FIRST! committee provides programs fall and spring term and also has a small mentoring program that pairs first-generation college students with faculty, many of whom are first generation themselves,” Nishihara said in an email.

Nishihara also said she co-teaches the U-engage class with Kim McAloney, academic counselor  & engagement coordinator, every fall term discussing issues that surround students who are the first in their family to attend college.

Yvonne Nguyen, a fourth-year student studying finance and economics, said being a first-generation student made her feel as if she was less prepared than other students whose parents did attend college.

“I often feel directionless and underwhelmed with the lack of opportunities presented to me,” Nguyen said via email. “Non first-generation students have parents who have gone to university and obtained a degree. From that, not only do they have years of education and a career to look back on, they have many connections and resources that they can pass down to their children.”

Nguyen said that her mother is from Soc Trang, Vietnam and after the Communists won the Vietnam War their family began to move around to find work.

“My mom ended up not finishing school and would stay home to make wine that my grandparents would then sell,” Nguyen said in an email. “By the 1980s, my mom’s family ended up having to flee the country by boat and ended up in refugee camps in Malaysia.”

Her mother is currently working at a nail salon in Oregon where the employees are predominantly Vietnamese women, Nguyen said.

Fourth-year student studying music at OSU, Maria, who requested to be identified by first name to preserve anonymity of family information, said her mother is from Michoacán, Mexico and her father from Mexico City, Mexico. Both of her parents were able to receive high school degrees but did not attend a university.

“I wanted to go to college because my parents came to the states to give me and my sibling a better life,” Maria said via email. “I wanted to take care of my family and the way for me to do that is to get a higher education and find a job that will help me help them.”

Maria said she is able to be a role model to her extended family and show them good working habits that will benefit them in the future.

“My oldest niece is a freshman in high school and she has already been thinking about going to college and what she might want to study since she’s been in middle school,” Maria said in an email. “My youngest niece is putting her efforts towards sports and the arts.”

Maria said having resources before college helped level out the playing field for her being a first-generation student.

“Someone who has gone through college has the knowledge and knows how to access the proper resources that my parents had no idea even existed,”Maria said via email. “I actually got pretty lucky and was a part of two college prep programs in high school which gave me the step up and helped me get a hold of all of those resources.”

OSU is supportive of first-generation students, while avoiding putting them higher than other students, Maria said.

“I like that OSU provides resources to those of us who are first-generation students, but also makes those same resources as available as possible to other students,” Maria said in an email. “I don’t like feeling like we’re a higher priority to OSU. I’m just another college kid like everyone else trying to survive finals and get my degree.”

Nishihara said OSU appreciates the energy, the new thinking, and the work ethic that first-generation students bring with them.

“I would like first-generation students to know that there are faculty, staff and administrators at OSU who were once in the same place that they are being the first in their families to attend college, forging new paths so that others can more easily follow,” Nishihara said via email. “They may be the first in their families to do college, but there are many who have come before them and who would like to support them.”