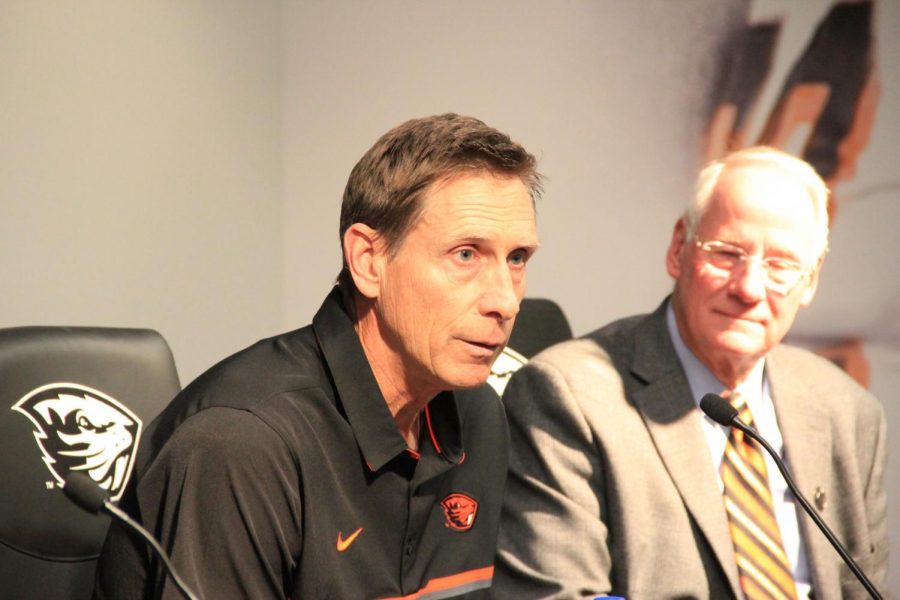 Beaver Baseball Head Coach Pat Casey announced his retirement today after 24 years with the program. At the start of the press conference, Casey stated that it’s been an unbelievable honor to be the head coach.

Within his time at Oregon State, Casey earned a total of 900 career wins, 13 postseason appearances, six visits to the College World Series and three national championships. Additionally, Casey has coached 116 players in his career who have been drafted by MLB teams. This last year, six Beavers were drafted in the 2018 MLB Draft including three in the first round.

According to Director of Intercollegiate Athletics Scott Barnes, the program Casey built has sustained excellence and will continue to thrive due to his tremendous leadership.

“It has been truly amazing to think of the impact coach Casey has had on the baseball team but also our university, the state of Oregon and collegiate baseball overall,” Barnes said. “I want to thank him for not only being the quality and character of a man we’ve all come to see in (Casey), but for what he has built.”

Barnes announced that Casey would be appointed as an associate athletic director for OSU after some time off. He also added that the right-deck area of Goss Stadium will be named Casey Corner in honor of the three-time national champion.

“We couldn’t be more delighted,” Barnes said. “Although losing the best coach in America, we’ll continue to gain from this quality individual by helping our athletic department.”

Pat Bailey will be serving as the interim head coach for Beaver Baseball until a national search begins at the end of the 2019 season, according to Barnes. For the past 11 years, Bailey has been working as the assistant coach and associate head coach beside Casey.

According to OSU President Ed Ray, Casey has been everything they could’ve ever imagined having as a baseball coach.

“I think all of us appreciate all of what (Casey) has accomplished here,” Ray said. “He’s accomplished so much and has made us very proud of the young men he’s coached on and off the field.”

In 2010, Casey and his wife, Susan, were recipients of the Nell and John Wooden Coaching Achievement Award for their dedication to making an impact on the lives of their players.

“It’s all about the players, it’s absolutely driven me to be the best I can be,” Casey said. “Those guys made me the coach I am, they allowed me to make mistakes and I’ve learned more from my players than they’ve ever learned from me.”