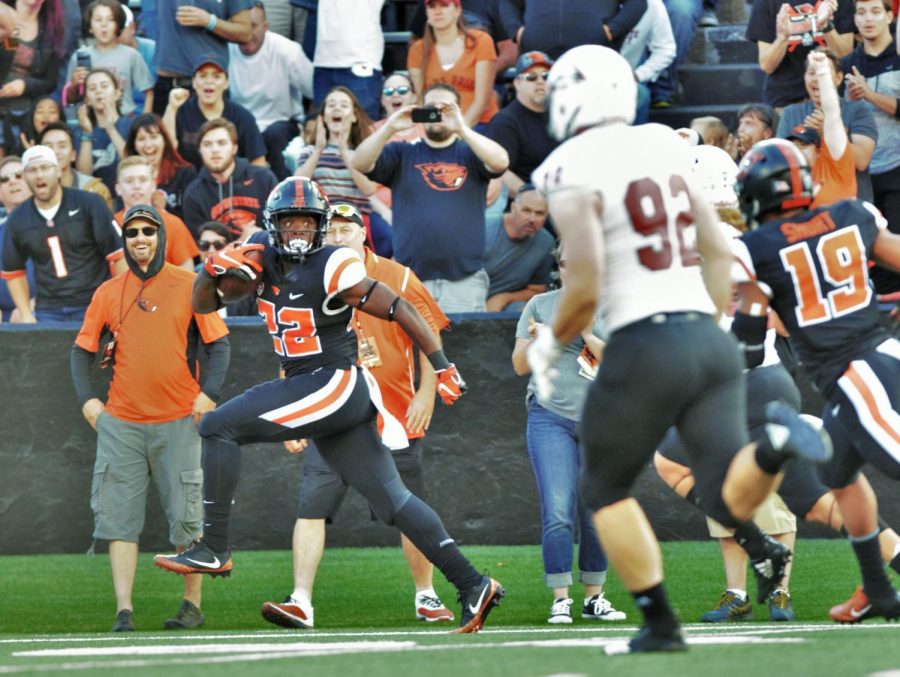 Freshman running back Jermar Jefferson sprints down the sideline for a 62-yard touchdown. Jefferson rushed for 238 years and four touchdowns on Saturday.

Oregon State Football hosted Southern Utah at Reser Stadium on Saturday as the Beavers took down the Thunderbirds 48-25 giving OSU an even record of 1-1.

In Jonathan Smith’s first home game as the head coach, his offense put up 649 total yards and six touchdowns to help earn the win. The last time OSU won a game was last season against Portland State University under then head coach Gary Andersen.

The Beavers main source of offense came from the ground as freshman backup running back Jermar Jefferson rushed for 238 yards and four touchdowns on the night. Jefferson earned the third highest single-game rushing total in school history, just one yard behind Steven Jackson.

“I’ve got to give it up to my offensive line, they did great,” Jefferson said. “They were opening up big holes for me so I could do good stuff in the open field.”

Redshirt-sophomore quarterback Conor Blount saw a majority of the snaps in the contest as he threw for 226 yards and one touchdown.

“We were keeping them off-balance. We weren’t too pass-happy or too run-happy, we had some good play calls and we just went out there and executed,” Blount said. “Every single play has an answer and it’s about finding that answer and having that chemistry.”

In the first half, OSU performed highly as they scored 41 points, 19 first downs and 454 total offensive yards. Things started to slip however, as the Beaver defense allowed 18 first downs and 18 points in the second half.

On the other side of the field, Thunderbirds’ quarterback Chris Helbig helped narrow the deficit by rushing for 44 yards and one touchdown on top of throwing for 340 yards and two scores.

“We have to mature as a group, we have to be able to finish better than that,” Smith said. “Overall I’m please but we’re not a finished product, we’ve got some work to do.”

Oregon State Football will be traveling to take on Nevada next Saturday at 4 p.m.