What happens to OSU waste after disposal? 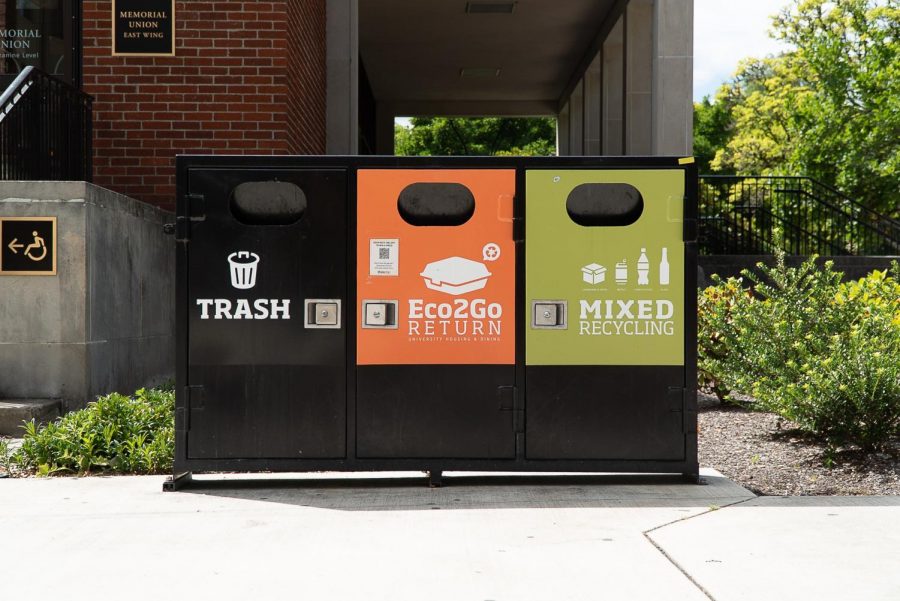 A waste and recycling bin by the Memorial Union gives students disposal options. There are many bins like this around campus to help increase recycling.

From a local landfill to a different country, the waste of Oregon State University students can end up in a variety of places depending on its initial path. Students can choose to throw away their waste or recycle it to be repurposed into a new material.

Andrea Norris, marketing and development coordinator for materials management, said trash, bottles, cans, paper, cardboard and mixed recyclables are the categories OSU uses on campus for waste management. Students can put their waste in the trash, or recycle it in another appropriate bin.

“When anyone chucks something in a trash bin on campus, it will be serviced by someone who is in custodial, then it will go to a dumpster or trash compactor outside the building,” Norris said. “Then that gets hauled directly to the landfill by Republic Services.”

According to Norris, OSU does its part to promote proper recycling practices while following the new guidelines with help from the student workers.

“We have a student crew of 30 or more who work in recycling and surplus,” Norris said. “Those are the folks who are actually picking up the recycling on its weekly route.”

OSU Recycling Manager John Deuel said after most recyclables get serviced by the OSU Recycling team, they are brought to the South Farm lot, which is also used for tailgating events in the fall. During the rest of the year the recycling team uses the area to process the materials.

“We will have two or three of the student employees sort that material with gloves and eye protection,” Deuel said.  “First we remove trash, then we sort out the glass jars and the redeemable bottles and cans.”

According to Norris, it is easier to allow glass to be a part of bottle and can bins on campus instead of adding new bins exclusively for glass, which would make it more confusing for students to recycle.

“On our sort line, because we have to pay staff to be sorting glass out, we also sort out items with value,” Norris said. “The plastic bottles and metal cans that have redemption value get sorted into different bins and we are able to sell those off.”

When a student recycles a redeemable bottle on campus, that money goes directly back into OSU to help the recycling program pay for labor, Deuel said.

“The purpose of that sort line is not to correct things that were wrongly put in a bin,” Norris said. “The primary purpose is meant to be the point where we remove the glass.”

Sorted glass is then picked up by Republic Services and transported to Glass to Glass, a glass-only recycling facility in Portland. There, they use automated technology for sorting and processing, Norris said.

“They break it up into small pieces, wash it, shake it, and after it goes through that it goes down the line and into these machines that use optical scanners,” Norris said. “A light shines through the glass to detect the color and then blowers sort the pieces into different directions.”

When a paper item is recycled in a “paper” bin, the student crew and brings it back to the warehouse on campus, Norris said. The paper is then loaded into giant boxes known as Gaylords that get picked up when full.

“The reason why we sort our paper out on campus is because it improves its quality and recyclability and we can sell it,” Norris said. “We sell it as a material and it does contribute to the recycling program at OSU.”

The paper then goes to Garten Services, a paper vendor, in Salem. They are able to sort the paper into different grades and sell it off to other markets to be made into new materials. Those materials could end up being things like newspapers, fast food packaging or cat litter, according to Norris.

Rachel Snyder, education and outreach coordinator for Republic Services, said the organization owns Coffin Butte Landfill, a regional site in Benton county where the trash in the area goes once it is picked up and serviced.

“Once you put that waste in your trash, there is no sorting it back out,” Snyder said. “Once it is there, it is there forever.”

Once paper, plastic and other recyclables are collected they are then sent to a materials recovery facility to be sorted into like materials and sold to markets like China, Snyder said. However, China is currently refusing materials due to the high contamination levels causing the facilities to find other buyers.

According to Snyder, China has put in place the National Sword protocol which addresses recycling that was being shipped into the country. With the new standards, recycled materials received must have a 0.5 percent contamination level or lower to be accepted.

According to Norris, the protocol was put into place because China was receiving large amounts of trash that was contaminating the recyclable materials that were being shipped. Norris added that she understands the basis of their new protocol.

“We need to clean up our act, because if we do we could be in really good shape,” Norris said. “If we could get our recycling clean enough that it can meet the 0.5 percent contamination rate that China accepts, that’s clean enough where people could start businesses in the United States and we could be recycling it here.”

Snyder said she knows the changes in recycling will not happen overnight. However, citizens need to put in the effort now to ensure the long-term success of the recycling process.

“We have to make sure the right things go into the bins and that they are prepared the right way,” Snyder said. “When in doubt, throw it out. Just leave it out of the bin if you are not sure, because at this point we really need the cleanest recycling we can get.”