OSU baseball takes down Minnesota in game one of Super Regionals 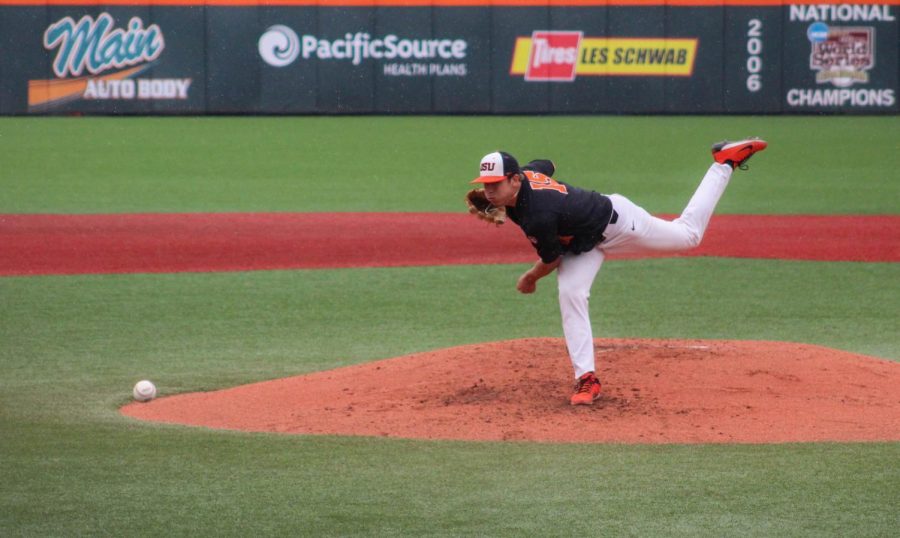 Senior pitcher Luke Heimlich on the mound, starting for the last time at Goss Stadium. Heimlich threw nine strikeouts on the day, out of 124 total pitches.

Beavers one win away from advancing to College World Series

The Oregon State University baseball team notched the first win of the three-game series against the Minnesota Golden Gophers, ending the match with a final score of 8-1.

Even in the rain, the Beavers stayed poised with senior pitcher Luke Heimlich on the mound. This would be Heimlich’s last start as a pitcher in Goss Stadium at Coleman Field.

“I’ve been here for a long time, this place has been great to me,” Heimlich said. “I love my time here. It’s definitely helped me a lot in becoming who I want to be as a person. It was a little bit emotional there at the end when I was coming out of the game, just giving everybody hugs and saying I love them.”

Heimlich ended up pitching for almost the entire game, racking up nine strikeouts and allowing seven hits off of 124 pitches.

At the top of the ninth inning, OSU Head Coach Pat Casey decided to pull Heimlich off the mound and replaced him with junior pitcher Sam Tweedt. Fans at Goss Stadium cheered “Luke” until Heimlich stepped out of the dugout to give a final curtain call.

After the game, Casey was content with the team’s overall performance.

“I thought we played really well throughout the game,” Casey said. “We got a little momentum early. I just thought our guys were sticking to the game plan.”

In the first inning, junior outfielder Trevor Larnach sent one flying over the left wall, letting himself and Nick Madrigal jog home. The next play, sophomore catcher Adley Rutschman hit a home run over the same wall, setting the Beavers up 3-0 over the Golden Gophers.

Larnach also made plays in the outfield, where he made a diving catch with his left hand to put the Gophers out of the third inning.

“I was kind of shifted over. I think it was an 0-1 count,” Larnach said. “I just got on my giddyup and started running. It carried a little more than I expected so I caught it full reach. I’m just glad that I could get the job done.”

OSU ended the game with 11 hits, eight runs and eight RBI. With one more win, OSU could win the series and advance to College World Series in Omaha, Nebraska.

The Beavers will take on the Golden Gophers again tomorrow at 6:30 p.m. for game two of the Super Regionals in Goss Stadium.