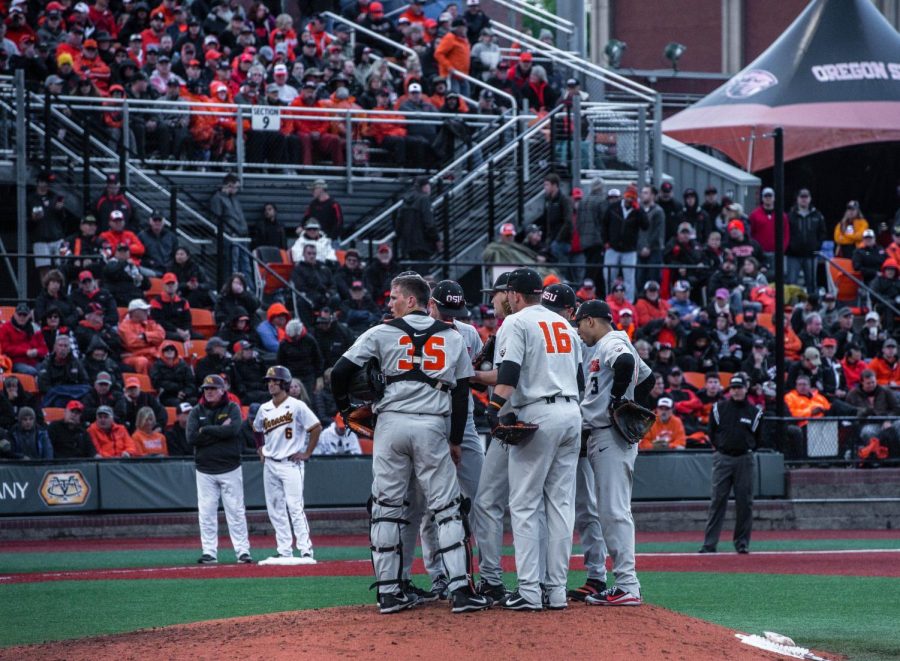 The OSU baseball team in a huddle during Saturdays game against the University of Minnesota Golden Gophers. The Beavers will go on the the College World Series, the seventh trip in program history.

With a record attendance of 4,025 in Goss Stadium at Coleman Field, the Oregon State University baseball team punched their ticket to Omaha, Nebraska on Saturday with a dramatic 6-3 win over the University of Minnesota Golden Gophers.

The Beavers (49-10-1) scored three runs in the ninth inning after the Golden Gophers (44-15) kept the score close throughout most of the game.

Minnesota responded however, slowly racking up runs over the next few innings. The Beavers struggled to keep up with the Golden Gophers, trailing 2-3 in the sixth and seventh innings.

In the eighth inning redshirt senior outfielder Kyle Nobach gave the Beavers hope with a game-tying single to right field, bringing OSU fans in Goss Stadium out of their seats.

With the score tied in the top of the ninth, sophomore catcher Adley Rutschman put two runs on the board, letting junior outfielder Steven Kwan and Cadyn Grenier run home. The Beavers capped off their win with a final score of 6-3.

“Baseball’s a weird game,” Rutschman said. “Guys get opportunities to pick other guys up, it happens all the time. From a team aspect, being able to get that hit meant a lot to the guys.”

This win marks OSU’s seventh trip to the College World Series in program history and Beavers head Coach Pat Casey’s sixth with the team. Casey was pleased with the performance of his players, especially freshman pitcher Cristian Chamberlain.

“I have unbelievable trust in what they’re doing,” Casey said. “One of the keys was Chamberlain coming in, just being lights out.”

After replacing junior pitcher Bryce Fehmel in the bottom of the eighth, Chamberlain had two strikeouts that kept the score tied late in the game.

“Bryce did most of the work,” Chamberlain said. “I just came in and tried to execute pitches.”

The Beavers will face the University of North Carolina in Omaha, Nebraska next week.